Promising steps towards hope for a treatment for schizophrenia

Patients with schizophrenia commonly experience negative symptoms, which include lack of motivation, social isolation and inability to experience pleasurable feeling. The current antipsychotics minimally improve these negative symptoms, and there are no currently licensed treatments. In addition, it is estimated that total service costs for schizophrenia in England alone will be £6.5 billion by 2026. In view of this, there is considerable interest in identifying potential treatment targets for these symptoms. However, the nature of the changes in brain chemistry that contribute to these negative symptoms is unknown.

Any important steps to look at.??

I see no future in my lifetime…

They need to find the root, underlying cause(s). My money is on a virus. I feel like it’s the norovirus, but no evidence here. Just want to see if I’m right and want to help people.

It’s like putting a band-aid on a stab wound. The cause isn’t the wound itself, per se. But the blade, or the person doing it. Is that a good analogy? lol. 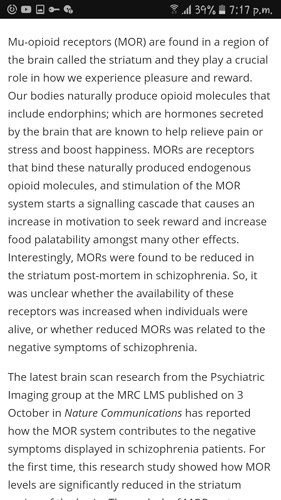 We don’t need a cause. Also they do know a cause for type I diabetes. Does it help anybody?

We need a drug for cognitive/negative symptoms. MIN-101 is good candidate but for negatives only. Maybe we need a little bit better antipsychotics. Vraylar and Abilify are not bad. But Lumateperone (if approved) will be better. Still place is vacant for a normal cognitive drug.

Also they do know a cause for type I diabetes. Does it help anybody?

You mean besides insulin? The literal cause and treatment for type I diabetes?

Insulin is treatment not cure. Knowing the root cause might produce better treatments however there probably won’t be a cure. And the root cause process might be extremely complicated (it seems to be, 200 genes involved) so it wouldn’t yield any particular benefit for the patient.

You changed your statement from “we don’t need to know the cause because it won’t help anyone” to “knowing the cause doesn’t cure it”.

Knowing the cause can obviously help people, and potentially lead us down the path that eventually leads to a cure or a prevention.

My position is that we need new treatments for negative and cognitive symptoms and given that chasing the root cause may not be fruitful the research should be focusing on helping people here and now.

Since they don’t know the cause would it be wrong to say its caused by extra sensory perception,like maby our minds trying to decipher input from parallel dimensions or another dimension

extra sensory perception,like maby our minds trying to decipher input from parallel dimensions or another dimension

Ya, quantum physics. I suffer from that too. But I think it’s still useful to find the root cause, underlying principles for schizophrenia instead of just coming out with half ass treatments that cost thousands of dollars and do very little. Sounds like just inefficiency to me. I guess that’s how we make progress. We need an Einstein for schizophrenia research. We have all these geniuses (kids too) that want to be famous programmers or rich ones and people wanting to be the next Elon Musk or Jeff Bezos or even guys trying to make us all immortal or wanting to build wormholes. I think we should focus on those that are suffering the most, now. What’s the point of being immortal if one suffers from insanity? I found out this a long ass time ago.

Since it doesn’t show up on any diagnostic tests like xray or MRI whose to say its cause is even biological. I mean medication targets receptors but what physically causes those receptors to fire up in the first place if the brain of schizophrenics is same as non sufferers. Might be an environmental cause and that’s why I think its perceiving something other worldly because otherwise wed pick up environmental cause easily

You ever hear of the quantum brain or consciousness? There might be a non-physical part of consciousness that can be uploaded and transmitted to and from something. That something might be a computer or transmitter of sorts. I just don’t know. Most people don’t know. There might be quantum biology at play in the neurons. I’m not a biology fan or nerd, but have you heard of micro-tubules?

The quantum mind or quantum consciousness is a group of hypotheses which proposes that classical mechanics cannot explain consciousness. It posits that quantum mechanical phenomena, such as quantum entanglement and superposition, may play an important part in the brain's function and could form the basis for an explanation of consciousness. Assertions that consciousness is somehow quantum-mechanical can overlap with quantum mysticism, a pseudoscientific movement that involves assigning supernatu...

I’m thinking, and I accept I might be completely wrong here, that it’ll be a case of different medications designed for different presentations of psychosis/schizophrenia that will improve things .

I’ve read that tthey proved the conscious survives outside the body. So our conscious might be partly from another dimension hitch hiking a ride in our bodies

Since it doesn’t show up on any diagnostic tests like xray or MRI whose to say its cause is even biological.

It does though. Not xrays. But they do see differences in MRI, fMRI, EEG, PET, and in the brains of deceased people with and without schizophrenia. And they have done studies on medicated and unmedicated people as well to account for medication effects.

They’re probably not more than 10 years from a biomarker based test to confirm schizophrenia diagnosis. Maybe even as a screening tool.

Knowing the cause of something is always one of the first steps towards better treatment. How can you treat what you dont understand? It’s kind of like reverse engineering.

I cant wait for a test to determine my diagnosis.

Just so i can have proof.