Haloperidol is worse than schizophrenia itself

Haloperidol is the 2nd out of ALL antipsychotics to cause tardive dyskinesia, parkinsonism, akathisia. Haloperidol made my cognition so bad that I couldnt remember at afternoon what I ate for breakfast 4 hours ago. You think haloperidol then should be really effective? In my experience 20mg of haloperidol is less effective than 2mg of risperidone. I dont get why people even get put on in the USA, i checked the prices for haloperidol and risperidone generic and there difference is only few dollars. But then people will be like: “haloperidol doesn’t cause weight gain like atypicals”.from my experience when you have completely lost to feel hunger and pleasure from food, yeah, haloperidol makes you not to gain weight. For me it was impossible to lose weight on haloperidol anyways, I was unable to exercise even 5mins a day, walking to a corner shop looked like a mt. Everest and needed to lay down.

My friend who takes 20mg of abilify daily tried haloperidol 0.25mg and said it was a nightmare, while I was on 20mg of haloperidol voluntarily because docs gaslighted me into taking it

I wake up every night 2-4 times to pee at night since starting it.

Yeah o had something similar, during the day I ised to pee so often, probably akathisia

Hmmm. We’re all different but I take haldol and my side effects are small. I do shake but it’s better than the restless legs I had on other stuff.

My current pdoc said that if I had stayed on haloperidol any longer, it would have made me into a vegetable. Im not exageratting 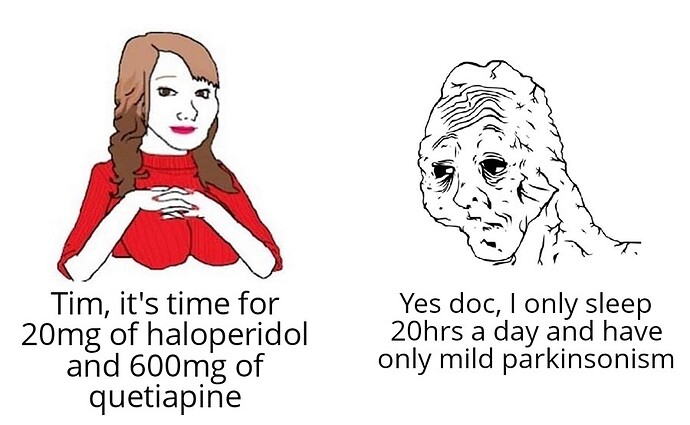 That doesn’t sound good. I wasn’t all too enthusiastic either. For me one of the benefits was, it worked quickly. And had less physical problems than Zyprexa. It wasn’t very tolerable though. I think psychiatrists should try their medications first, to know what it does, to be more sensitive in their prescribing.

All the ap’s have their drawbacks, and none of them are pleasant.

Some people say they are OK on haldol, while for others it’s really bad. But you will probably find this with all ap’s.

The trick is to recognize when side effects become unacceptable, and hopefully make a switch to a lesser evil.

I have Parkinsonism but I’d rather have that than experience psychosis again. As long as it’s not akathisia.

haloperidol works great for me with very few side effects…it blocks just dopamine…the newer drugs block dopamine AND other chemicals like serotonin.

Why blocking serotonin reuptake is bad? Its meamt to reduce the side effects of dopamine blockage. Risperidone actually blocks the same and if not more dopamine, but reported cases of tardive dyskinesia is higher on haloperidol

There have been some studies that say that actually 2nd gen drugs cause just as much TD as 1st gen. I have taken 1st gen forever and still don’t have TD. and from what i can tell, they don’t increase serotonin, they block the effects of serotonin, so basically the opposite of an antidepressant. no wonder i always felt depressed on risperidone. I believe if TD is higher with first gen, it’s because some doctors prescribe it in 1950s doses. they have since said haloperidol should not be given in doses over 10 mg…i used to take 60 mg and that was bad. But if u gave a dose equivalant of risperidone equal to 60mg haloperidol it would be awful as well.

60mg haloperidol = 30 MG of risperidone a day… don’t try that dose tho, it would prob kill u

well maybe there are different types of schizophrenia and different types of brains. haloperidol is my lifeline. i have no side effects except restlessness if i take too much at once. every other drug was horrible for me…it’s blanket statements like this that lead some doctors to refuse to prescribe haloperidol to people like me who need it, who it works great for.

I fullt understand why docs avoid it, haloperidol is onlt goos to a very small amount of people. If i was a psychiatrist i wouldnt risk to prescribe haloperidol unless he or she had tried every atypical ap

well i did try everything and they were all intolerable. and my doctor was happy to keep me on haloperidol, then she had to move and her colleague said she would not prescribe haloperidol so now i am without a doctor all because some people can’t tolerate it. it’s wrong. there are loads of people who hate risperidol with a passion but doctors still give it to u. how would u feel if they stopped because some people don’t like it.

I can’t even walk without haloperidol and my fear is someday I wont be able to get it because of attitudes like urs.

I think it is both.

People should be able to say that they hate haldol and do not want it. People should also be able to get haldol if they want it. It’s not his fault for disliking it. I think doctors should listen better to individual preferences. All are different.

I personally hate haldol’s zombie-ism. And acutely stopped when it gave me deep vein thrombosis (which is rare). Dying was not an acceptable side effect.

But I still have it here, to use as needed. It has a very specific effect, where it works fast and just kicks me out of psychosis in very low dose. Without the broader effect of zyprexa or seroquel. Because so many more receptors are hit, SGA toyed with my hormones and metabolism and everything a lot more. And withdrawing from zyprexa was like quitting an AP and AD and benzo all at once. It sucked. I switched back to haldol.

If I can, I avoid APs altogether. If I need one, I too go for the haldol.