Ashamed of being German

Sometimes people go berserk. Sometimes the leadership goes berserk. Sometimes that leadership takes a lot of people with him. Then we have a problem.
My Dad did not know enough to not side with Hitler, to defend his new country, the US. He was torn about his loyalties. At work, after the Germans won a battle, the men would sarcastically say to him "I’ll bet you’re happy, now. He was miserable and the whole family felt it.

not all germans liked hitler.

He didn’t get into office with a majority of the votes. He had a plurality, not a majority. But when Hitler burned down the Reichstag and placed himself as dictator the rest of the country fell in line. They paid a very heavy price for listening to Hitler. They had to fight in - 30 degree weather in Russia. The allies carpet bombed them day and night for two years.

Your nationality and ethnicity has nothing to do with what you are and what you do.

when Hitler burned down the Reichstag

Historians don’t believe he did it, he just took the opportunity to get full power from that event.

I have no idea why you are ashamed to be half German. It is not like you are Hitler. Even if all of Germany was evil that does not make you evil.

Because I’m quite sure we were stoned by the hating neighbors. When a society turns against a people, the people can’t fight back and end up turning on themselves.

I posted about my family’s experiences before. See below…

Being a German American was difficult

This brought back memories of my childhood in a small Midwest town. My parents immigrated from Germany to the U.S. a few years before I was born. We were treated very poorly by some of the neighborhood kids. We were called “krauts” and other slurs.

Once a group of boys threw rocks at my older sister and chased her home. Fortunately, she was able to run faster than them. If they had caught her, I’m not sure what would have happened.

Early one morning, a group of boys shot a barrage of marbles at our house using slingshots until my parents chased them away. I was pretty happy when I was able to collect hundreds of marbles from the front lawn that had bounced off the roof and house. Marbles were pretty popular back then.

One time, my little brother (he was only 3 or 4 at the time) was riding his tricycle on the sidewalk in front of the house and some much older neighborhood boys tried to steal his tricycle from him. He started crying and my mom could only get the boys to stop by grabbing a broom and chasing them away with it.

The neighborhood kids told us often that we were going to hell because we weren’t Catholic like they were. We were Buddhist which was unusual for German immigrants and especially for a small Midwest town.

Ultimately, my parent’s solution was to move the family to California when I was ten years old. Even back then, California was known for diversity and being more open-minded about things like religion and birth country and so forth. I have lived in California ever since.

chordy hitler era is past u shouldnt feel ashame

Feeling national shame is as German as it gets. 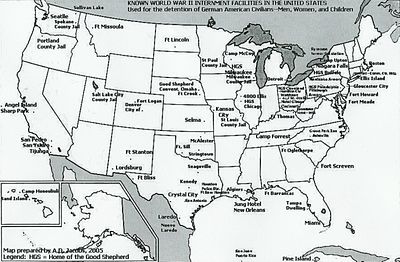 Internment of German resident aliens and German-American citizens occurred in the United States during the periods of World War I & World War II. During World War II, the legal basis for this detention was under Presidential Proclamation 2526, made by President Franklin Delano Roosevelt under the authority of the Alien Enemies Act. With the US entry into World War I after Germany's unrestricted submarine warfare, German nationals were automatically classified as "enemy aliens." Two of the four m...

My grandparents came to the US from Germany in the 1920s. They obviously left some family behind. One of them owned a general store. He was not a member of the Nazi Party and was frequently having his windows broken and things stolen from the front displays. He joined the Party in an effort to stop the Nazis from vandalizing his store, and it worked. This was circa 1937 or so. His shop survived WWII, and after that, I have no information on him to provide. It’s just a weird thing to think “Hey, you have a distant relative who was in the Nazi Party.” But if you look at it through the lens of doing it to protect his livelihood and not having political involvement, it becomes a little more palpable.

You shouldnt be ashamed, do you know how much people love German cars? And i have a German friend, heavy drinker and smoker and still look sober. Haha

I’m from England, we have no resentment towards German people.

There’s more give and take since you are closer to Germany than the US is. Part of my shame is due to my illness and also the paranoia of my father. Low self esteem was the result that hurt he worst.

Hitler is an extreme example but most nations have something they are ashamed of. Either in the past or the present. i.e. the U.S. with slavery and decimating the Indian population. Many other nations have oppressed their minorities and treated certain populations poorly or started wars. Only a few other nations in history have come close to committing the atrocities on a scale that Hitler did.

Everyone German ive met is so so proud of their country !!

They all hate Hitler aswell, naturally !

What is eqs? I 've never heard of it.

Short for emotional intelligence. You should never lie about the history of the world.

You lie about the history of the world all the time,

Or at least distort the facts.

Remember when you said you hoped none of the Nazis got hurt dealing with those Jews?

Dude chill… It’s a name… And you have no control over your name or your heritage you weren’t involved in that… And I don’t put any blame on you… My grandmother’s maiden name was Swzicer… Not 100% sure how to spell it… But the point is I’m of Jewish decent… I do NOT put any blame on you, you are welcome as a friend in my life… You did nothing wrong

What about those envoirments including the one you live in? Not setting peoples brains off right is more than a human rights violation. The truth is finally coming out in this country if not the world. You should never lie about the history of the world. Theres going to be serious consequences to it. Things happen for a reason.