What do you eat?

I’ve read all of this stuff in my books about schizophrenics having terrible diets, a common thing amongst us, kind of like how most of us drink coffee and smoke cigarettes. What are some of your staple foods? I eat lots of chicken and whole grain products (bread, pasta) and protein whey, as well as rice and kashi cereal.

I live in Salmon country. Salmon and more salmon. Salmon sushi is great here. Because of my sis, noodles and more noodles. Due to the mexican part of my family… amazing fish tacos and tortilla soup.

I eat lot of vagetables, and once what ever my mom cooks.

lol how did you know?
yes its in the morning afternoon all about
coffee and cigarettes

in the evening i try too eat,
but nothing fancy, like pasta,burrito`s bread. etc

I grew up raised by wolves in new york city, lived on hamburgers, pizza, and cookies.
By my mid 20-s I was still like that, working in IT jobs and living on coffee for breakfast coffee for lunch and cookies and milk for dinner, a whole box of entamens cookies every night, or a loaf of jiffy cornbread for dinner when i was a broke new york city bike messenger. I do think that kind of diet helps building psychosis and exiting reality.

By the late 20’s i had developed “ghost bugs”, seemed like some kind of extreme allergy, but every doctor i talked to said it was a textbook psychiatric condition.

I stayed away from the meds till my 30’s, when acting up at a job, they forced me to see a psychiatrist, i said i was just practicing irrationality willfully, which of course i am, and they hadn’t seen my style before so they said they thought i was having a psychotic break, they thought i had no memory of all the crazy stuff i had said, but of course i do, anyway, went to see the pdoc about 5 times. he said ok you can go back to work but i really would feel better if you would start taking meds.

I didn’;t, but years later i walked in to a pdoc office, said i want the meds for ghost bugs, and after a 45 minute monologue this little girl who doesn;t know me hands me 25 mg samples of seroquel. I go home and get some sleep but then i call and say now i feel like a crazy man in the morning, so they said eat more, in the morning, and in the afternoon too, had me up to 600mg a day, then I realized it wasn’t helping with the itching, just made me drowsy.,

by 45 i went back to pdocs saying please, help, i can’;t manage it anymore, give me a lobotomy, give me shock treatment, give me heavy meds.

they tried haldol, orap, seroquel, ativan, an antidepressant with a D at the beginning, maybe a few other things, nothing helped.

They said science has nothing to offer you, you’ve been very sick for a very long time, you want help with suicide go do suicide by cop.

So I went home, stewed in the psychosis of the itching.

Gave up all food, fixed it.

Got hungry, ate again, broke it again, and that’s how it goes, on and on.

Was eating the last few days, working hard over the weekend on IT support with almost no sleep in 50 hours.

today I tried to sleep, after eating a meal - pancakes and chicken and potatoes - and for the last several hours i am itching uncontrollably, wish i could get some sleep but not even trying at this point, it’;s ridiculous, bugs doing superbowl touchdown dances in the endzone all up and down my flesh…

it’s all raw vegetables, no carbs, no sugar, no calories, must be like a couple hundred calories a day.

maintains my physical and mental strength, both prodigious always.

fasting beyond that brings on physical weekness and mental confusion in two to three days.

it’s kind of like anorexia, i’m down to 118 a week ago at the doctors office for the flu, eating antibiotics now, feeling better, even fatter from the pancakes, but hella itchy, guess i’m just too insane for pancakes…

just like we have two lungs, two kidneys, two eyes, well, we have two brains, see this recent book: 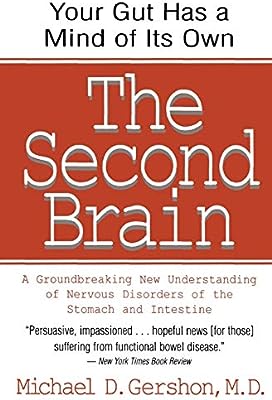 The Second Brain: A Groundbreaking New Understanding Of Nervous Disorders Of The Stomach And Intestine

so you gotta manage both brains when you’re insane!

Mostly bologna, hot dogs, chicken pot pies stuff that are cheap and easy . I also eat whatever my mother in law cooks or my partner cooks. Today it was cheese burgers and seasoned fries, tomorrow it’s steak fajitas.

I’m on a gluten free diet, so not a lot of variety. I eat lots of protein and fruit for almost every meal. That’s in addition to my copious amounts of caffeine and nicotine!

Lately I have been eating brain friendly foods, trying to help my depression. Avocados - Bananas -Cold water fish-nuts- deli sliced turkey - Lets see how i do, I should be healthier physically anyway - I’m hoping.

@wonderdonkey
My acupuncturist told me I have issues stemming from my stomach. Stomach is earth and family and can cause lots of problems.

I try to Eat lots of raw and fresh organic fruits veggies soups, I’m allergic to wheat so I eat eat quinoa pasta, free range eggs with potatoes onions garlic, no meat as I can’t stand killing and torture of innocent animals that have been factory farmed. Hmm Idk guess that’s it?

yeah i got celiac, but way more sensitivity than that,
no cheese, no eggs, no nuts, no beans, no quinoa,

I don;t really think it’s the gluten i honesty think it’s the calories,
some schizophrenics are known to go totally nuts on the slighest drop of caffeine,
that sure is me, and even with out the caffeine,
i find i can go even more nuts, by keeping the vegetable diet at 300 calories a day,
for a week or two, then go boom! to 10,000 calories a day - 2 entrees at the restaurant three times a day plus snacks - the superbowl player mvp diet - like our country’s greatest swimmer, that guy who lives on pizza,

calories go in , thought blossoms, keep that up for a couple of days, brain springs a million leaks, can’t handle that kind of a roaring flow, gotta cut it off to recover.

sushi and salmon are some of my faves…my dad sells fish so we eat alot of fish.

Why gluten free? I know theres a big gluten free thing but ive never heard exactly what the rationale behind it is

There are a few reasons for the gluten free diet. Most people who adhere to it do so because they are sensitive to gluten and have gastrointestinal problems, such as celiac disease.

The phenomenon isn’t completely understood however. One theory is that gluten activates opioid receptors in the brain and acts as an intoxicant in schizophrenics. This is just a theory right now.

But I thought I’d give it a try for at least 4 months and see if, by some chance, I was part of the subset of schizophrenics who benefit from the gluten free diet. So far, I’m on month 3, and I have noticed a reduction in paranoia.

As the whole theory of schizophrenia and the gluten free diet is not well-understood, I can’t recommend it. But, for me personally, it’s had some positive effects.

Here is an analysis of the theory from Psychology Today:

“The bottom line? Schizophrenia is a progressive and destructive psychotic mental illness that, at the moment, can sometimes be managed with medications and community therapeutic support, but does not have a cure. It seems that a certain subset of schizophrenics have an unusual immune response to gluten and other various wheat proteins, and in a small number, going wheat-free has been extremely helpful. A gluten-free diet is safe and doesn’t have side effects - I don’t see a good argument against giving it a try for anyone with schizophrenia who is willing to give it a go, at least for three months. The worst thing that happens is you find you are not one of the gluten-sensitive schizophrenics, and you’ve gone without bread and pasta for a little while. The best thing that happens is that your symptoms get better, possibly quite a lot better.”

hey i have a theory on why this works;
of course it’s a psychotic theory in now way endorsed by science,
so turn away if that kind of thing upsets you.

why do the carbs cause the sz symptoms?
in me it is any carb, as they all become sugar.
read about the parasties, from sites about leaky gut syndrome and candida overgrowth,
and they’ll tell you the bugs eat the sugar, eat the carbs,
one day an emt guy wheeling me into a psych hospital
was joking with the other emt guy about how hungry he was -
“gotta feed the worm” he said.
also, the ancient taoists have a belief about grain in the diet.
the ones who want to be immortal cease to eat grains.
the resoning they use is the same as mine - bugs;
they say there are three big worms in the human body,
these worms push you toward death as that is their goal,
and so if you cease eating the grains you starve the worms,
and if they don’t completely die and go away,
atleast you quiet them with a no carb diet.
google “mind control parasites” and you’ll see
that science knows about ants and grasshoppers,
who occasionally get infested with fungus,
that fungus takes over their minds,
and they do things that make no sense for their species,
sacrificing their lives for some bizzarre irrational action,
that action making perfect sense for the parasite,
who’s got very specific plans to implement after the host’s death.
the only psychotic and unique piece i am introducing here,
is that this is happening in us as well,
we feed the worm, and the worm controls the mind,
pushes us toward our death.

i thought a few years ago i could starve the worms,
and eventually they die and i can eat food again.
after several years experimentation,
i have to accept that the worms are always there,
always waiting,
starve them for a month and it takes them time to get up to speed
when you start feeding them again.
for that one week i can eat and not suffer.
the sufering begins after several days, i stay addicted to sugar
for another week or two,
till my symptoms have me at rock bottom,
and there is no other choice but to
shut the entire digestive system down.
that or suicide by cop.
i chose life.

i am a vegetarian, so i bake and make bread, cakes ,slices…grow own vegies, have chooks for eggs, i do not eat anything with colours ,preservatives or anything unnatural.
but i do have coffee, but i grind the beans and make it fresh.
take care

Hmmm im open minded about food and vitamins and all that stuff. I take Niacin and vitamins (my weightlifting supplements happen to be loaded with them) and I feel pretty awesome when I take them. I guess I could eat rice instead of wheat products for a while. Thanks for the idea!

for me rice is as bad as a candy bar, turns to sugar, generates hallucinations.

the no sugar diet can’t have rice, that’s the worms demanding some kind of payment.

we don’t work for the parasite and we don’t have to eat his food for him.