Solian or amisulpride is the best anti-psychotic

I take solian or amisulpride. It is the best drug out of all the anti-psychotics for me and I’ve tried several other anti-psychotics. Solian has fewer extrapyramidals/ side effects It gives me euphoria as a pleasant side effect, keeps me so calm and relaxed and blocks out voice or auditory hallucinations for me. It is so good, I’ve gone into a remission of paranoid schizophrenia on it. It treats and stops depressive symptoms too. I take only a low dose of 100mg oral solution but the average dose is 450mg.

I’ve been taking solian since 2007 and been discharged from the psychiatrist and gone into a remission. I’ve had good blood test results on it all the time. The only side effect I get is drug induced diabetes on any anti psychotic. But not many people get diabetes as a side effect. Normally off the drug, I have no diabetes.

I highly recommend solian as the best drug. It seems to be milder than some of the other anti psychotics which have worse side effects. I get no severe motor agitation, no hypertension, no dystonia on solian but which the other anti psychotics have given me. A wonderful drug that makes me seem like everything is peaceful and joyous. I don’t get anxiety or depression on solian as i may normally get from time to time, as solian stops me feeling anxious and depressed. In fact solian is used to treat depression too. A wonderful drug from God’s pharmacy.

Well, the wonderful drug Solian did give me severe akathisia and blurry vision, even suicidal ideation for a day or two. I had to come off it…

sorry to hear that dear Andrey. I’ve been on it since 2003 and it’s a wonderful drug for me. Some say it’s like lolly water, so it is milder than the injections and other stronger anti psychotics.

Other friends of mine have taken solian and they’ve loved it with no bad side effects dear Andrey. I’ve never heard of suicide ideation or akathesia on solian. It’s a milder drug. It’s possibly a rare side effect you had or relates to something else. All the best.

It is possible that my dose was damn high. I used to take 800mg…

amisulpride couldn’t stop psychosis.
I was on 800mg sometimes…

@Om_Sadasiva,
Well I was on 50mg and 100mg and it stopped all the hallucinations and psychosis for me. A wonderful drug for me. I’m in heaven on it. It is so calming and I feel at peace. All the best dear @Om_Sadasiva. huggies.

Ya dear @Andrey, 450mg is average. I was only on 50-100mg or 1/10th average dose. 800mg does seem a high dose. I think one gets more side effects on these drugs at higher doses, only logical. All the best, hugs. We need to pray for safer anti psychotic drugs for sure. I’m drug-sensitive, all the other anti psychotics failed for me, solian was the only one which was milder and with fewer side effects. Have a great evening Andrey.

good for you brother…

I think Solian (amisulpride) is an excellent med as well. I have had great results on it since I started taking it in 2013. Been stable on it. But need a little olanzapine on the side to deal with deadness. I take 200mg amisulpride it’s the lowest dose i found works for me.

wow dear @Hadeda, 200mg is a low dose and that’s really good that you’ve had great results on solian. Do u get a peaceful feeling on it or euphoria? It says euphoria is a side effect lol.

I would actually do better on more (I used to take 400mg) but when my pdoc wanted to raise my dose i told her I’d prefer to stay on low dose bcuz if all my symptoms would go away I’d not think I have sz anymore and would want to come off meds again.

I don’t notice any euphoria really. In fact if I don’t take 5mg of olanzapine along with the Solian I’d feel dead with negative symptoms.

Hey @Hadeda Ya I love my life on solian, just feel normal again but with more peace and calm and joy and a high for life.

not sure dear lovely @petar_pan, but i know my uric acid has been really high on all anti psychotics and less with solian. Also blood lipids like cholesterol and triglyceride have been a little up. But Ya solian has fewer side effects and is a wonderful drug. Sorry your prolactin levels were too high. Have a great evening up with the owls.

im glad it works for you

psychiatry is nowhere but trial and error

Ya it doesn’t increase my appetite. I found that olanzapine increased my appetite and gave me drug induced ketoacidosis with blood sugar level of 50 in hospital, highest on record in years. I almost died on olanzapine. Doctors had to stop the drug. Ya, no solian blocks alll my auditory hallucinations and stops psychosis for me. I’m still in love with solian lol. It’s the best thing that’s happened to me haha. All the best dear @jeroenp. Hope you have a nice day.

I heard alot of good stuff about it. Too bad they don’t have it in the US though.

Ya dear @Johns774, Ya too bad they don’t have it in the U. S., unsure why. Ya because it’s not as strong as the injection, but still works excellent and with less side effects than the other major tranquilisers/ anti psychotics. Ya so what do u take dear lovely John? I’ve been on several but the only one that worked for me was Solian. My Psychiatrist said the rest ’ failed’, as they had really bad side effects. This is a pic of ’ Kath and Kin’, good old Australian drama haha. Take care brother, hugs. 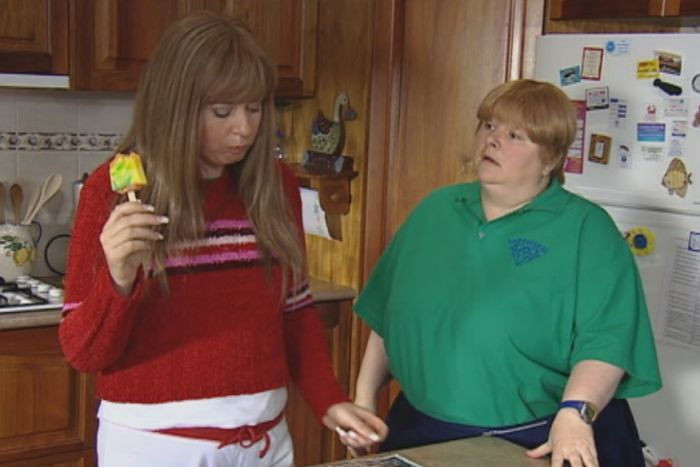