Poll : How many of you think you would have been locked up in an insane asylum if you were born 100 years ago?

How about you, do you think you would’ve ended up in an asylum?

There is an inside joke in there somewhere.

It wasn’t meant to be a joke @DrZen . I seriously think that’s where I’d be if I was born 100 years ago.

I have a relative who grew up in one. That would’ve been about 70 years ago.

With no meds to bring me out of my psychosis, I don’t see it working out any other way.

I would have been a ward of the state…

I was definitely at the mercy of my doctor. One would have locked me up, another would let me go.

I probably would not have gotten the chance to be permanently institutionalized because I’m sure I would have done myself in before that happened.

I would have been some kind of pagan goddess,

Or in an insane asylum.

Depends on where you’re born.

Definitely yes. When I was fully psychotic, the government had hacked my mind and was trying to push me into hurting myself. The whole world was in on, the newspapers TV shows, Etc. There is no doubt in my mind that even 50 years ago they would have locked me away and thrown away the key

This is unfortunately happening to many people worldwide. Not just a thing of the past.

Given I have a uterus as well as some sort of mood disorder, I would have been locked up for hysteria 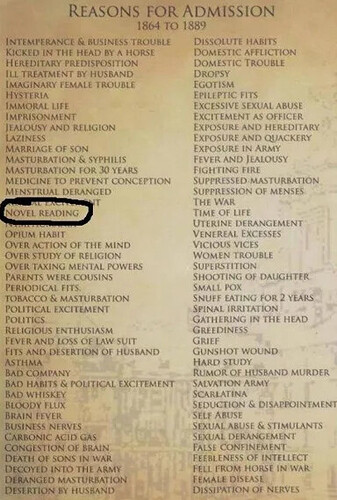 I would have been sprayed with a hose, beaten and labotomized, I was really far gone when I was psychotic, I was med resistant up until 30mg zyprexa
I still got tazed and beat by cops, and tied down and injected a couple time in my first hospital stay but it’s better than what would have happened that long ago

Notice most of these are geared towards women. Figures.

I read E. Remarque “black obelisk” that some schizophrenic patients just would come back from psychosis and act natural for some time. Then thry were released back into their families for time being

Anyone who thought they would have escaped the system is lying to themselves.

Fact is there was a world with no meds, and locking people up was the only option

Even people who just did minor things and were regarded as purely odd were sometimes locked up in those places.

Very sad times for people like us, but we’re much freer now

Could of used my talents for charlatanism “spiritual readings”

Really mess with the normies with puffed up ghost and medium performances.

Could of been a great. Lol