Mohammad Ali died. I can't believe that nobody mentioned it

Arguably, the best heavyweight boxer that ever lived. He may not be number one but he is definitely in the top three. There may be better fighters but he was definitley the best boxer.
Mohammad Ali. He floated like a butterfly and stang like a bee.
Mohammad Ali. “The Greatest”.
"The Mouth that Roared"
At his peak he was the most recognized man on the planet. In his day, in the sixties and seventies people really cared about boxing. Title fights were televised and watched by millions of people. He beat the best boxers of his day. He beat Foreman, Frazier, Liston, Norton.
Anyway, he’s definitely my favorite boxer.

I’ve heard of this great boxer. But can’t remember his nationality.

Oh, I see, he was an American

Whatt?1 when i heard nothing about this…

It’s all over the news here in Canada. I’ve been watching for quite awhile. Sports Illustrated a few years ago named him the greatest athlete in history. And I believe he was. He was also a champion for civil rights. The world is mourning a great man or “The Greatest” as he would say.

Yes, commercials bother me, too. They target the general population and are often very rude and cruel to the poor and sz people since they know we can’t afford most of their stuff. Some say this is delusional but it sure seems real.

Yeah, I’m sad to hear of Ali’s death.
My Uncle died from Parkinson’s also - it’s a terrible way to go.

I’m watching Specials on His life - I am surprised to know that he had lots of children - 9?

May he Rest in Peace - He was a Boxing Giant and will be missed.

He would have lived longer if he hadn’t boxed. His parkinsons came from boxing. I guess it was worth it to him. There was another boxer of that era named Jerry Quarry, and he was almost a vegetable from boxing when he was fifty. He died young.

That’s terrible to hear. I’m too young to have actually seen his fights live, but I enjoyed watching them on tape. I also always admired him for his stance against the Vietnam war.

I guess they likely also had that CTE (chronic traumatic ensophalopathy) thing from hits to the head.

I wish there was a way to protect our athletes from severe injuries. They basically sacrificed their lives for the game.

I’ve been sparring in kickboxing and the risk of soft concussions scares me. The headgear is not the best protection, as the brain still rattles inside the skull, despite the external protection. I guess you have to really love what you do to do it despite the risks. I know that’s the only reason I do it, for the beauty, precision, mental clarity, and adrenaline.

Muhammad Ali was my hero growing up. He was so talented and I watched all his fights when very young. He was an amazing boxer. sad.

Never gotta see him but he was obviously a great competitor. Rip

Ali was the Greatest and he will never have an equal. That’s something he had in common with the chaps in this picture. 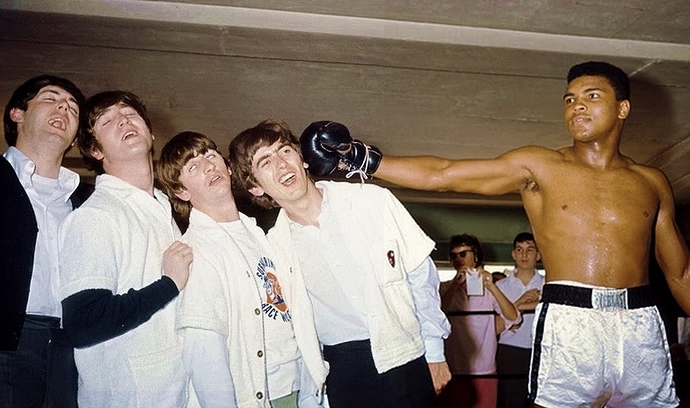 They Don’t make em today like they used to

He will always be the greatest.

I went to sleep hearing about how hee was doing on the news. He seemed ok from what they said.
I woke up this morning…and it caught me off guard