Since I was never able to respond… 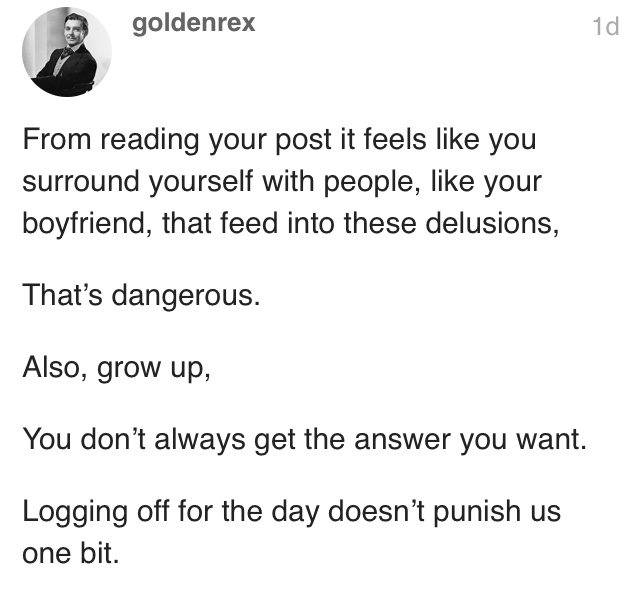 Does being rude to people make you feel good about yourself? 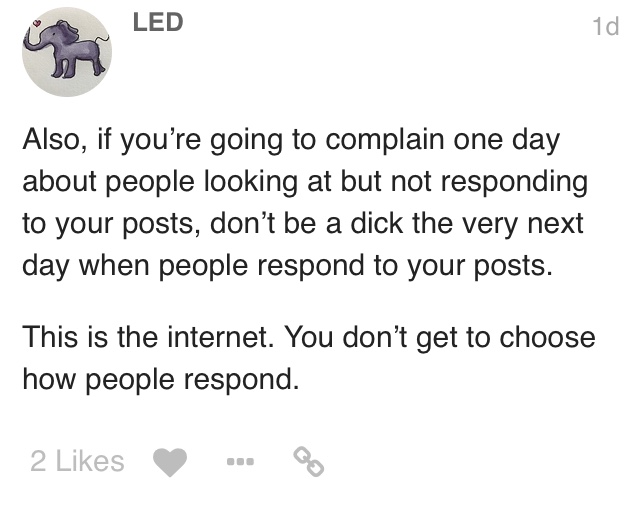 I actually thought you were being rude to me on the say anything thread, but I thought I must have been paranoid. But maybe I was right? Did you actually try and make me feel bad?

If you have paid attention to any of my posts you might have remembered I actually suffer from a lot of things! I’m not psychotic because of a personality disorder, I’m diagnoses with psychosis nos and I have been dealing with serious psychotic episodes for almost 7 years. I also suffer from generalized anxiety, and just because I have that doesn’t mean I’m not psychotic. You don’t want to be ignorant, right? 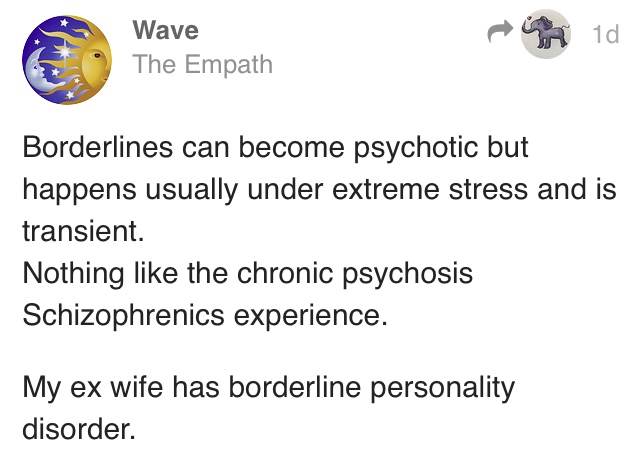 I’m hoping I’m misunderstanding what’s happening here? Because it sounds like people are trying to minimize my psychosis because of a personality disorder. And that’s really not a nice feeling.

I think it’s awful that lately I’ve seen many users question others diagnoses. Like people who don’t have sz don’t belong on this forum. People blatantly saying they don’t ‘believe’ that certain users have sz.

I think it’s a very shitty thing to make somebody feel like they don’t matter. Or they don’t belong. Or their struggle is somehow less then yours. I knew that people would say mean things, that’s why I didn’t even turn my phone on until tonight. I didn’t want to deal with the stress.

And that’s why I’m not participating in this forum anymore. I don’t feel welcome. I am far more sad then when I first came here.

I hope you decide to stay @valiumprincess.
I don’t think anyone was trying to hurt your feelings or attack you directly. If things got heated, that’s just something that happens from time to time.
I think your opinion is valid and I enjoy your posts. Maybe it was a mistake to get so angry when people responded with advice. Just like maybe it was a mistake for anyone to get angry with you.
I know you said not to say certain things, but I think people were responding a certain way because they just saw things differently than you and they responded with their best advice.
If they would have had to not say what they thought because of your requests, there wouldn’t have been anything for some of them to reply with.
I hope you will reconsider, I think you have many friends here who would be sad if you just disappeared. Myself included.
BTW I still remember when you quoted Bukowski. The quote reminded me of why I loved Uncle Buk so much and of the time I started reading his books back in the late eighties. A wonderful time for me, when I was actively pursuing art for the sake of art and was full of optimism for the future.
Over the years, I was so ■■■■■■ up that at times, that I was very unhappy.
But I’m doing so much better now. And I just want to say I have real faith that most of not all of you will eventually find your way and also find a place in this world for yourselves again.

And my kitty is now in love with you and will be heartbroken if you break up with him after the two of you just started dating. At least in his innocent kitty love-boy mind. 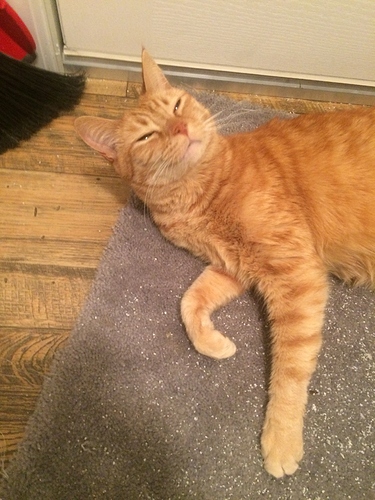 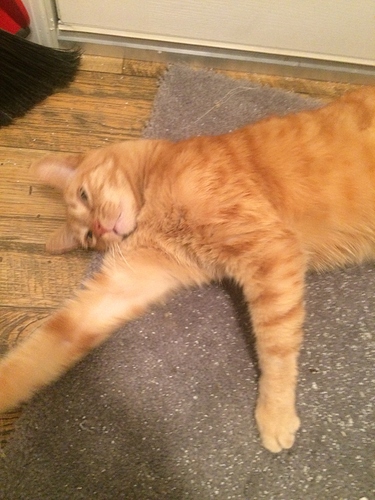 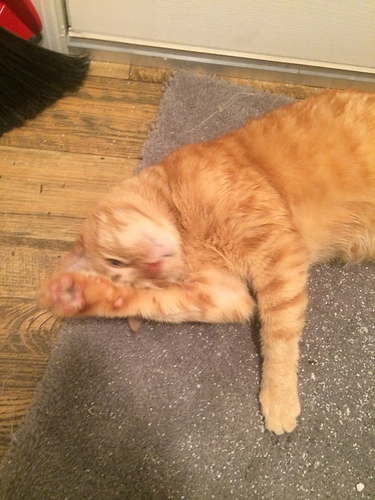 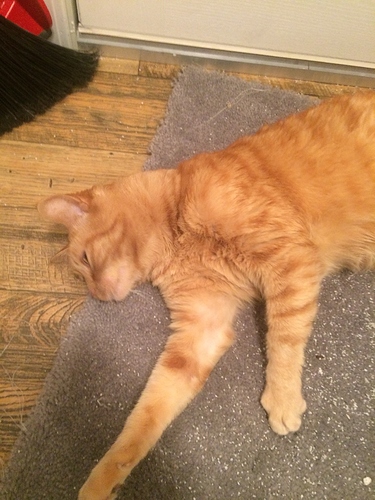 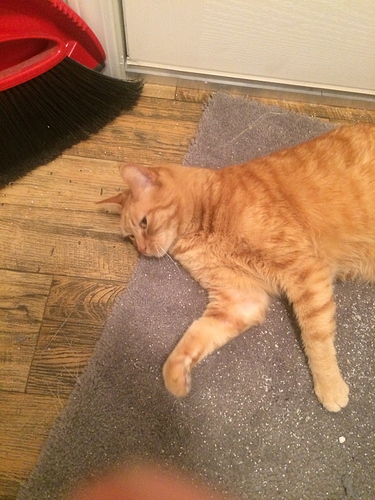 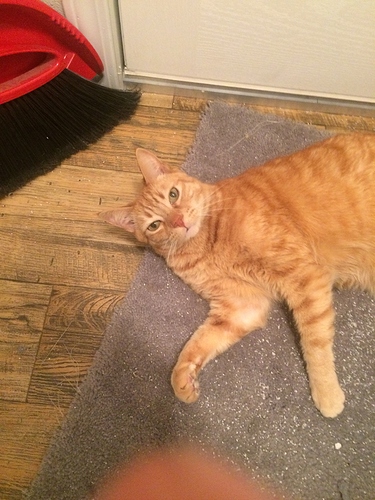 This is true I swear. I was trying to get his attention. He was just ignoring me as usual. Then I told him that you were sad and were thinking of going away. I literally said “dude, your new girlfriend is gonna leave if you don’t send her some love!”
That’s when he finally looked up.

I didn’t see it as anyone trying to minimize your experience, more like trying to understand what was going on.
It’s impossible to remember the various diagnoses of everyone here, and if the thread hadn’t been closed, I would have chimed in because I too want to get to know Borderline better. And I too think it seems like an illness with psychotic features, but I don’t know.

I didn’t see it as anyone being rude to you either.

You can’t post an alternative belief and expect the only response to be “oh, that’s cool”.
One of the things we do for each other here is reality checking. If you post something that can be questioned, putting a disclaimer in the opening post won’t keep it from getting questioned. If anything, it’ll make people more curious as to why you won’t have it questioned, and it’ll make you seem stubborn and delusional.

It’s not everybody else’s fault that you react badly to being opposed. You might not be able to control it due to your diagnoses, but you’re damn sure able to control how you act on it. At least you should be.

If you want to surround yourself with people who agree with you because that’s easier for you than learning how to control your emotions, that’s your choice. Just don’t expect us to be those people.

Hi @eighteyedspy23 which breed is ur cat…!!!

Hi @far_cry0.
He’s just a cat from the local pound. We got him when he was just a tiny little orphan.
He’s a tabby, not sure if that’s considered an actual breed.

I think it’s a ginger breed.

U are kind person brosky…!!! Hows ur girlfriend …

She just went to bed @far_cry0.
We had a good night. Today the plumber came and tried to charge us $95.00. But we called the park manager and they took care of it cause it was the main line. Next time there’s a problem we have to pay though. We baked a ton of chocolate chip oatmeal cookies to give to the manager, the plumber, and some of our neighbors. And we have a whole coffee tin of cookies for ourselves too!
Enjoy your walk. And I hope you feel better too.

Did you actually try and make me feel bad?

No, I was trying to be nice, but thanks for throwing that in my face.

I have a bad memory, but thanks for throwing that in my face, too. Do you remember all of my diagnoses? You don’t have to be mean. If you’re leaving, what’s the point of coming back just to hurt people’s feelings?

@Wave @anon54386108 You should get a chance to respond. After that thread yesterday where people were not being very nice or patient with each other, valiumprincess wants to leave. The only reason I’ve not complied with her request to me to have her account anonymized yet is because she posted this thread, and I see it as an attempt to figure out why she’s feeling hurt and to clear the air. If you have something constructive to say here, please do. But please avoid angry posts. The forum does not need more angry posts between any of the people here. I’m sure that both of you have the self-control to be polite and understanding.

If I’m misunderstanding something, send me a PM and explain it to me.

Glad you had a good night

We had to have the main line from street through under house replaced. Trees busted through…our house is only 9 years old, but they put a camera through and yup…don’t ya love spending money

Strays ftw both my fur babies are

@valiumprincess I’m sorry that you are having a hard time now but I wasn’t trying to minimize your experience or diagnosis.
I was speaking in generalities when I was describing what it feels like to have borderline - it’s text book stuff.

I cannot speak for other members here but personally I wish that you would stay and again I’m sorry if you took my words the wrong way.

hey @valiumprincess sorry you are feeling bad, its not nice when people are rude to you,

i will respond by repeating i very well known phrase that was used in the old forum:

please be civil and supportive

I’m taking @valiumprincess side on this one, idgaf

I guess I didn’t see that post but I screwed up last night by bashing another member’s home state so I’m imperfect and I mess up from time to time but I don’t think we intend to hurt each other though.

As to your dx I believe you are welcome here and if this site helps you I hope you stick around.

Drama is lame. I hope you are fine valiumprincess. I would feel anyone with psychotic symptoms should have the freedom to be alright here