Is 5mg of Olanzapine really a 1mg of risperidone?

I found few charys saying that 5mg of olazanpine is only 1mg of risperidone?

No, they are different meds.
Olanzapine is “dirty” drug that oquppies many receptors in brain, muscarinic,histaminic, serotonin and others.
Risperdal only works on d2 and serotonin receptors… 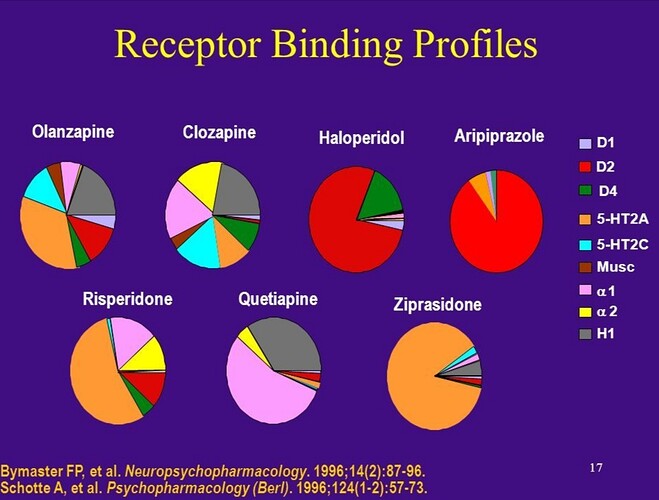 Of these only histaminic is off target. Muscarinic, serotoningic, dopaminergic and adrenergic are all clinically indicated receptors.

Olanzapine is a dirty drug but somewhat unintuitivly that could be the reason why it is quite effective.

histaminic antagonism helps when you have insomnia which is very common in schizophrenia. it shall induce deep sleep but unfortunately it cames with weight gain as a side effect

what is the therupatic benefits of muscarinic receptor? i searched and didnt find anything. any idea?

It kind of goes without saying drugs will have different therapeutic effects. That said I’m not familiar with this body of research. Muscarinic receptors are active areas of investigation. KarXT being the most obvious investigatory drug.

The point only being that I know muscarinic receptors are implicated. Not that they are the same as antipsychotics, I know clozapine has actions at muscarinic sites but you could probably tell me more about this having read the paper then I would know on the subject.

I imagine there will be a lot more literature coming forth on this if KarXT passes phase 3. My main interest is in repurposed FDA arroved drugs, nutraceuticals and adjective therapies. A lot of the neurobiology still escapes me and investigational pharmacotherapies aren’t a big interest of mine.

If you are interested in the implications of other neurotransmitters then maybe read up on the glutamate hypothesis of schizophrenia and neuroinflammation that seems like it is promising body of knowledge.

according to above research its said that olanzapine and clozapine have muscarinic M2 antagonism action but there is another research conflict with the above one regarding clozapine effect. but KraXT is muscarinic M1/M4 agonist.
bain chemical and the effect of drugs on these chemicals is extremely complicated and in some cases there is conflicting researches . i have read a little bit about glutamate hypothesis of schizophrenia specially the hypofunction of NMDA receptor found in schizophrenic patients

Where there is conflicting research each article helps develop a more full knowledge of how each receptor, molecule and drug works. I wouldn’t necessarily think of drugs with opposing action at specifc receptor sites as conflicting, just that under x set of circumstances a particular drugs does x and under another set of circumstances a different drugs has a different action. Where there is conflicting evidence we don’t have answers to these questions, but when you have a really developed understanding you can piece together these bits of knowledge to develop a framework of thought about how the receptors are working. This is beyond my level of understanding but I know this kind of knowledge space exists and I had the opportunity to speak to a professor one time who was running a research trial I was in. Some of the concepts and ways in which she spoke of the implementation of different drugs for different sub-classifications of schizophrenia disgnoses clearly indicated to me that you can develop this kind of understanding when you work with the body of literature enough.

But it’s pretty bleeding edge to make any useful inferences from it all.

do you know the therupatic effect of alpha1/2 adrenergic receptor antagonism found in certain antipsychotics?

I tried to avoid Olanzapine but it is always a personal expierence around these drugs. Olanzapine worked better than other drugs for me. I did not have hunger like stated by others.

I’m hoping for the newer meds to work better.

From personal experience, I had allergic/EPS reaction to Abilify. According to the chart, Haldol also works on D2 receptors. Therefore, Haldol logically could cause EPS reactions.