Inflatable Furniture Or No Furniture

Would you buy a bubble smoke black inflatable couch for $50.00? OR

I would buy the couch. That is me. At the least I would have a piece of furniture.

As a smoker I would not buy the inflatable couch…but that’s just me. Totally killed an inflatable chair once with a cigarette burn…

I would buy it. It is better than having nothing.

@BakedBeans I would buy the inflatable couch - its better than nothing. But you might be able to buy a regular couch, one that costs $50 or so - I would look around some more

I would check out thrift stores. You should be able to get a couch for $50.00

I don’t know, you might be able to find a nice regular couch for a little more on Craigslist. Do you ever have visitors? If it’s just you most of the time then why not find just a passable, nice upholstered chair? I might buy the bubble couch. I would have to see it first. It might be cool for a temporary couch. $50.00 is a good price. And yes, it might be better than having no furniture.When I was growing up and living in apartments, we often couldn’t afford couches so my parents would put single beds in the living broom instead of a couch. It was way cheaper. But it was cool back then because it was the seventies and it was kind of a hippie thing. For bookshelves we used cinder blocks and particle boards, all the way up until I moved out when I was 18. I know it was a hippie thing because when we move up to the Bay Area from Los Angelas in1969 when I was 8, we stayed with some hippie friends in an apartment near Market street. It was the heart of San Francisco and the city was overflowing with hippies, just a year past The Summer of Love. My parents smoked pot with our friends lol. But their house had the cinder blocks and particle boards.And posters and black lights.It was a very interesting setting.

Once I moved into an apartment on the fourth floor that had no elevator in the building. I couldn’t be bothered lugging a bed up those stairs so I ended up sleeping on the floor for almost a full year. I should have bought an inflatable mattress.

Maybe decorate your living space with big pillows to sit on or lay on. Or a beanbag chair. Furniture is outrageously expensive.

Lol. Hmm. Dragging a bed upstairs which would take an hour and a half vs. sleeping on the floor for a year. We have very similar decision making processes, lol.

Funny thing, my sister bought me two chairs for that apartment. We carried them all the way up but, due to the really lousy design on the entrance, we couldn’t get them into the apartment. We had to take them back down.

Here is the inflatable sofa.

Well, that sucked. Did you try taking the door off the hinges and the moldings off the doorjamb in the hope that the chairs would fit better?

Looks nice but whatever you do don’t buy at Rakuten, they have a horrible reputation for fraudulent charges on credit cards. I read slickdeals often and there are a bunch of horror stories there about them.

Hey BakedBeans, that actually doesn’t look half bad. I would put that in my apartment.

The problem was that immediately beyond the door was a narrow hallway almost the exact width of the doorway. There was just no way to even angle the chairs through because of the walls of the hall.

Any other sites similar to DealXtreme or Rakuten?

Here’s the same bed at Amazon for a few bucks more. The security of Amazon is worth six bucks in my opinion. 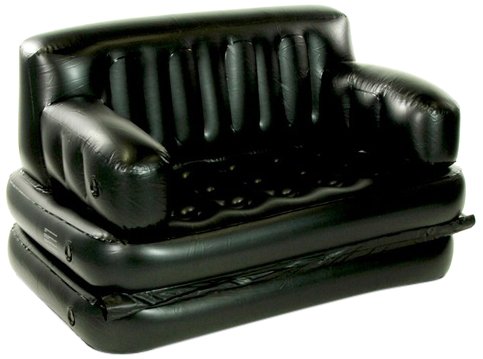 If you are looking for more than "just an air bed", then the Smart Air Beds 5 x 1 Inflatable Sofa Bed is probably the right piece of inflatable furniture for you. Depending on the chambers you inflate ...

Yeah, I checked that out too. It was a tiny bit confusing.Amazon said it cost $66.00. BUT it also listed a price of $59.00. in small writing. But yeah, that’s only six bucks difference.