I hate you, don't leave me

If my life had a book, this would be it’s title.

I hate people who hurt me and I crave for them to stay with me.
I left my boyfriend and now I ■■■■■■■ feel him everywhere. I have dreams, I shake when I hear the sound of message. I deleted his pictures and got them back.

You were not here for sometime and I thought you had some personal trouble, especially with your boyfriend, how strange. Sorry about that.

There’s a line from a song that goes ‘You’ll be here, cos you’re all that I got’. Meaning more or less what you said, i.e. you can hate someone, but if they’re all that you have, then maybe you’ve no choice.

But it sounds like you have a choice now.

It is very hard. You can do this though.

Cant believe this song would be applicable anywhere. But listen to cj, ull make it through this. And coming from me (my word means a lot lol) ur cool and u can do some cool stuff so get on ur feet and worry about u.

That is because I talk about it all the time. Ironic, hilarious, and sad.

God I swear I got this cold just because that is the first time in my life I left somebody.

I mean I am scrolling through his photos and i cry, how pathetic, I just cannot go lower it would seem.

Faster you are over it, the better it is, the sun is shining. 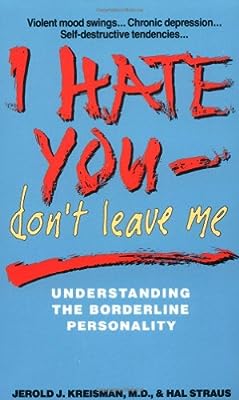 "AM I LOSING MY MIND?" People with Borderline Personality Disorderexperience such violent and frightening mood swingsthat they often fear for their sanity. They can beeuphoric one moment, despairing a ...

I can relate to the push/pull…confusion, love you hate you … that’s a tough spot to be in…maybe self doubt is mixed in making it hard to feel comfortable with the decision. Idk, I hope you feel better soon.

Within tha Ironic Measure of Your Thread Title , e(Y)e Am Remynded of Thus Lyric … ,

" Some of them want to be abused " - Marilyn Manson

e(Y)e Actually Never Felt That Way , Except That There is a Fact That e(Y)e Became a Joke of Sorts and Didn’t Evn Realize That e(Y)e Was Whispered … ,

Just remember what he did to you. Why would you miss someone doing that to you? If I met him I would kick his ass.

I truly feel for you! Even your avatar hurts to see. Sadness is a completely understandable breakup emotion, although painful. But try to distract yourself away from obsessive thoughts should they confront you. You deserve to feel better, and you will, in time!

Yep, that’s the one.

Keep your head up @Sarad. You’ve overcome a whole lot just in the little time I’ve been here. You are a fighter.

I don’t know…I didn’t know it’s gonna be this hard.I didn’t know that my mind will fight against everything I thought it was right before.
I can’t be alone. I can’t watch my sister kissing and cuddling with her fiance, and they seem so happy, it just breaks my will…

I don’t want to be abused. But I’m willing to take it for the sake of security and, however fragile, sense of love.

fight the urge by dating someone else? anyone else would do at this point as long as they aren’t abusive???

I don’t know, I’m kind of depressed.
Would you volunteer?

Hey juke, what happened with you and Angie at the end?

I wish I could volunteer @Sarad you deserve a nice guy. Angie and me made up.