Here's a joke. Maybe you can add one

Why didn’t the Arab couple sleep together on their wedding night?
Two tents (too tense).

Makes me think of:

Did you hear about the fire in the circus? It was in tents!

it’s like Fred Flintstone used to say, those who live in stone houses shouldn’t throw glass.

two young broke guys were on their way into Gander Mountain

to steal a tent and live outside in the park

He said to them, “I know what your in tent is.”

you call it plagiarism I call it a dictionary that defines only two words, war and peace.

The brain bastards that always talk to my brain told me that I did stand up. They told me one of the things I said was
"I would just like to say to all the men I have slept with…‘Don’t feel special’"

A guy goes into a psychiatrists office.
He says, “Doc you got to help me. Sometime I wake up in the morning and I think I’m a wigwam and some days I wake up and I think I’m a teepee”.
The doctor replies, " Don’t worry about it, you’re just two tents".

Not a joke, but a groaner…

Horse walks into a bar, and the bartender says,
“why the long face?”

lol pans made a good one

What do you call the border of finland? The finnish line.

A man walks into a psychiatrists office. The doctor says, " I need a little background on your family to see how you guys relate".
The man says, “Well my mom is normal, my dad is fairly normal but my brother is deluded and thinks he’s a chicken”.
The doc says in surprise, “Wow, that’s highly unusual. Why isn’t your brother here with you trying to get help so we can cure him”?
The man says, “Well yes I would do that but my family needs the eggs.”

Another man walks into a psychiatrists office wearing only shrink wrap.
The psychiatrist says “I can clearly see your nuts.”

How do you make a tissue dance? Put a little boogie in it.

“See, there were these two guys in a lunatic asylum… And one night, one night they decide they don’t like living in an asylum any more. They decide they’re going to escape! So, like, they get up onto the roof, and there, just across this narrow gap, they see the rooftops of the town, stretching away in the moon light… stretching away to freedom. Now, the first guy, he jumps right across with no problem. But his friend, his friend did not dare make the leap. Y’see… Y’see, he’s afraid of falling. So then, the first guy has an idea… He says ‘Hey! I have my flashlight with me! I’ll shine it across the gap between the buildings. You can walk along the beam and join me!’ B-but the second guy just shakes his head. He suh-says… He says ‘Wh-what do you think I am? Crazy? You’d turn it off when I was half way across!’”
―Joker’s joke 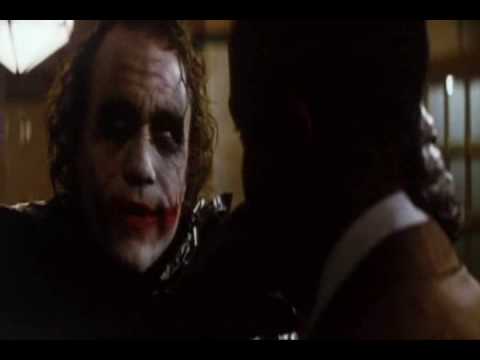 what I want to know about the toll bridge is, is there a discount available for people who already pay for Nestle toll House cookies? many times I’ll eat cookies while driving and I don’t think I should be charged for tolls twice.

even the name for schizophrenia itself is delusional, there is no t in schizophrenia but everyone pronounces it like skitzo frenia

did you ever notice that every joke references or mentions atleast one body part? sometimes it’s a dumb brain, a delusional brain, a whole person or a whole country of people. it doesn’t have to be a human body part either a dog chasing it’s own tail is funny.

His next patient is a Pekinese dog and the psychiatrists says, “Why the short face”?