Your Brain on Schizophrenia! 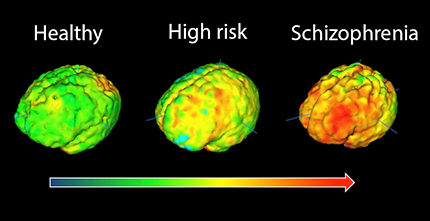 The article shows two brain scans, both identical and is labeled ‘The difference between an Schizophrenic Brain and a healthy Brain.’

The article goes on to explain that Schizophrenia is easily cured by simply not allowing people to smoke marijuana, and that the ‘majority of people who claim schizophrenia are also massive supporters of the Gay Mafia’

Its a gay bashing, mental illness denying article that thoroughly pissed me off, and to top it off this person ends his email with “Happy Birthday ■■■■■■■”

So I sent him, in the form of 36 emails, EVERY SINGLE ARTICLE I could find that shows the differences in the brains of those with Schizophrenia, those who are healthy, and those who are smoking pot.

the reason it took 36 emails? Yahoo only allows a few thousand characters per email…and some of those web addresses were VERY long…in total I think I sent him around 700 links…he should consider himself COUNTER-TROLLED…

Isn’t it hilarious when people with personality disorders try to troll you for YOUR mental health problems?

I was on the hate wagon for a bit when I was young, although I never really felt “hate” for anyone, it was more like trying to find an outlet for all of my anger and projection problems.

But yeah that said it’s still hilarious, I laugh at my younger self to this day.

when I joined the local Aryan Brotherhood, after they told me they just wanted to ensure white people didn’t get plowed under by ‘special rights’ for minorities, which was a big deal for me, because my state had just passed a law that prevented schools from expelling black students even if they violated rules that require immediate expulsion (the law was removed just 6 weeks later), my gramps took me into the back bedroom and promptly beat my ass with wooden spoon…i was 16 at the time…he then explained to me what the Aryan Brotherhood was called just four years before…the American Nazi Party…

so I learned pretty quick that hate is easy to fal into, sometimes you have the best intentions but the wrong method…but I also learned that same week that hate is for the weak minded…

I hear ya. I grew up in an extremely hateful and bigoted family environment, mostly due to my father and one set of grandparents. Once my parents divorced and we moved, and I was able to get away from all that and experience real life, I was finally able to just discover myself and let go of all that BS.

Hate groups tend to prey on people who feel outcast and downtrodden. With the racism where I grew up in Indiana, there was a strong message of, “We are your family,” so it was especially attractive to people who came from bad home lives. Pretty sick, really. Glad we both got away from it.

yeah this group ended up shut down, but this ex friend that emailed me is part of the “National Conservative Party” which is worse than Tea Party…they believe all mental illness is a ‘liberal plot’ to undermine the American economy…

I think the problem with that sort of thing is that there is corruption, but it’s not black and white. There are people in the psychiatry field who actually want to help. There are pharma companies who are trying very hard to make great meds. There are people with mental illness who do need help. Any all/nothing perspective is going to be lopsided.

that’s my view, I know of several people who have used mental illness as an excuse to not work, including my best friends former CO in the Marine Corp, who served a singl active duty tour in Afghanistan, never once heard gunfire outside of target practice, and now has a full disability for PTSD, whereas my friend served 20 years including 6 tours in the middle east, has been caught in an explosion twice, and yet was denied Disability because his experiences were not ‘Severe’ enough.

Heres a good question, how is it a politician who never saw combat, and only went on a single trip to the combat zone ( a certain Army General who went to ‘assure the troops’) gets PTSD exemption because of that one trip? And yet my friend who was forced to shoot a little girl because she had a grenade in her hand, cant? That kills him, he has nightmares about her, about her reach towards him and crying…

To be honest, to think of how he has supported me, with my petty crap, despite that? I admire him to such a high degree it hurts, so I get angry for him…really, he should be with a support group, instead hes always running to help me…crap…now I feel bad…

It sounds like you have a friend with exceptional psychological resilience. That’s very cool, you don’t deserve to feel bad, just grateful.

He is a Marine, they only come in two types, Tough, and Tougher!

my inlaws are the type that believe mental illness is just an excuse to not work. I know that because whenever they mention me not working they give me a look like, “well say something that makes you worthy of our daughter”

You can tell that it’s a case of misdirected frustration when people constantly flip-flop between blaming Big Pharma for not being able to cure mental illness, and blaming mentally ill people for making stuff up. Which is it, folks? They don’t know. They’re just angry but can’t identify an enemy. Happens with a lot of things in life.

my in laws believe that pills can cure mental illness just like an antibiotic cures infections.

I feel for you @cbbrown, my GFs grandmother gives me that look every time she sees me…her parents are cool though, her mom is a Shrink (self described) and her dad is a Sociopathic Specialist (not sure what that means beyond, he studies the effects of sociopathy on the human mind)

And @Turnip that makes sense actually, ive heard the argument before lol, from the same Ex friend who sent this who said “The only reason Pharma doesn’t cure mental illness is because there is more profit in treating it.” three sentences later “And that’s why its all made up by you lazy freaks”