Why is Clozapine the most effective AP yet it blocks the least dopamine? 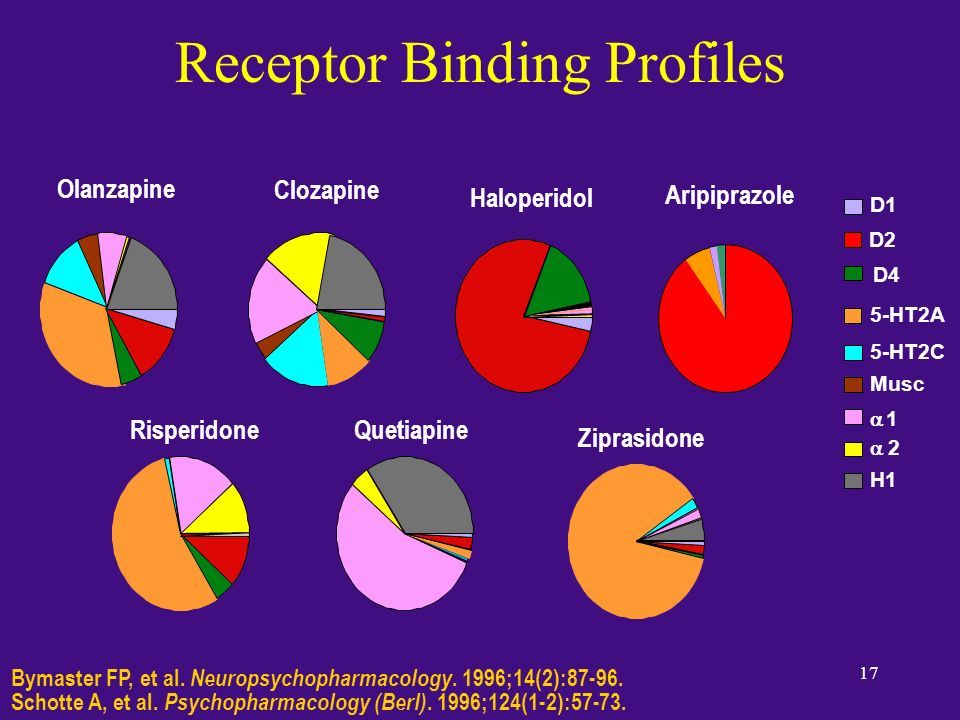 It’s because of the Caramilk secret.

IDK. But I don’t think I’d go by your top image of the pie charts. It kind of distorts the data. For example, It makes it look like Risperidone is a weak D2 receptor blocker(with such a tiny slice of the pie red) when in fact it is given 3 +++ in the diagram below. I don’t think the data translates well into pie charts. Just because it is a heavy 5HT2A blocker doesn’t make it a weak D2 blocker.

Just my opinion. I think you are better off with the lower diagram.

As for your main question…I don’t really have an answer. Sounds like a question for someone with really advanced knowledge of antipsychotics.

I think part of clozapine’s working is that it sedated heavily. People sleep more, feel tired, get less anxious, are more numb. I think that’s an important part besides the dopamine and serotonin impact.

I heard antidepressants can elicit reversal of the hippocampus region also.

I was on on 40mg of olanzapine witch is a high dose of a powerful antipsychotic that affects more receptors (17) than any other antipsychotic (to my knowledge), then I switched to 60mg of Lurasidone which is a low dose of a weaker antipsychotic, and yet I am doing way better.

I wonder what Iloperidone is, I think its Fanapt but never seen someone on it here.

Its weird but 80mg Latuda was better than 15mg Olanzapine for positive symptoms. I was still almost fully psychotic on 15mg Olanzapine. Dr suggested to try it at doses higher than 20mg but I refused.

@Aziz, you are going in circles for some time from l dopa, clozapine etc.
Question is what you see as your main problem.
You have to make a change, but in what way?
Clozapine is veryyy sedating…
From my expirience risperdal is just asking for more, and gain weight…

I don’t mind the weight gain, I want something better for negative and cognituve symptoms. Ldopa helps but makes posituves worse. Clozapine blocks less dopamine than risperidone so its better my Dr told me.

After what I was told Clozapine mainly works for psychosis by blocking D4 receptors. And that it will improve some cognitive aspects and worsen others. And that only works on secondary negative symptoms likewise all antipsychotics ever invented.