I was talking to a friend earlier and they said something that kind of sent me spiraling and not being sure what’s real and what’s not. I’m still kind of ■■■■■■ up about it and I’m not sure what to do.

I think I have an appointment with my pdoc on Friday. Or maybe that’s my therapist? I don’t actually know. I’m not even really sure that phonecall really happened? I can’t seem to find the record of it, but maybe I’m remembering it wrong?

Everything seems to be confusing me lately.

Try to distract yourself.

Watch a favorite show or movie or something.

When I feel that bad distractions are the only thing that works.

When you’re struggling to know what’s real and what’s not, how do you keep from making it worse?

Stop thinking about it.

Seriously, that’s why you have to distract yourself.

The more you think about the further into the abyss you’ll get.

I think you’re right. This specific feeling is new to me. Usually I’m either pretty far gone or not enough to need this confused. But like, I cant tell. Everything is wobbly

If I’m unsure about things,

I’ve seen it a million times, I think it’s funny and it’s 100% predictable.

Get a movie or show like that and just hunker down.

Try to shut your brain off.

Talked to my partner last night and they said I’ve been struggling for a week or more, which I guess I didn’t really realize. Not that that’s surprising, but I’m a bit more concerned I guess.

I just want to go back to sleep and not exist for awhile.

I’m sorry your partner is also having issues.

It’s difficult to support each other when you’re both feeling so down.

They’re not. I worded that weird. They were saying my issues didn’t start yesterday, I’ve been out if it for a week or so.

No, I reread it and misunderstood the first time around.

I see what you’re saying.

You’ve been feeling weird for a week or so and they’ve noticed.

Are you getting enough rest?

I don’t know. Maybe not. I’ve been pushing myself pretty hard to keep up with little LED and keep her happy. It’s causing a lot of pain, service what’s kind of ■■■■■ me up mentally

I don’t know kids ages and milestones and such,

But little LED is growing up.

Does she need you all the time now?

It’s great that you guys are bonding like this and spending so much time together,

But taking a step back for your own health is important.

You can’t take care of anyone if you lose your ■■■■ and end up in the hospital.

I know you have physical pain, which ■■■■■ with you mentally as well.

All those things are not easy.

Is little LED in school or did you decide to homeschool?

She starts first grade tomorrow. She doesn’t need me all the time, but she’s very needy and anxious. We’re pretty certain she’s autistic (since both her parents are), but that eval isn’t for another month or two. Not that it’ll really change anything. But yeah. Once she goes back to school I’ll be able to just rest and not exist for almost 8 hours a day.

I can’t believe little LED is almost in first grade.

Anyway, are there day programs you can put her in until you’re feeling better.

I know some libraries and stuff have little programs where you can drop kids for a few hours.

Most of it is free.

May give you a break until school starts.

Unfortunately I’m pretty rural so there aren’t any programs like that except at churches and hard ■■■■■■■ pass on sending her to be brainwashed.

Yeah, I wouldn’t send her to a church either.

It sounds like you’re just going to have to let little LED figure how to entertain herself a little,

Which I feel sure she already knows how to do,

And allow yourself a break.

She can handle it.

It’s okay to let her have a day or so of TV and screen time.

School is about to start and you need a break.

Sleep in it every night. 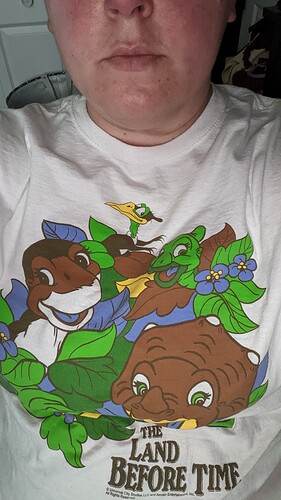