Pharmacogenetic test for the best ap

Has anyone here ever done? I did and i’m looking forward to the result

My personal opinion about meds is that it’s just trial and error. Personally I don’t put much faith in genetic testing for meds

How does pharmacogenetics testing work? For antipsychotics

Hm… but have you done any tests of this? I look forward to knowing the result of my.

I haven’t done it, but I plan to if I ever need to switch.

My psychiatrist collected a saliva sample from me that was sent to the lab. There they will take the test to see which medicine best suits my genotype.

I haven’t been tested, but Geodon and Seroquel have kept me sane for a decade and a half without the mental agony of the typicals. By the way, welcome to our community! We’re glad to have you.

But I wonder once they have the saliva what is it they do precisely to know what ap works for you best. Its a bit of a mystery to me

Welcome to the forum

that’s really cool you got the test done @Genius. I think genes play a huge role in response to medication because every individual is so different. For example, my ap Lurasidone is supposed to make you sleepy but I’m unable to sleep on it & very awake with rage/psychotic symptoms…so that’s disappointing.

Was the test expensive, when do you get your results?

I had this done as I have literally been on all antipsychotics and am either allergic, or got no relief. All the apps it said should work best for me, I am allergic to. Everything else I had been in double the highest doses to try and get something to work.

Currently only on xanax, been off appt since Aug 1. No change as I said nothing helped me before, even hospital would release me saying there was nothing to do so why keep me inpatient.

Also antidepressants don’t work on me.

Hoping to get into a drug trial once I get my RSD under control again, but that’s gonna take a year or more.

I honestly think the test was a waste of money unless your insurance will pay for it. I’m glad Medicare paid in full, cause 900 bucks for a cheek swabs is ludicrous.

Have you tried any of the supplements for schizophrenia or are there allergy issues there? I’m trialling several & they seem helpful, subtle but helpful.

I did it a couple years ago. It seemed like my gene-drug interactions just required me to take higher doses of those drugs, especially if I was a smoker. I think it was useful info to have. 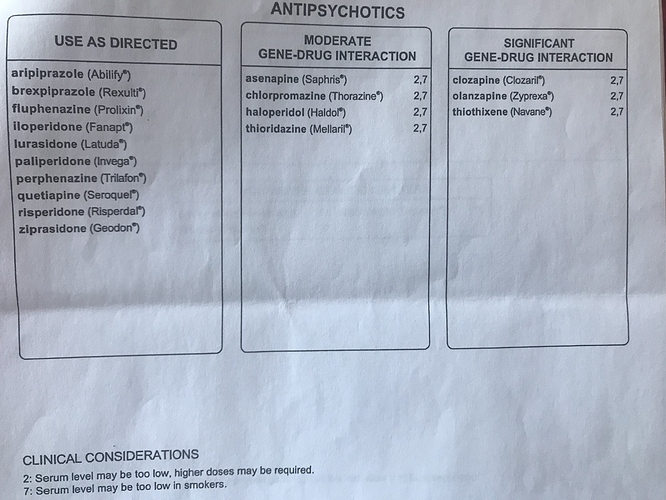 Edit: Looking over my other results, I did get a warning for “reduced efficacy” for Paxil, which I was on for years and thought worked just fine. So I guess your mileage may vary. It might be a helpful starting point, but like @everhopeful suggested, it really comes down to trial and error.

I’ve not tried the supplements as they were not recommended by the new pdoc. My old pdoc had me trying CBD oil, but I tried the 3mg as that’s what I could barely afford, and she laughed and said “for your crazy you need at least 1500mg” I was insulted by her and she knew I couldn’t afford that. She was a real ■■■■■, had no reason for her comments ever, she belittled me every chance she got.

As for RSD it’s Reflex Sympathetic Dystrophy, or Chronic Regional Pain Syndrome type 1 as it’s been updated I found out from my husband doing some late night research at work. A lot of people end up with pain pumps, but they don’t like to do that until you’re in your 40’s or 50’s, and I’m 34. I was diagnosed with it in 1996, when I was 11. I was diagnosed SZ at age 10 after I went under general anesthesia for double Achilles tendon surgery, woke up and there were violent voices and delusions, they said normal reaction, but it never went away and only got worse. But my mom wasn’t officially given my diagnosis of sz, they said it was just mental issues after I tried to kill myself so many times. Never ended up in a psych ward until I had post partum psychosis after Kiefer in 2005, he was 6 months old, Kalick was 23 months old, I called my husband at work and said I need you home, I think I’m gonna kill myself and that psych ward made me 1000x worse, it’s a mess explaining st luke’s south shore in milwaukee, but we got them in major trouble for ■■■■ they did to me.

I go for my hip MRI tomorrow, they told me take 2mg of xanax before checking in, so hoping I sleep thru it. Not really claustrophobic, but pain makes me unable to stay still, so it’s sleep or they IV knock me out, and I don’t trust Mercy to do an IV after causing this with an injection in my hip.

I hope I get okayed for this drug trial soon, things have been very rough, and now Kalick is starting to show symptoms of psychosis, he has voices, but he said he’s dealing and we got him back into his therapist, she makes him take the entire day off of school after their appts, school isn’t happy but he does have an IEP and medical thing on file. So i dare them to try and ■■■■ with us like th er y did last year. I may be on a cane, but doesn’t mean i won’t get into it with a righteous ■■■■■ at the school that already doesn’t like my kid because he stood up against her for saying his now ex-girlfriend’s panic disorder was a cry for sympathy.