Painting My Way Through Mental Illness

I know I’ve put these artworks on here before but I just wanted to explain a little bit about how they come about. In 2002/2003 I was abusing alcohol and street drugs mainly marijihana, XTC, speed & LSD in the beginning I enjoyed these experiences until after a few bad experiences I began to withdraw into myself and I became deeply paranoid and suspicious and I also lost the ability to comunicatate and physically I had slowed down that everything was kinda in slow mo. So I got away from the drug scene and I slowly began to recover but only about 30% I began seeing a private psychiatrist paid for by my parents I liked him but I began to deteriorate this caused me to attempt suicide twice during this period anyway to cut a long story shorter in 2005 I was diagnosed as Drug induced psychosis to which in 2007 was changed to Paranoid Schizophrenia I was put on Risperdal but had severe social Anxiety and thought people were reading my mind and still felt robotic and I was in and out of psych wards and psych rehabs and it wasn’t until 2010 that they switched me to an injection called Flupentixol every 2 weeks within 6 months I started feeling calmer inside my head but with more energy to which kinda gave me an obsession with using this energy so I started writing poetry and drawing A4 scale it really fascinated me so I kept it up and I really found it enjoyable & uplifting. Anyway I by no means cured but there is hope for recovery and enjoying life. 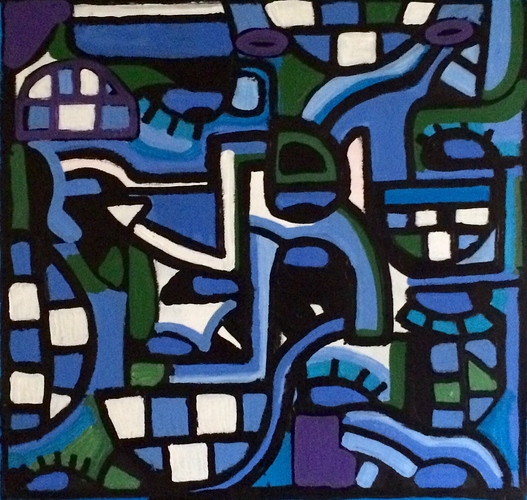 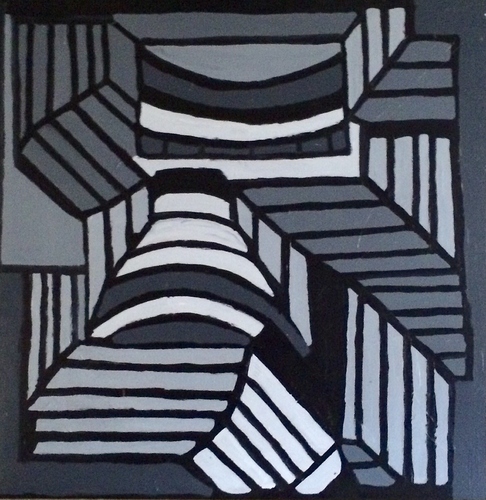 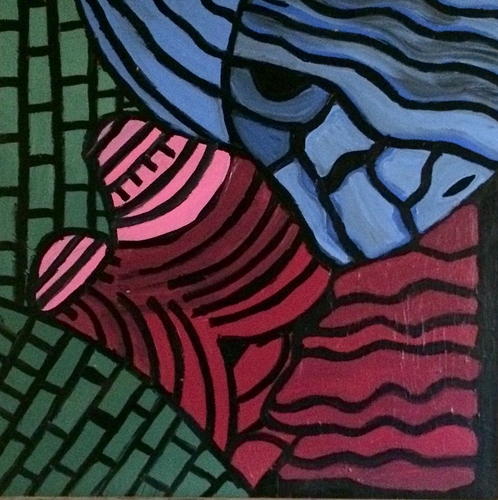 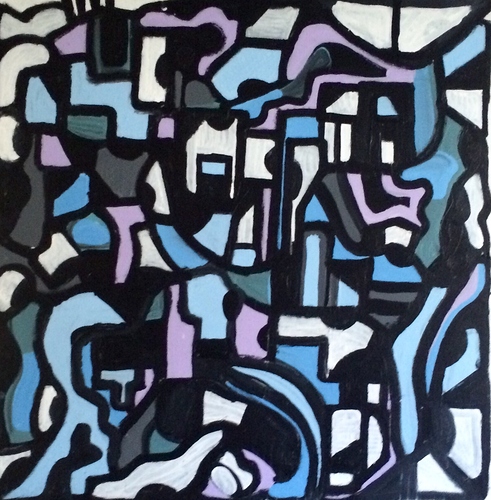 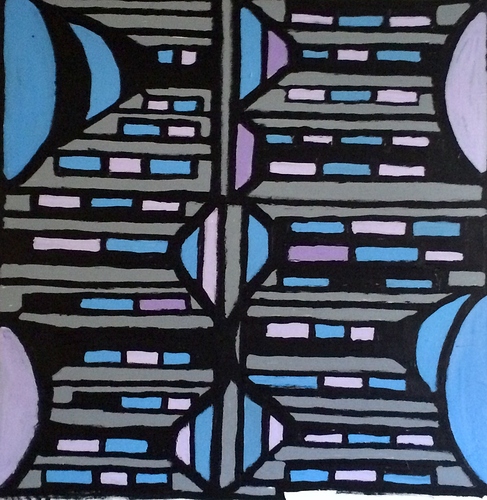 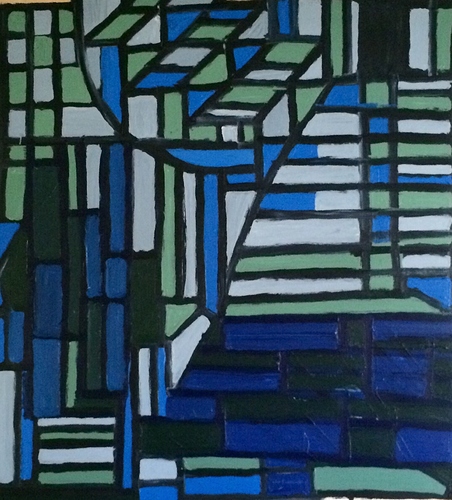 Thanks for sharing. Inspiring!

Thanks! I don’t paint every day but about 3 or 4 times a fortnight when I’ve got spare money which is rare with the cost of living lol

In your area you can look into galleries, shops and other creative centers that might let you give classes, might be popular in the summer,

and then you can get some money for paints and materials. Also see if colleges, and schools could give you used paints for free if you put up your works in a display case for say a month.

Don’t ever let money stop you. Ever.

You are very talented! Great stuff!

Very good! I noticed that you use a lot of heavy black borders in your work. I wonder if that could be because of depression.

I like them. There’d have to be some lighter colours if I was ever going to display one in my living room though.

Thanks for all the suggestions and likes people. Honestly I think anyone with an imangination and some sort of interest in art and it’s very theraputic could do it just as good and better honestly. In high school I was so dysfunction they couldn’t even get me draw a stick figure let alone create interesting “Possibly” art I think a lot of people with mental health problems should be incouraged in art “Self Expression” or music I was never keen on being “work in the office kinda guy” or shovel ■■■■ for some ■■■■■■■. I love it and I’d encourage u all to give it go. 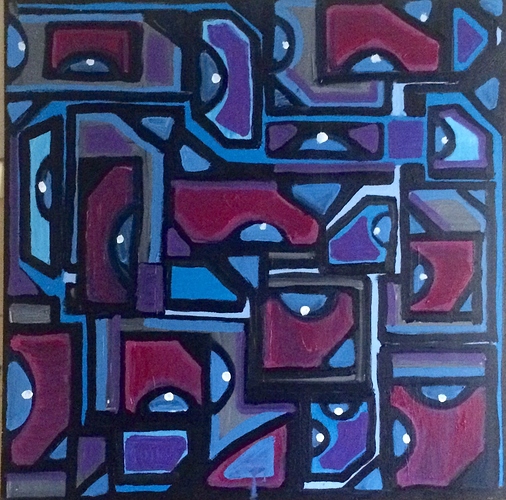 holy ■■■■ those are aweome! If I was filthy rich and into art, I’d buy the lot of you without blinking! Maybe even make you my personal painter.

The second one is brilliant, really.

I love your art work! I agree that being creative is a good way to eal with mental illness.

I wonder if you could turn these designs into kind of glass paintings. You know like one sees in big churches. Then maybe you could make a few bucks to continue your creativity. Just a thought.

I’m not a musician but I love music as an outlet. Love to dance too.

I’d love to see more of your are in the future. Keep us up to date please.

Oh and thanks for sharing your story too, Totally inspiring!

Fantastic! I love the colors and patterns. My son is/was an artist but the meds (I’m told) that keep him stable have taken away his desire to draw or play his guitar. He hasn’t drawn in over 2 years. Congratulations on your artwork–it’s truly beautiful. Thank you for sharing.

My son is/was an artist but the meds

i was a very accomplished artist - Have hardly drawn/painted for the past 17 years since being dependent on the medication. It does destroy creativity.

that is really good,

but after seeing your work i think differently, you make good use of that brush

They are great! Thanks for sharing.
My pdoc told me that shiczoprenia has similar symptoms same as people who suffer from drug abuse. I mean if you abuse durgs you will have symptoms that is similar to schiczoprenia. I used to enjoy smoking grass and painting. But yours seems to be a different story. It good that you have some means to express yourself in a way that satisfies you. Best of luck. I hope you will continue to draw all through your life. Unfortunately I stopped doing them after joining my family home. I am living in a small room in our flat so no chance to get involved with the oil painting. I have become very lazy too. Even the tiniest chore seems to be difficult to do. But on the good side I have to say that I am doing quite good when translating books from English to Turkish. Thats how ı am earning my life. But I am not earning enough to move in to my own place.

Sorry to hear that you stopped painting. I found it very interesting that you think medication kills creativity. The reason may be that it takes away sexual energy or libido which, as far as I know, is the most fundemantal/major energy we have. I also want my energy for life back but my mother is putting pressure on me not to quit medication. I am using a drug called Rexapin. I am suffering from drug induced psycosis. I used to smoke grass years ago and it worked bad for me. I lost my wife 18 years ago but yet I continued living my life. I got married again but it did not work. Nowadays I lost all the interest for the opposite sex.

I also want my energy for life back but my mother is putting pressure on me not to quit medication. I am using a drug called Rexapin. I am suffering from drug induced psycosis. I used to smoke grass years ago and it worked bad for me. I lost my wife 18 years ago but yet I continued living my life. I got married again but it did not work. Nowadays I lost all the interest for the opposite sex.

Hi, am sorry to hear of your troubles. My original diagnosis was drug induced psychosis, when i was aged 17, i landed in psychiatric hospital for 6 months, & was very heavily medicated. Age 25 i was diagnosed with paranoid schizophrenia. i took a lot of drugs & did a lot of drinking in the past - have now been clean/sober for close to 14 years (despite a small number of slips).

i had three 1 year relationships in the past, but they were more about sex than anything else. Have been single now for 16 years, & out of work for 14 years. i slept with a friend once around 6 years ago, but that has been the only sex. i’ve largely lost interest in sexual relationships with women as well, although i do have some good female friends. Maybe if my soul partner turned up? But she hasn’t.

The cannabis was my main drug as well, i found it very addictive.

A part of me hates being on this medication, but what are the real options? i suppose it’s better than being in florid psychosis. One of my main interests over the past year has been in experimenting with Radionics/Rife equipment. i also read & collect a lot of books, & have done a lot of research into certain areas.