Marijuana messed up even more

i smoked yersterday 5 times in a day and today once, after the effects, or even during. i just go even more psychotic than i already was plus when the duration was done i felt so dark and depressed inside its like your own soul had been removed from your body, it’s like you can feel very deep inside of your chest is it spirits? I know it’s not fun and a not a good idea to smoke when you are diagnosed but i just really wanted the voices to go away i thought it would helped, i was so much better before smoking and now everything is worse. it’s hard to explain . it’s like i was rejected from my own body and feel empty… i hope it only lasts till tomorrow and ill be fine again because i am not right now. I take sertraline 100mg and geodon 60mg for over 5 months now and sertraline helped at the beginning but now it doesn’t even help at all , whatsoever i am scared of stopping it because of the withdrawl effects and i do not think geodon is helping. i remember when i was taking zyprexa my mind was much more clearer but it was pretty heavy. i hope i find a better med. my pdoc is just very stupid and all he do is prescribe one medication at each visit so i can’t get 2 meds in one day. it’s just stupid. what medicines/antipsychotic should i ask him to get this monday in my next visit? he usually prescribes me what i tell him i heard of taking and so he prescribes what i say it could help, like i thought sertraline would help but its not a big help anymore. is seroquel good? i heard of it but it is also quite heavy. well anyways i shouldn’t have smoked i am so STUPID. i really hope it goes away by tomorrow. i am this way since yesterday…

I hope you feel better soon. I don’t know what medicine to recommend. The only two medicines I’ve ever taken is Abilify and Geodon. Geodon is by far the best that has worked for me. Abilify was good too but it gave me crazy leg shakes. It was like energy was shooting down my legs and I would have to jerk them around. Oh I did try Saphris…Its a lozenge. I didn’t like that. It might be a good medicine tho. I really don’t know. Anyways, I hope you feel better soon and find a medicine that works for you.

Well 5 times in one day will seriously screw ANYONE UP… ARE YOU KINDA “SPECIAL”?.. SO YOU DON’T KNOW RIGHT FROM WRONG?.. I ASK BECAUSE I AM KINDA SPECIAL AND SMOKED WEED LIKE A FOOL.

Weed is no good for psychotic disorders.

I’d ignore all the ■■■■ you thought you felt and just focus on what you’re meant to perceive.

I didn’t read your whole post in its entirety.

Your on synthetic meds AND trying to get high on weed?

Yep at that amount of cannabis consumption along with the synthetic meds… What can you do.

Temptation is hard to resist. Please be kind to yourself. Many of us have made this mistake…

Getting on meds… not feeling quiet like we remember… and with one bad idea… the sneaky brained thinking comes in we sometimes reach for the weed.

I’ve done it. It was quite a while ago. It was summer in 2013. I was on the road to getting better, I was being med compliant, had been clean and sober nearly 4 years and then for some dumb reason I smoked some… not much… I was sure just little wouldn’t hurt… just a little would be OK.

It wasn’t Ok at all. It caused some pretty heavy delusions to take root.

It took a long time getting my head unscrambled. Upset my family again… all that work getting clean and sober… It was so stupid.

I got it kicked out of my life pretty quickly that last time around. I know now… once and for all… my high times are over.

its like your own soul had been removed from your body, it’s like you can feel very deep inside of your chest is it spirits?

If you feel like your leaving your body and something else is keeping it moving… and if you feel disconnected and empty from your own body… that does happen to me.

I’ve since learned about depersonalization… that is just me. Not everyone. but it was an idea that described what I was feeling. 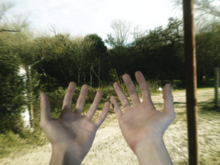 Depersonalization can consist of a detachment within the self, regarding one's mind or body, or being a detached observer of oneself. Subjects feel they have changed and that the world has become vague, dreamlike, less real, lacking in significance or being outside reality while looking in. It can be described as feeling like one is on “autopilot” and that the person’s sense of individuality or selfhood has been hindered or suppressed.[not verified in body] Chronic depersonalization refers to d...

I’m rooting for you.

Well, obviously you should not smoke it again. I’m pretty sure you’ll get the same results and maybe even worse. Next time you feel like you’re going to smoke pot again just ask yourself: Was it worth it the last time?
Many people with schizophrenia cannot handle marijuana.

I hope you start feeling better soon. I learned my lesson about weed in college. My girlfriend and I wanted to try it and be cool. I had a very good friend who was extremely into weed. We went to his one room apartment. He was older than us; about 28 to our 21. He was studying nursing. I was majoring in psychology and my friend was majoring in nutrition. Anyway, we went to smoke the stuff at his place. This is when I really should have truly recognized that I more than a teenage identity/depression issue. My two friends smoke the weed and responded with the virtues of someone who had intense meditation and relaxation-I guess like some metaphysical yogi person. As for me, I started immediately hallucinating- big time!- I was picking oranges off some orange tree in his apartment! My friends thought it was way cool; but, they were way too relaxed-beyond sleep-even. As for me, I wouldn’t admit; but, I was in deep pain. It was not cool or funny to and for me. After that, I never touched weed again. My preferred drug was alcohol-which I quit abruptly after another very awful experience. I guess I am sensitive to this type of stuff. Don’t worry if you sort went “backwards” My good weed supplying friend also told me; “You must go two steps backward before you can go one step forward.” Actually, I have never forgotten that when working with my illness and symptoms. Please don’t forget that either. This may have been a backward day for you; but, tomorrow will be a forward day. I know that in my heart and spirit. Tomorrow will be a much better day for you.

Sadly for someone that is full BLOWN schizo before use

The come down is especially hard.

thank you so much

The first few years of smoking marihuana were fun for me. Then, things turned. Marihuana became paranoia inducing. Not fun at all!

I guess the last time I smoked marihuana was 1979.

When people pressure me to join them in smoking marihuana , I tell them, “I’m more fun to be with if I don’t smoke.” Well, that is certainly true!

Personally, I never enjoyed the high of marijuana that much, even though I did smoke a fair amount of it during my time. I can see how it might exacerbate a person’s symptoms. I’ve been on Geodon and Seroquel for over ten years now, and I’ve had no psychotic breaks. Those drugs do me fine. You might try a combination of the two. They control my symptoms with the fewest side effects. I hope you get to feelin’ better. Keep looking. You’ll find med’s that work for you.