This is old news. They are on phase 3b now and expecting results in the last quarter of 2016.

That release was from September 2015.

4th quarter of 2016, is already upon us. it was my understanding the the last phase 3 study would be ending late august so they should be collecting their data as we speak. Still i think the drug won’t hit the market till 2018 for some reason, they certainly don’t seem to be in a rush

They should fast track this one for real! It could save lives man… I don’t know what the holdup is…

I love talking about iti-007/lumateperone. Hopefully we can start a discussion here. I can’t wait to here the results for negative symptoms. Alogia is the only major symptom which holds me back functionally. If the 5ht2a antagonist properties can treat that I’m a perfectly healthy, happy, normal average person. Hopefully the results indicate a significant improvement in negative symptoms.

No weight gain, no motor side effects, no cardiovascular abnormalities hopefully doesn’t flatten out your affect too much and maybe just maybe no sexual side effects. This med sounds like a dream come true. It would be no different than say taking Prozac for depression. And we wouldn’t have to worry about diabetes or brain shrinkage.
I might just start coming out of the house again

I read that the drug increases social interaction amongst patients and also that it affects glutamate which is thought to be responsible for negative symptoms. It might not be a cure but it’s the best thing they got on the horizon for us right now.

I think its basically the same thing as min-101 with small d2 antagonism. Here let me post a picture I have on my phone which may be interesting to you: 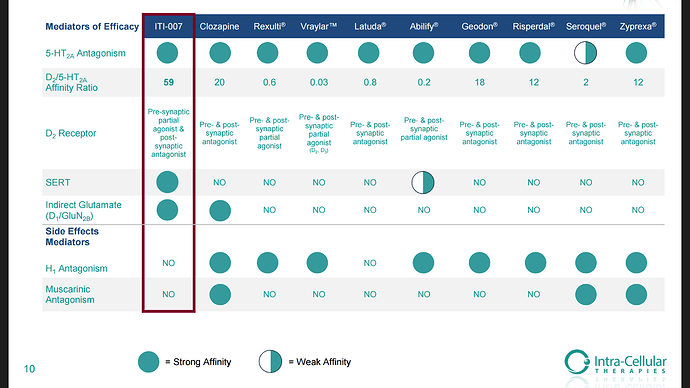 This is a comparison of 2nd gens and Iti-007. It has a completely unique effect on D2 receptor.

I just hope it’s good for negative symptoms. I read in a summary of a trial that it has a minor effect on negative symptoms, but clinical trials are different from reports from actual users. Once it’s out I will comb this forum for reports from users who are on it and come up with my own profile for its effects. If it is useless I won’t bother discussing it with my pdoc.

Don’t think I’ve seen that one, yea it looks like it has a minor effect on the D2 receptor with a 60 fold increase on the 5ht2a. I’m no scientist but I think The d2 receptor is responsible for typical side effects seen with the other drugs that we don’t need. Also the stronger the effect on the dopamine receptors the worse the effect on negative symptoms. I have negative symptoms from latuda that I don’t even have. If the drug just tickles the dopamine receptors it should lessen the negative side effects that other drugs that have a strong impact on the dopamine receptors. The pro-social aspect of the drug I think comes from the effect it has on glutamate be that direct or indirect. I read an encouraging article written by a dr Jeffery Lieberman of Columbia Psych, that said this medication would be a game changer.
Min-101 is a few more years away from the market but that’s another one I would be interested in. I hope we are witnessing a changing of the guard in so far as these atypicals go. But I get mad when I see they’re still making long acting versions of risperdal and ability

Have you ever tried Vraylar. It’s got some side effects but I noticed an improvement in my avolition and cognitive impairment right away

And the sad thing about those Lais is that many patients are actually willing to pay more money for the same drug, for example risperidone and invega. I think you’re right about the low d2 occupancy preventing side effects, I read that somewhere and atypicals with high d2 antagonism like risperidone have more side effects. I read that same article by Jeffery lieberman, it was written earlier in the development of the drug but I feel like the way he described it on paper sounded pretty positive. @cactustomato said iti-007 is supposed to have as much efficacy as saphris, if that is so some people might have to try polypharmacy with it.

I haven’t tried Vraylar but my pdoc suggested it. I’m on Rexulti which has a similar effect on dopamine and robust antidepressant efficacy. I feel like Rexulti has improved my motivation and cognition significantly, in fact things are so good on this and Seroquel that I’m considering staying with these meds for a long time. My only issue is a couple of negative symptoms: alogia, small emotional range, lack of interest and stereotypical thinking. Alogia is my most limiting negative symptom and it makes it difficult for me to have relationships.

I did not know that about Iti-007. (That it had the same effectiveness as saphris). I tried saphris and hated it. I hope it’s strong enough to be a stand alone therapy when it comes out because I would be able to kick the antidepressants to the curb then too. But I guess only time will tell. I did read that during one of the phases of development it didn’t reach its endpoint and they had to rework the study to make it effective. But let’s hope it works, they compared it to risperdal so that was gutsy they must have faith in its protective qualities. But I wonder what side effects it will have… It’s gotta have something right?
I know vraylar helped my cognition but it had some strange side effects for me so I just thought I would mention it. Haven’t tried rexulti but glad it works for you. I’m on latuda and its ok but I’m starting to get tired of it. Lot of quality of life problems on latuda but no where near as bad as some of the other ones

If you don’t mind my asking what side effects did you get from Vraylar? I’m guessing the typical partial agonist side effects of activation, akathisia and insomnia.

Those three partial agonists abilify, rexulti and vraylar should have similar side effects.They decrease dopamine where it is too much and do the opposite when there is little.

Latuda is also one of the more activating medications, maybe you wanna try something less activating? Just a suggestion.

I also wasn’t a huge fan of saphris but to be fair I was on it for less than a month so I couldn’t really form a legit opinion about it.

They have listed mild sedation as a side effect of Iti-007, I guess people will have to take it at bedtime.

I don’t mind at all. The vraylar I took for about two weeks. I had some eps on it but not much insomnia maybe some agitation. I was on 3 mg. the first day I though wow this med is the answer to my prayers. It started working instantly and I could think more clearly and fluidly(something I struggle with is not being able too) so the med was great. But after a couple days I started to feel slightly crazy on the med like uncomfortable in my skin. It did something to my affect that I didn’t like and my OCD kicked in. My guess is that it just had an entirely different mechanism of action from any of the other ones that I’ve tried and I got uncomfortable. Needless to say I landed on latuda which I was more familiar with. I never got a chance to see if vraylar caused weight gain or any other of the side effects, but it is a strong medication and I wouldn’t be suprised if it offers good symptom control.
Hope this helps

Eps is definitely a red flag when starting a new med, no one wants to live with those kinds of symptoms. Could you describe what the movements were like, was it movements, akathisia etc. As for the other side effects, maybe if you gave it some time they would go away? Two weeks isn’t long enough to come to a conclusion about an antipsychotic, thats why clinical trials last several weeks to a couple of months. Have you considered that the crazy feeling might have been from being on too low a dose? I personally can only manage on
slightly higher doses of meds, but that’s just me.

The eps was like muscle tics and restless leg. It wasn’t terrible but I tried the drug hoping it would be different than geodon which is what I was taking in the past. You pretty much nailed it when you said agitation. I felt it and slowed down considerably at the same time. I have some OCD issues that make me incredibly sensitive to meds. The geodon was flattening me out considerably and the doctor I was seeing at the time said vraylar wouldn’t do that. It was actually the opposite. Vraylar made me feel like it was too affect enhancing if that makes any sense. It felt like I had a perma grin on my face which made me feel crazier. Otherwise I would have stuck with it longer but I get fed up quickly with side effects. Three Mgs is a pretty low dose but it’s a strong medication the dr said I might even be able to get away with taking it every other day. Nonetheless I switched to latuda and while I wouldn’t say I’m happy on it it works more naturally on my depression and I’ve gotten used to the side effects.

I was on geodon for a couple of months and I had serious tremors during that time. But it was good for negative symptoms. I get the same thing you described on antidepressants, I get really smiley

. Maybe vraylar has some antidepressant effects?

When you talk about fluidity of thought are you saying you were able to express yourself more fluently? Having a good thought process is a symptom of high dopamine, I remember I was really sharp in the months leading up to my first episode. Now I can’t maintain a train of thought and this manifests as poverty of speech, which is unfortunate since I have only mild negative symptoms with the exception of this.

I also wasn’t aware vraylar is such a potent antipsychotic, I guess thats one of its advantages.

Was the feeling of being slowed down a positive or a negative for you? Did it help you organize your thoughts better or did it disorganize you? It confuses me when you say you had more fluidity of thought but you felt slowed down at the same time. Maybe it was physical tmrather than mental?