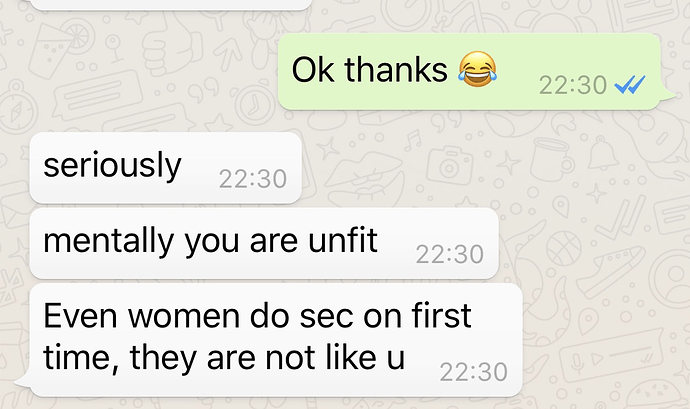 That hurt but it’s true.

Seriously, maybe you could take up a hobby, whenever you post on here it often seems to be the same thing, guys guys guys.

Guys like girls who have hobbies, consider putting dating qt the back of your mind for as short a period of time as you can.

I know but I can’t seem to help it I am not doing it on purpose. Never used to be this type of girl who comes of as desperate. I hate this. And I can’t even blame all of it on a disorder anymore because they adjusted my meds

I agree with @eduvigis (for a change

I don’t think you’re stable at all, and this obsession with dating is a bit too much.

You were considering a therapist, did you look for one?

I @Minnii even the Meds not helping probably cos some of it is me. I am unfit for a relationship as he said. And I met a guy Sat seemed so sweet and decent I did a background check. HE MARRIED.

I am sick and tired of this

Do you think it’s mania or just an OCD?

I don’t know, I’m not a doctor. You need a professional to help you with that.

What exactly is going on in this text message? Is he saying even women do “sex” in the first time?
If so maybe he’s a creep

Yeah I need to talk to someone only problem is therapists work 9-5 i may need to go private. Better spend money there than stupid stuff I don’t need.

Yes, do that. It’s important

He’s calling you mentally unfit because you wouldn’t have sex with him on the first date? He’s sounds like a manipulative douche.

I know but I can’t seem to help it I am not doing it on purpose.

Sounds like me with booze/weed/uppers in the past. It’s an addiction and they only go away with help. What help are you getting for this?

Why would this be an issue?

I work the same

Ish, I had the same obsession after losing my dad. I think I just wanted someone to comfort me during such a hard time. But you’re not being safe and you keep getting even more hurt. Do you guys have hospice care in the UK? We had access to a free grief counselor through hospice, and we met in the evening when I got out of work and my siblings got out of school.

He’s a creep. He didn’t get what he wanted, and then he decided to try to hurt you. Let it go!

I used to like dating when I was single. I would go on a date to have fun.

I don’t believe you’re mentally unfit. You might be emotionally immature, but there’s a lot of that going around.

It’s really hard to be alone, but you learn who you really are, what you are all about, who you want to be, where you want to be, and the type of person you would like to share it with.

I went from dating to nothing for years now, and it is tough. But ive grown a lot from it, and I feel more prepared when I cross paths with the right woman.