In this case study a young man diagnosed with sz as a teen and then later diagnosed with cancer received a bone marrow transplant (a kind of stem cell transplant) and had a remission of his sz.

I hope they will follow his progress to see how long his remission lasts. This gives hope to possibilities for stem cell treatments that do not have to be directly applied to the brain and perhaps could be administered intravenously to avoid surgical risks.

"In a period of 8 months, after the second BMT, patient’s PANSS dropped 60 points, his hallucinations decreased 90%, and he improved his negative, cognitive and social symptoms, which allowed him to gradually reincorporate to his usual social and academic life. Hematopoietic stem cells (HSC) have been proposed as an alternative therapy for many chronic and incurable diseases. In psychiatry, the theory is that these HSC migrate to areas of inflammation in the brain via chemotaxis, and, through immunomodulation and secretion of bioactive molecules enhance neurogenesis, angiogenesis and remodeling of axonal circuits. "

I have thought about it long and hard and stem cells is the only thing that makes 100% sense.

Stem cell may take a century ahead…thats for sure…!!!

No it shouldn’t take that long. What we need is pluripotent stem cells and a scientist willing to look into it. If we started tomorrow the technology would be ready in about 10yrs time.

would be ready in about 10yrs time

If we started tomorrow the technology would be ready in about 10yrs time.

Dont forget it will be super expensive… U and I cant afford it for sure …!!! What do u think…!!

I am sure scientist are looking forward to it …!!!

Some people have died after rejecting new stem cells. It is also super expensive. I think its unlikely to get approved for sz or for insurance to pay for it.
Bone marrow transplant from a donor can cost $800,000 .

A 60 point reduction doesn’t translate to 60% cure. The percentage reduction would depend on where he started, which we don’t know. But it did say his hallucinations (which they said were voices) dropped by 90%.

As some have said, yeah, we can’t be giving everyone bone marrow transplants. It involves chemo, killing off your own cells, probably the possibility of rejection. I’m not sure if you have to take immunosupressants. But anyway, bone marrow transplants wouldn’t be the way, it just shows that new, healthy stem cells can help. How to get them in there without rejection, have them survive, etc is the question.

This is more of a proof of a concept.

Do u know if there is a team of scientists looking into universal donor stem cells for sz? IMO UD stem cells should be ready to hit thr market in about 10yrs tops.

i wonder if his improvement will be permanent?

Not that I know of. It’s a little premature because universal donor stem cells aren’t yet available.

But there is still ongoing research, here’s a good article where the researcher mentions sz and resetting critical periods for connectivity.

Researchers at UC Irvine restored a key feature of young brains, the flexibility that allows for learning and creativity.

Interesting article:"“With all potential therapies involving placing cells in the brain, one has to be very cautious,” Gandhi said. “But what we hope is that this study, along with many others, begins to open the door to the therapeutic viability of cell-based approaches.”"

I truly believe cell therapy is what we are looking for. I am sure there are teams investigating it for Alzheimer’s disease.

Have u ever heard about intrathecal stem cells therapy?(https://clinicaltrials.gov/ct2/show/NCT01019733)

Neural stem cell (NSC) therapy is a promising treatment for traumatic brain injury (TBI). In addition, mesenchymal stem cells (MSCs) have been investigated for the treatment of TBI due to their functions in neural regeneration and their neurotrophic...

I dont think theyll ever understand the causes of sz. Its just too complex. But they should look into Universal Donor Pluripotent Stem Cells (UDPSC) for it.

This is a different person (apparently, different authors on the paper)

He had remission apparently for at least 8 years from treatment resistant sz. If you read the paper, first it says at 2 and 4 years, then further down, 8.

“Thirty days later, his psychotic symptom had almost disappeared. He was sustained without any neuroleptic treatment and need for any other administration. His psychiatric status was assessed by the Positive and Negative Symptom Scale (24). Social functioning was assessed using the Global Assessment of Functioning Scale of the DSM-IV-TR (21). The treatment and clinical course are shown in Figure 1. In 2017, 8 years after BMT, the improvements of somatic and psychiatric symptoms are continued, and the patient is very well and there are no residual psychiatric symptoms. Moreover, his social functioning was drastically recovered, and he continues to work at a famous company” 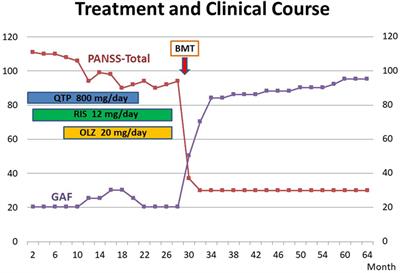 The authors present the case of a 24-year-old male with treatment-resistant schizophrenia, with predominant severe delusion and hallucination, who received bone marrow transplantation (BMT) for acute myeloid leukemia (AML). After BMT, he showed a...