I don’t eat potatoes now because of the weight gain and severe constipation. But I used to like to fry them with olives, onions, nuts, pineapple, salt, and green peppers and man it was good.

I don’t eat potatos often, but when I do I like them fried as hash browns. It seems like the nutrition gurus are always recomending very different types of diets. A few years back I read one guy who was saying we should get most of our calories from plain carbohydrates. Now they’re saying starches aren’t good for you, and protein and fat are okay. Go figure.

To be honest health issues seem to be like fasion trends. Whats good today is cancer tomorrow. I think genetics is a bigger factor in most peoples health. Everyone knows somebody who defied all health warnings ate bacon everyday smoked a carton of cigs a week and still lived to be 97…my great grandma…and then my vegan cousin who never drank or smoked and was a vegan since he was 8 dies at 25 from mouth cancer…

I cut them in slices, put them on the oven with garlic and olive oil, dip them in mayo!

I like them with the pirate’s hat and glasses and the big kissy lips.

Does it make me racist if when i read potatoes its voiced in a Minnesota accent and is often followed by a stereotypical bit example “pootahtooes doncha know now”. We all say tatters and if the whole word is pronounced its ususlly bowtaytoe.

I’m half Irish. Drag a potato past me on a string and I’ll follow you home.

I made potatoes last night with my steak. Little fellas I cut in halves or thirds, drizzled with olive oil, salted with a fine grained sea salt and baked in the oven, they were deliscious. It’s funny because someone gave me the bag of potatoes and I was thinking “what the hell am I going to make these with?” Well…steak.

Just love potatoes. Will eat them in any format cooked for me just about. @velociraptor I am half Irish too!

I like them pretty well, considering I just met them last week. 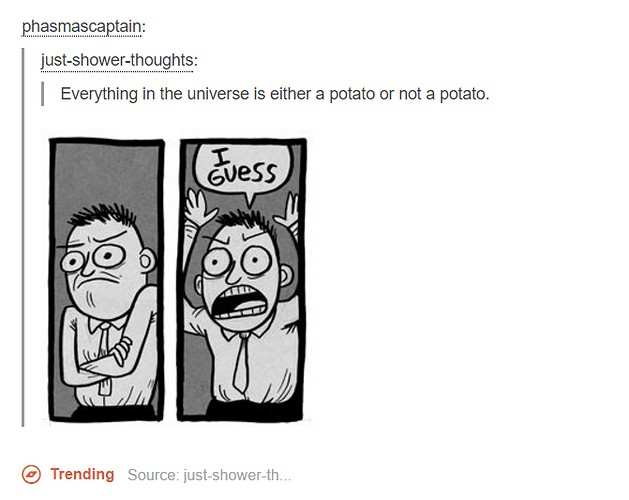