"Have you ever considered testing to see if you are on the spectrum?"

Was asked whether I had ever considered testing to see whether I was on the autistic spectrum as I have mentioned the possibility on several occasions. I have mixed feelings about testing. I guess I would feel more comfortable if the mental health lot decided it was enough of a possibility to warrant putting me forward for assessment. Whilst I think I have an above average amount of autistic traits I’m not sure I would meet the full criteria for an ASD diagnosis. I actually think I fit nonverbal learning disorder a little better but that is scarcely recognised in the UK and is not an official clinical diagnosis.

Whether or not I’m on the spectrum I’m certainly neurodiverse and have difficulties/problems stemming from that. The fear is that if the decision was I’m not autistic that would shut down discussion and help for my issues, as in it’s an all or nothing,autistic or not, situation.

I wonder how many have this ambivalence about testing as though a negative assessment might/would shut down any acknowledgement of their issues.

where do you take the test, I’ll take it.

Sadly @firemonkey I don’t think it would get you any more care. As you know here in the uk we are shipped to the community and the squeakiest hinge gets the oil.

I place high hope on the good outcome in the testing.

The fear is that if the decision was I’m not autistic that would shut down discussion and help for my issues, as in it’s an all or nothing,autistic or not, situation.

Yes, I understand that this is a very difficult situation.

Too many people have seen Rain Man, so an Aspie DX comes with its own stigmas and no additional treatment that I can discern.

My wife the teacher has autistic kids put in her class without aides as an ‘inclusiveness’ measure when you can tell all they are really doing is saving money. My wife has no Special Ed training and can’t do much, especially with 29 normal kids in the class who can’t have their learning sabotaged by the one who moves at half speed.j

I took a bunch of tests previously and they said it was likely, but I don’t think I am? I don’t know. I just took this one and got a 47. It says anything over 34 is likely ASD.

Discover whether you suffer from autism or Asperger's with this quick screening online test.

I took that test and scored 26. It said

You have answered this autism screening in such a way as to suggest that you are not likely currently suffering from an austism spectrum disorder, including Asperger’s disorder.

There are various online tests that give an indicator but you need a psychologist/psychiatrist to give an official diagnosis.

I score above the threshold but just below the average person with ASD on the first and as neurodiverse on the second.

These are my scores for the RAADS R based on conservative,liberal, and inbetween assessments.

I asked my sister to assess me. 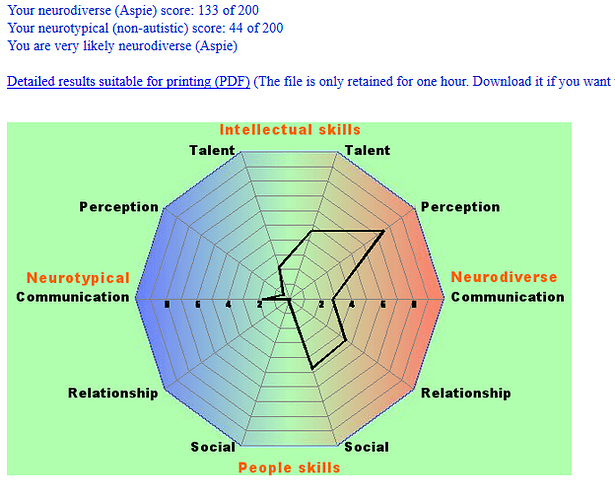 My wife has no Special Ed training and can’t do much, especially with 29 normal kids in the class who can’t have their learning sabotaged by the one who moves at half speed.j

Are you talking about level 1 Autism when you mention those in your wife’s class?

We are talking kids placed in grade 10 English who function at a grade 6 level. They cannot move along with the rest of the class and become frustrated and disruptive.

Hm. Maybe I should actually ask my clinician? Is there treatment for ASD? Is there any point? 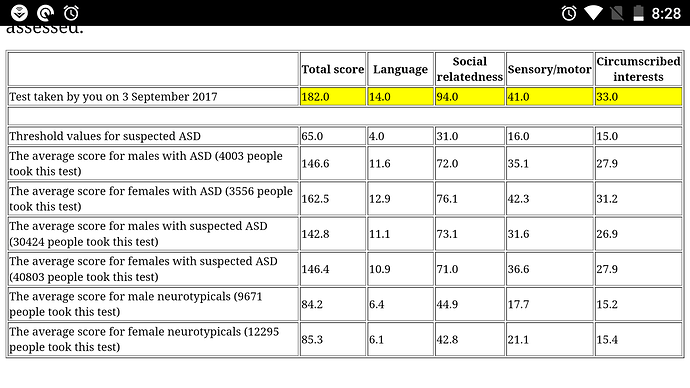 I have mixed feelings about testing. I guess I would feel more comfortable if the mental health lot decided it was enough of a possibility to warrant putting me forward for assessment.

@firemonkey. If you think it would be helpful, just be proactive and request that you get an assessment.

my goodness, that sounds like a nightmare for her. I worked with people on the spectrum for a while, who were well below their biological age, and I could not imagine being tossed in a situation without formal supervision and extensive training! I’d feel so nervous

I think that autism behavioral analysis really is beneficial for both the kids and the caretakers, it makes me sad knowing that they aren’t training towards effective communication on a daily basis, like an aide would do…and frustration is the number one feeling behind destructive behavior for my former clients, I can only imagine how frustrated they’d be if they got put 6 levels above them with nobody to guide them!

It’s a nightmare for everyone in the room, including the neurotypicals who have their own learning sabotaged by this situation.

I wasn’t ready to talk about hallucinations, etc, but my first step in wanting to find out what was wrong with me was to a psychologist to be tested for ASD. After two meetings and a lengthy questionnaire, it was the psychologist’s opinion that I didn’t have ASD… He was right.