I was thinking about this today as I walked back from class. They really are horrible and use just about every underhanded tactic possible to handicap you and shift the battle in their favor. Here’s some examples

-Waiting until I’m going to be alone to strike so I don’t have family/friend support
-Depriving me of sleep
-Striking then when I am half asleep or exhausted/otherwise in an altered mental state
-Using hallucinations to intimidate me (ie making it look like my loved ones are suffering in some way being tortured or killed or corrupted, making me think I am being harmed or sexually abused, etc)
-Using bad things from the past to shake me up
-Reading mind to find all insecurities and using them against me

Etc. and they DESPERATELY want me to separate myself from God because God is literally the only one who is keeping me upright on the battlefield and giving me a chance to win.

The only good thing about knowing this is if they are going to such extreme lengths to handicap and manipulate me into thinking I am helpless it must mean they are quite weak and would have no chance to win against me if I was at full strength.

I still can’t stand how ■■■■■■■ devious those assholes are though. NEVER NEVER NEVER poke your nose into the occult, just don’t do it. (Though they’ll subliminally try to encourage you to, if you’re mentally ill you’ll be especially prone to this encouragement because you make a good meal)

Any way for you to call on some angels to fight and destroy the demons?

My case might be unique but I could call for help with fighting situations. Technically I’d create them.

I had some demons too when I was psychotic (I even thought about trying to find a Catholic exorcist) but there were some angels too. Can you “make” some angels, like Moonwalker said?

I don’t personally believe in religious things like a God, but the things I experienced reminded me of demons.

I have Father (God) who prevents them from actually doing any kind of damage to me. I am technically immune to them physically/metaphysically so long as I stick by Father but that does NOT prevent them from playing mindgames with me.

I used to believe I had demons in my head and pray to Jesus to get rid of them every night.

I wish I knew why they have fixated on me. I have various ideas but don’t really know for sure and none of them quite add up. I have been harassed since I was as young as 5. Maybe even before then considering my mom says at 2 or 3 I was complaining of “bad ghosts” in my room.

How were you poking your nose into the occult?
Do you think this could all be demonic attack or mostly psychosis?

I don’t believe in demons anymore, it was to do with my illness.

Maybe it is the chlorpromazine I take! It could have poisoned and killed the demons in my head. 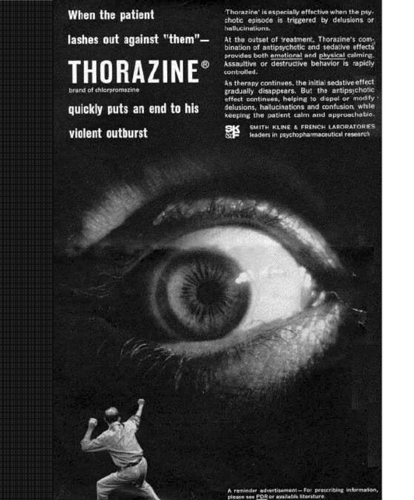 As for your question I really couldn’t say. That’s been a question I’ve been trying to answer for years now.

All this talk about demons made me conjur up a “friendly demon” as he put it.

No such thing that would be like a wolf telling a baby deer that it was a “friendly wolf” and not to worry.

Sorry to stir up trouble for you though.

I just had a dream where an evil government took over and they were catching and beheading people including people in my family in the dream but I couldn’t be bothered I just sat back and laughed. I had to eat some of the severed heads at one point though which was pretty gross. Again all just hallucination…but that’s the sort of thing I’m dealing with.

When I became convinced I was some kind of demon king here to start the apocalypse the demons bothered me less, not sure that helps much though

Well they want me to accept them and basically let them do whatever they want and say the reason why they are being so vicious is because I am disobeying but when I have obeyed in the past it has ended in disaster, always with me suicidal and in a very dark place.

Yes it’s best not to do things because they tell you to, especially if it involves harming yourself or others

Only thing I can think of other than sedatives to sleep the time away is distraction, maybe try drowning them out with music or some such

It’s ok, no worries. My voices are quieted so it’s hard to hear them even if I want to. Unless it’s those times when I can, it’s random

I know this very well and Father has warned me about it however sometimes it is impossible NOT to pay them attention, like when they are practically shouting at me. When one of them wants to communicate it feels like a metaphysical phone ringing in my head, and it just rings and rings and rings and you’re going crazy because you just want to pick it up so it stops ringing because you can’t focus on anything else until it stops.

Or when they mess with my dreams which is sort of their last resort I’ve realized when I’m not paying them any attention. Because I am more vulnerable in my dreams and not really capable of logic I sometimes do things I regret there and give in much easier so long as they offer something pleasurable in return. I always end up so angry when I wake up from those dreams that they took advantage of me.

They do not fight fair. They just don’t.

I think if they want to feed off you then most likely you are stronger than them!