I have heard of some people being prescribed stimulants, which sounds weird to me, but I was wondering if anyone here has and could describe how they help them. With the sedating/disabling side effects of my AP regimen, I was considering asking my doctor about a low dose stimulant, but was unsure. I’m scared they could induce psychosis (or is that only if you abuse them?).

Yeah not good for most but maybe ask doctor about modafinal - not sure the spelling but some use it. I can’t get it out here in oz.

They cause psychosis rrgardless of abuse or not. I used to use modafinil but it sent me to hospital

Your best bet is coffee. Most seem to be able to handle caffeine within reason

I’ve never known of a pdoc prescribing a stimulant. I have had pdoc tell me to lay off the coffee.

I feel like dopamine increasing drugs wouldn’t even do anything for me these days anyways. I take tyrosine occasionally (nothing). I drink coffee heavily (I know it is very mild on dopamine receptors)-(nothing). I haven’t tried Adderall or anything like that since I’ve been diagnosed, but I really doubt it would do anything for me. First and foremost, my brain inflammation needs to be taken care of. Also negative symptoms have to do with nmda receptors, but it gets really complicated.

Or i mean, dopamine is heavily tied into negative symptoms, but most stimulants don’t even target the dopamine pathways responsible for negative symptoms (the mesocortical pathway). (as far as I know). Also we are lacking dopamine in the prefrontal cortex). Schizophrenia is really complicated (unfortunately).

With the sedating/disabling side effects of my AP regimen

Maybe an option might be asking doc if can try reducing aps a bit if its disabling you. Keeping on minimum dose to control symptoms seems to usually work for me. Seems like this is an easier route to the desired result than trying out prescription stimulants. With that said, caffeine does help me to some degree as well.

Antipsychotics are used to be called major tranquilizers. I believe stimulants would have the opposite effect and cause rapid though delusions and psychosis. Just speculating.

According to one of my old doctors they made me worse. He said to think of em as poison to me from now on.

Exercise is the simple best thing you can add and you can do it cheap and healthy.

I went from sleeping 10 hours a day to 8 or less simply adding some decent, regular exercise. And it helps mentally as well as physically.

Yeah I use a pretty extensive combination of stimulants and it’s pretty effect for me. But super easy to over do. I’m taking them in a cocktail at much lower doses then they would normally be prescribed. I.e. ritalin 2.5-5mg is enough. Modafinil 12.5-25mg. Personally I don’t use amphetamines because of the risk of psychosis.

Most people don’t think of it as such but Bupropion is a substitute amphetamine and a pretty decently effective stimulant. Most people would call it an antidepressant because it is a regulated pharmaceutical drug but structurally is it is clearly a stimulant. Same re it’s effects. People need to move away from the current ideas around how they conceptualise drug classes and more generally the stigma against them. Even so @Lightyourlamp is most generally correct.

To me through my personal experience it is undoubtedly clear that they work. At the same time the research shows that there is no clear and or lasting effect. You need to be super careful with these medications and honestly you have to have a risk tolerance which includes planing with fire. Ultimately the same argument for taking stimulants can be made as those not taking antipsychotics but still experiencing symptoms. If they help you to enjoy a life that is more meaningful away from the sedation then it’s really a personal choice but not necessarily the right one for everyone. Still definitely an option. It isn’t often considered but it should be even so amphetamines are really a last resort. 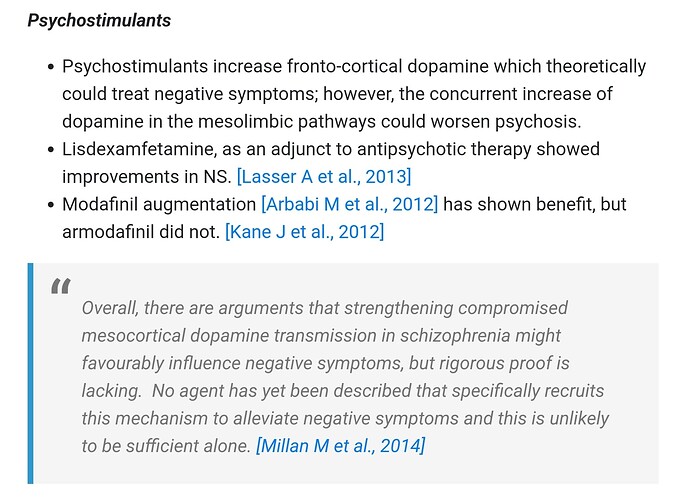 Read some papers on Bupropion as an adjunctive and work your way up from there.

@rogueone
It’s S4 in oz and looks not more expressive then a cappuccino.

@MIDO
Interesting since the Modafinils proposed moa is via histamine also

Yes. And I refused to take them. Because I felt it was not safe. Not the right way to cope with my problems. And couterintuitive to first take a “downer” and then an “upper” to deal with its bad effects.

modafinil is atypical dopamine transporter inhibitor and it increases histaminergic tone via orexinergic neurons. this is well documented in researches on pubmed.

I have been taking modafinil (provigil) for 2 years straight. My medication combo sedates me so much that waking up took me about 3 to 4 hours before it.

I tried to get adhd medication but the doctors refused.

I had about 3 appointments but they came to the conclusion that stimulants will cause me trouble.

I still want to take them but sometimes I think twice about it.

This is just from the Wikipedia my understanding was that Modafinil hit a variety of different receptor targets producing it’s effect in it’s entirety. However my laymen understanding was that we didn’t know specifically which and how much these receptor targets were contributing to the overall pharmacological effect of the drug. This is probably a simplifcation in my mind on my part as I never went into the papers. This was quite a while ago when I was looking into also so maybe the research space and or the conclusiveness of the data has moved on since then. My thought be that if you were some how able create a pure orexin or histamine stimulating agent then you would be able to differentiate the wakefulness promoting effects. I have taken both Ritalin and Bupropion and Modafinil is subjectively not like either of them.

I fully accept now that Modafinils primary mechanism of action is as a DRI. What are the subjective effects of the histamine agent you are taking like. Are you able to describe the feeling for me a bit? 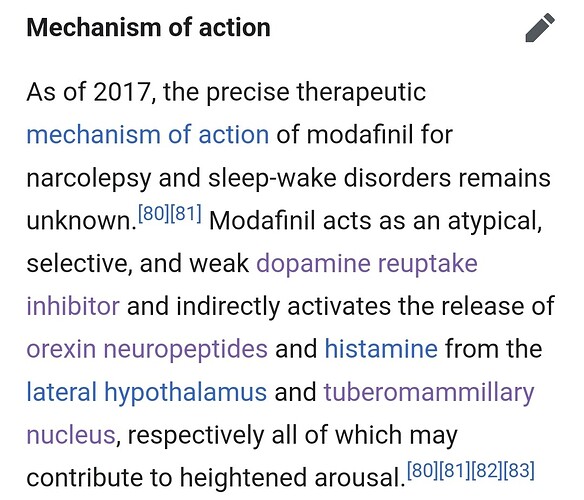 well, when i was taking amisulpride (solian) it caused me sedation so i tried armodafinil at low dose 50mg/day but i didnt notice any wakefullness effect and i developed skin rash as a side effect of armodafinil so i stopped taking it. now i am taking it as needed at 50mg dosage when i want to inhibit craving for addictive subjects and complusive behaviour and it works very well for this purpose i guess its for DRI effect but i dont get high or feel euphoric from taking it. i just feel that this complusive behaviour is not pleasing anymore and is not rewarding and dont have craving for it and i feel i have more self control on my addictive symptoms.

Oh this is super interesting! I know DRIs reduce the effects of amphetamines for example. In a way it makes sense that a DRI with low receptor activity would reduce cravings. I think there are preliminary studies on it’s use in anti addiction was it prescribed to you for this reason?

It also makes sense that a histamine agent triggering a reaction in your skin. Is this a common side effect?

i take armodafinil on my own none have prescribed it i just searched on pubmed and found researches on it. i take it for unusual addiction (sexual) not for drug abuse. and there is reports for skin rash and even steven johnson syndrome which is fatal side effect but its uncommon though its considered to be rare and to be in the safe side i take it on low dosage and as needed not daily only when i have craving which is happening to me from time to time