23andMe ancestry and the dots

Has anyone else who’s done a 23andMe test got the dots yet in their ancestry report? 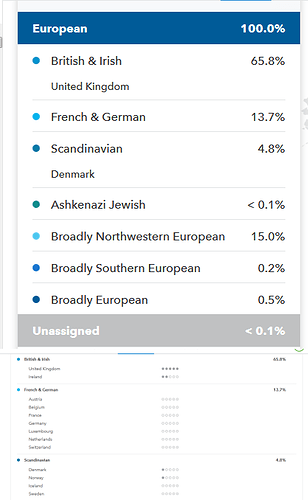 My parents never received dots.
This must be something new.
Looks interesting.

It’s gradually being rolled out over the next few months. Given my ancestry the 5 dots for United kingdom makes sense.

With the Irish dots: I have ancestors born in Ireland but with not particularly Irish surnames ie Bowman, Clark, Johnston , Sheppard, Lowrie and Sanderson .

With the dot for Denmark and Norway: I have one line the Fletts that may have Scandinavian origins ie Norway- Orkneys- Findochty in Banffshire. Any Norwegian connection would be many centuries ago though. http://myweb.tiscali.co.uk/sheena_charles/flettorg.htm

My heritage gives me a 5 person triangulated match of 12cMs with 4 people from Norway and one with an English surname but she has 50+ surnames from Norway.

This is pretty cool thanks for sharing your ancestory profile. I still have some reserves against doing one.

I was surprised it said Denmark under Scandinavian. Searching Dna relatives gives me 4 Norway 2 Sweden 1 Denmark.

My heritage gives me 42 Norway 24 Sweden Denmark 8 . The largest segments for the Denmark matches are smaller than for the Norway and Sweden matches.

The biggest shock is people who find they were adopted or their father wasn’t their birth father. I had entertained misgivings about my father which were disproved by his test on Family tree dna showing we shared the right amount to be father and son.

Then there is the case of people who know they were adopted and want to trace birth family. There are sites such as http://dnaadoption.com/