Which AP had least sexual side effects

I’m having low libido, hard to achieve erection, DE and dry ejaculation on invega. I am in a real distress. I want to change APs but haven’t talked about it with my psychiatrists because she is on a holiday. So which AP your sexuality is intact?

Zyprexa for me had the least sexual side effects.

Im on Clozapine now and its so so…

I take abilify and it has actually made my libido go a little crazy. Turned into a big flirt too and very outgoing. Turns me a little maniac and restless too. Probably the reason i had started working out alot.

Ive been off my meds for 1 month now and im mostly back too being my usual lazy loner self. I do plan on going back on my meds tho. Just wanted a break.

Lurasidone probably the best for me. Everytime I hear someone complain about this type of thing they are normally on Invega though.

FYI risperedone
Is known for sexual side effects too.

For me it was Abilify.

ive never had sexual side effects that i can think of ive been on zyprexa geodon abilify and currently on invega libido still normal, i did notice that when i was on geodon it seemed like my libido was super high but i felt really crazy on the med so it might have just been mania or something

Abilify makes me more sexual at lower doses and less so at higher doses. Weird how that works.

Zyprexa though all I cared about was sleeping

I like abilify. It didn’t decrease my libido at all.

Antipsychotic-Induced Sexual Dysfunction and Its Management

Sexual dysfunction is a common condition in patients taking antipsychotics, and is the most bothersome symptom and adverse drug effect, resulting in a negative effect on treatment compliance. It is known that hyperprolactinemia is a major cause of...


This will give you a pointer if it’s sexual dysfunction. Scroll down to the specific drug names. There might be better numbers out there by now.

If your sexual side-effects are tied to hyperprolactinemia, this will give you an idea of which meds that will not increase your prolactin levels. Scroll down to “6.3 PRL and Second-Generation Antipsychotics (SGAs)”. 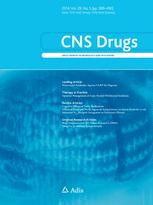 The Effects of Novel and Newly Approved Antipsychotics on Serum Prolactin...

Since the 1970s, clinicians have increasingly become more familiar with hyperprolactinemia (HPRL) as a common adverse effect of antipsychotic medication, which remains the cornerstone of...