What was your favorite concerts you've been to?

Mine would be the Eagles, the Rolling Stones, KISS (only in 77), Heart, Tom Petty and the Heartbreakers, Aerosmith, Bob Dylan, Smashing Pumpkins…there’s more but those were my favorites.

A local band called Skanksters. What genre you ask? Why…ska!

It was one of those band that was total magic on stage. The venue only took about 400 people so it was a pretty intimate experience. I might feel different now, but when I was in my early 20’s ska really hit the spot.

I’ve only been to one consert and that was Rolling Stones in Stockholm.

But I attended the big day out and that was awesome.

I don’t know if I could do it sober and I e been avoiding people but good memories.

He tore his shirt off and it was glorious. 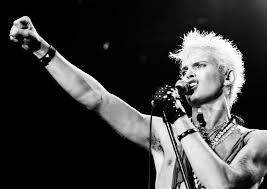 Ozzy Osbourne and Zakk Wylde in 2002.

Hard to choose a favourite.

@Charles_Foster I would kill to see Billy Idol…I listen to him still a lot.

He really knows how to put on a show.

That was a great cameo!

AC/DC Hell’s Bells tour. I was there the night the roof caught fire in Detroit. Crazy! But also a blast

REM, the Cure, I saw Rod Stewart with my mom, Bon Jovi and Inner Circle(the bad boys bad boys what ya gonna do)

Even old. Ozzy Osborne was great. Kept saying one more song. Sang all night. I love seeing Kiss and Metallica. There is a Metallica cover band called One that puts on a really good show too. I liked Motley Crue, Bon Jovi, Guns and Roses, Cinderella. All the 80s hair bands. Probably seen them all.

I go see Shania Twain whenever she tours also. Concerts are too late for me now but I used to go to a lot of them.

@TomCat wow one of my favorite eras of rock…love all the bands you mentioned, especially guns ‘n’ roses and cinderella and ozzy. would kill to see Metallica…!!

I saw Metallica once in Japan. Took my son. It was his first concert. He was in the 3rd grade. Early 2000s. He loves 80s music also.

man, that is so great…do you rememger all the bombs Kiss used in their early concerts? @TomCat