What concerts have people been to?

Ive been to a few jam bands that i never got their names cause they were free and outdoors. Then ive been to numerous hip hop concerts like, del the funky homosapien, people under the stairs, wu tang, blue scholars and even tyler the creator. My favorite was definitely del the funky homosapien. What about u? What concerts and what was ur favorite?

Though i wish i was born in 1950 so i couldve seen all the rock and motown bands. That would be epic. My parents have no idea how lucky they are

If I still had friends I’d go to more concerts. Tool and Black Sabbath (diff concerts) are coming nearby soon, might go with my Dad. We went to Hillsong united, boy that was a big mistake.

I can’t stand Tyler the Creator he sounds angry and like he wants to kill someone in his songs.

Heres my 2 cents on Tyler. His instrumentation is quite good but his lyrics are a wannabe eminem. The concert itself was quite good but only like 2 hours. And id like to see Tool too everyone says they are epic

Yes, Tool would be epic, I wish I didn’t have crowd anxiety. A lot of their songs are 10 minute Native American drum solos but other than that I’d be into it.

Saw Wu Tang with RATM back in the day.
I’ve been to quite a few. From Ray Charles to the Dead.
Hard to pick a favorite.
Got to hang out on stage with DJ Logic while he was spinning and Col. Bruce jamming. That was pretty rad.

I haven’t been to many. Danzig, Guns & Roses, Metallica, Faith No More.

The Danzig concert was my favorite. I was right in front, shook Glenn Danzig’s hand and cut my finger open on John Christ’s guitar string.

When did you see Metallica?

When did you see Metallica?

On their stadium tour with Guns & Roses and Faith No More. They kind of sucked but GnR was awesome.

It’s the consensus opinion that Metallica sold out and sucked after four or five albums. I’d still see them, though.

Think my fav has to be taking the kid to her first festival and watching her lose it front row Girl Talk.

Oh Holy Hell! How could I have forgotten to mention seeing Type O Negative? Great show, great band, I miss them.

I stopped going to concerts just watch them on Palladia channel was just watching No Doubt playing in Germany.

U2 multiple times over many years, Van Morrison, The Chieftans, Sade, and a Star Wars concert that John Williams himself partially conducted, plus many many symphonies…

Xmas present for the kid 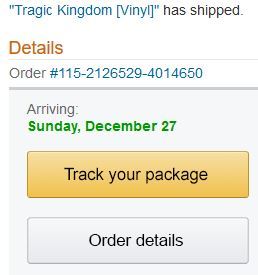 Time for the classic rock countdown. Well, I never try to hide my age so here goes: My first concert ever was Led Zeppelin in 1977. My next concert was the Rolling Stones in 1978. I saw Bruce Springsteen in 1979. Those were before I got ill. Since I’ve gotten ill I’ve seen Pink Floyd, R.E.M., Sheryl Crow twice, Bruce Springsteen again, Bob Dylan, Heart, John Denver, Huey Lewis and the News, Keith Richards solo, Bonny Raite, Black Sabbeth sans Ozzy Osbourne. Maybe one or two more that I can’t remember. To tell you the truth, when I saw Led Zeppelin and the Rolling stones the next day, I couldn’t remember seeing them play.

I wish i was u lol

Well, we can arrange that.