Tropic thunder is just hilarious, see it if you haven’t

Its name is simply The Pike

It was about a fighter. I dont know why i found it so intetesting, but i did.

I dont know if anyone else would like it as it was not very main-stream-America. It was was a bit off the beaten path of what most people would like.

The magicians, of course…

@MissJennyJen, Flowers for Algernon is my second favorite book!

Oh god, I have to pick? Well, my go to most rewatched show is probably Star Trek TNG. Favorite book is Ship of Theseus. No idea on movie. There are too many choices and I don’t watch many lately.

Show: stranger things and bones
Book: the hobbit and LOTR trilogy
Movie: so many…august rush, guardians of the galaxy, see above books as well in movie form.

My favorite show is probably “Oz” or “The Wire”,

Also, “Summer Heights High” and “Kath and Kim”. Sorry, that’s not quite picking one, of anything…

Favorite movie is probably “Oldboy” (the Korean original) or “Network”.

My favorite book is “Three Bags Full: A Sheep Detective Story”. Its not serious, or life altering, but its a great story and I love it. I could read that book a thousand times. Its surprisingly insightful for a book about a heard of sheep solving a murder.

I highly recommend it. 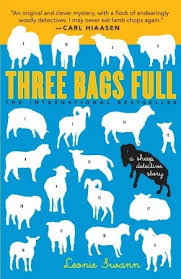 I forget how funny Wet Hot American Summer is,

Did you see the show they did a couple years ago?

I don’t know if it is my favorite movie, but I watched a very good film noir on the internet last night free of charge. It was called “A Town Without Pity”. It was grim, but it was also mesmerizing. It starred Mike Douglas.

Did you see the show they did a couple years ago?

If you’re referring to Stella, yes I saw that show. Pretty dang funny, though I understand why it lasted only one season. It’s a rather quirky kind of humor.

Harry Potter hands down. I’m 26 and still listen to the audiobooks at night. Haters I’ll give u my shrinks number if u think I’m a douche

My favorite show is my life-a version of the reality show Survivor where I try to survive under challenging conditions.

But I was talking about this:

Created by Michael Showalter, David Wain. With Marguerite Moreau, Zak Orth, Paul Rudd, Michael Showalter. Follows the counselors and campers on their first day at Camp Firewood in the summer of 1981.

They were somehow able to bring back every single one of the original cast.

Nice. I had never heard of it, but I suppose I should look into it.