Struggling with something that happened before I was medicated

Okay, so I had a boyfriend before I was medicated. He realized that I was sick when I moved in with him and was very sweet to me about it. I heard his voice in my head telling me he was attracted to his female friend who was being very rude to me and I freaked out and attacked him. I didn’t hurt him but shortly after this he yelled at me to leave and he knew I had nowhere to go.

His female friend that was being rude to me attacked me, cornering and punching me while he stood by and watched. She called the police on me and wouldn’t let me get any of my belongings. He blocked me on Facebook after I left and he had no phone so I had no other way of getting ahold of him. My mother found out about what happened and asked him via FB if she could pick up my things and he said yes, that he would get ahold of her the next day. Then he blocked her too and I had no way of getting my things back.

I feel terrible for attacking him and now that I’m medicated I know it was wrong of me and I would never do that in a normal state of mind. I am heartbroken because I still love him but I’m torn because I feel like he should have at least given me my things back. But then a part of me thinks that I probably scared him and he just didn’t even want anything else to do with me.

I do think. Yes, Yes, a big YES, you have genuine reasons - you dont have to be sorry you have committed no fault.

I’m sorry this happened to you.

I’m sorry your hitting this remorse. You have every right to be ticked that he even blocked your Mom and won’t give you your stuff back. If it’s been a long time ago he might have already gotten rid of it.

Yes… standing by and letting someone beat you up isn’t cool… AT ALL.

I can understand the heart break of loosing someone this way… but there’s nothing you can do about it.

Grieve… let go… and don’t close your heart to a next time.

Thanks for the kind words. I’m trying to get over it. It happened about a year and a half ago and it still hurts. I suppose it always will hurt because I loved him a lot, but what can you do but learn from it?

I’m torn because I feel like I messed up by attacking him and I still love him but at the same time he really hurt my feelings by letting his friend do that to me, kicking me out and not giving my stuff back.

You might want to dig into some of this stuff. 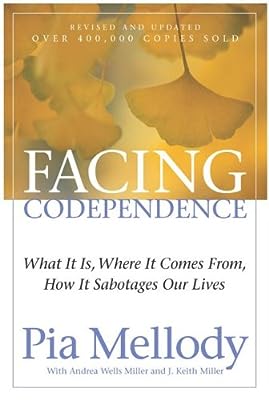 Facing Codependence: What It Is, Where It Comes from, How It Sabotages Our Lives: Pia Mellody, Andrea Wells Miller, J. Keith Miller: 9780062505897: Amazon.com: Books

Revised and Updated With Over 600,000 Copies Sold Pia Mellody creates a framework for identifying codependent thinking, emotions and behaviour and provides an effective approach to recovery. Mellody s ...

(Don’t feel “made wrong” here. This stuff is really common in this whacked out, media-brainwashed, belief-bound, romantic cult-ure.)

I don’t think you need to read about codependency and love addiction. That’s a little diagnosis-happy.

You are facing stigma. It’s what most normal people think of us and how they treat us. It’s a big problem that not many even want to touch. They think “sick and dangerous” when for ducks sake can’t they just call me “bright and handsome”?

lol but it’s not a laughing matter.

You should recognize that you are suffering a loss. Just let go of him, he’s shown his true colors. “In sickness and in health.” He ain’t holding up to that. So don’t hold on to him.

You were sick and suffering from symptoms of a brain disease. It’s not your fault, you face double guilt because you did something wrong and you were mentally ill. Don’t feel guilty, understand that it wasn’t the real you.

The real you doesn’t deserve to feel remorse over some dick who treated you unjustly.

Be proud to be medicated and thinking much more clearly than you once did. It’s something that not everyone can have the chance to appreciate.

I don’t think you should be very critical of yourself. People do this even if they are in the right state. And its not right to not have ur belongings back u have every right to that.