Recent research shows that sodium benzoate may be beneficial as an add-on therapy (1 gram/day) in schizophrenia.[9][10][11] Total Positive and Negative Syndrome Scale scores dropped by 21% compared to placebo.
Wikipedia article on Sod. Ben. It is water soluble and 1CC (ml) volume is about 1.49g
As per Wikipedia ref 1g per day as ADD ON TREATMENT gives 21% better effect than placebo
ANY ONE HAD TRIED THIS ?

Sodium benzoate is used as a treatment for urea cycle disorders due to its ability to bind amino acids. This leads to excretion of these amino acids and a decrease in ammonia levels. Recent research shows that sodium benzoate may be beneficial as an add-on therapy (1 gram/day) in schizophrenia. Total Positive and Negative Syndrome Scale scores dropped by 21% compared to placebo. Sodium benzoate is used to treat hyperammonemia.

I’d like to see a study by a scientific organisation. What is referenced in the wikipedia?

Hey bade bhai aap agaye phir …ur welcome…how are u and ur son. Lane and coauthors examine the clinical and cognitive efficacy and safety of add-on treatment of sodium benzoate for schizophrenia.

Thanks. He is OK. So how r u ? Doing well I suppose
Wish u the best

There are few studies on it. Wikipedia ref which I gave above has details. As per Wikipedia it is 21% more effective than placebo. The other ref also gives detailed evaluation by JAMA Psych edition.

Thanks looks like you r doing really good. Happy to know that.

Am still struggling…does ur son have a job …can he work…!!!

No still long way to go.

(see image below) The only item of the PANSS negative subscale that specifically measures motivation and pleasure is N4. Passive/apathetic social withdrawal … Lots of the other items could be partly explained by positive symptoms or cognitive deficits. So, a 20% improvement in negative symptoms in the case of Sodium Benzoate doesn’t mean anything really… Like @Andrey said, they should specifically measure changes in anhedonia levels. All atypical antipsychotics supposedly improve negative symptoms but in the studies they never say which specific so-called negative symptoms actually improved: I suspect it’s because the PANSS negative subscale is just too broad and for example, antipsychotics may reduce paranoia which may have an impact on the Emotional withdrawal or Poor rapport items but none whatsoever on apathy/anhedonia/motivation. Atypical Antipsychotics also increase dopamine in the prefrontal cortex, the area of the brain responsible for cognition, and thus may improve the Abstract thinking item for example. For marketing purposes/ to sound good, companies will claim that antipsychotics improve negative symptoms ‘in general’… 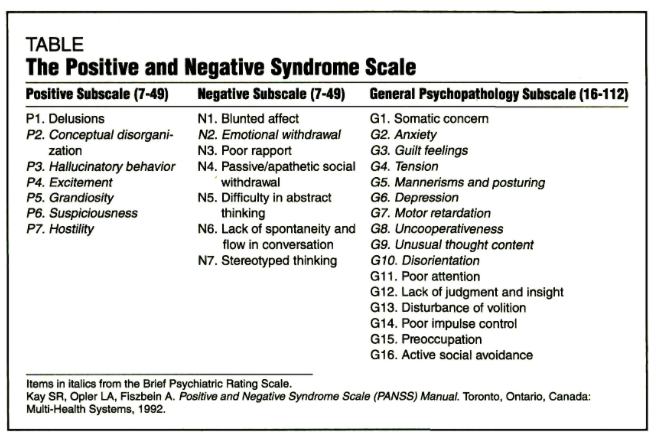 Got published in JAMA.

Liked the detailed analysis that you gave and many thanks for that. Would appreciate your comments on Sarcosine referred here in this forum

There has been quite a bit of good research over the past 8 years on a dietary supplement called Sarcosine (or N-methyl Glycine). It is a natural amino acid that you have already in your body. Sarcosine seems to be the only thing that has some good clinical research data showing that it can help people who have schizophrenia and who suffer from some negative symptoms (the cognitive/focus issues, lack of motivation, and negative mood/depression issues that are common with schizophrenia. We have a new summary of this research here that we encourage you to read: http://www.schizophrenia.com/glycinetreat.htm It is available from a number of online stores at different prices. BrainVitaminz a…

Have u ordered sarcosine dear brother…!!

Which brand do u orderd ebay or other brand…have u notice any improvement …!!!

I have tried sarcosine for about two weeks and felt nothing at all. Some people on this forum say it helped them from the very first dose with their lack of motivation, pleasure too I guess… Maybe I should have tried it for a longer period, but I doubt it would have changed anything. My problem seems to stem from an under-active mesolimbic dopaminergic system (main reward pathway in the brain), and only three substances, which all temporarily increase dopamine in that specific region, have helped me regain some motivation, and to some extent pleasure for a few hours, and those are Vyvanse (amphetamine), coffee, and ritalin. Sarcosine does not increase dopaminergic transmission, at least not in that part of the brain as far as I know. What are your symptoms @manojdivatia? Does music sound flat and everything seem colorless/grey and tasteless to you?

I may try agmatine next (which can be ordered online and which works in a similar way to one of ketamine’s mechanisms of action), maybe pramipexole also…I may also ask for some kind of opiate like suboxone to take once a week (in order not to develop a tolerance) so I can have a break from this torture once in a while…I want opiates because the “high” is longer-lasting and smoother than that of amphetamines I think… I’m also waiting for ALKS-5461 which is a new antidepressant coming out in 2018 which MAY work for anhedonia…

Of which only coffee is available in my country