Schizophrenia is not Demonic Possession

The Journal of Religion and Health is an allegedly peer-reviewed journal that claims to “explores the most contemporary modes of religious and spiritual thought with particular emphasis on their relevance to current medical and psychological research.” In addition to clinical and statistical papers, they also make room for papers that are “impressionistic” or “anecdotal”. With an impact factor of around 0.8, it barely gets more citations than the average crank journal.

A recent paper published in this publication cements this views. Without any scientific evidence whatsoever, Irmak (2014) makes the assertion that hallucinations associated to schizophrenia are really the result of demonic agency. Demons, according to Irmak, creates real sensory images which the individual misinterprets as an hallucinations. This paper is so blatantly absurd and anti-scientific that it is hard to take seriously. Does this person really believe the stuff he is writing? Why did the journal publish such an obvious piece of nonsense? How on earth did it get passed peer-review? There are many questions that demand answers. This post will go through the claims in the paper and then discuss the responsibility of editors and publishing companies. 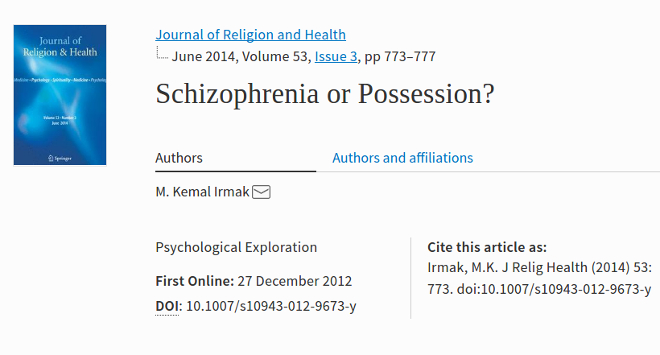 Paper wrongly claims that demons cause schizophrenia and that faith healing is the "cure". It isn't.

I don’t know who it is, but is someone in my case, i don’t know about all of you.

It should not be debunked. In some cases it is demonically caused. Possession is very rare, so calling it possession is wrong. Oppressed by demons is a better term to use. A demon on the inside would cause a complete breakdown, and you would end up with something similar to the movie The Exorcist.
Not all cases of SZ involve demons but some do. Others involve trauma, brain abnormalities, technology. Some of it is the way our brains perceive things and modern society has lost the answers, though the answers were readily available in ancient societies.

In 1983 I wrote a song…just came to me out of nowhere…talked about being cast out all the way, cast out of our graves, turned against the world, madness, fooling and deceiving, and the first line went “No ones to blame, we were taken from our graves, on a dark night long ago, we’ve been told by one who saves. We make the thunder in the mountains and the skies, walking through our nightmare as our land slowly dies…”
talked about Child of dawn…

Had never read Isaiah 14 about the fall of Lucifer 'son of the morning" (child of dawn)…cast out of heaven, cast out of his grave
“But thou art cast out of thy grave like an abominable branch,” (vs 19)

Spooky!
And 'told by one who saves"…JESUS, the Bible, but I had never read that!

When I became a Christian I called upon God to cast it out. OMG…the demon was there!

I don’t buy into all this demonic possession crap - spiritual crisis/enlightenment maybe - but demons taking over ones body, no. I do believe that our brains are involved somehow, because the meds we ingest were designed to alter/“fix” our brain chemistry