Peeking into the shadows of negative symptoms: Avolition plays the lead role? 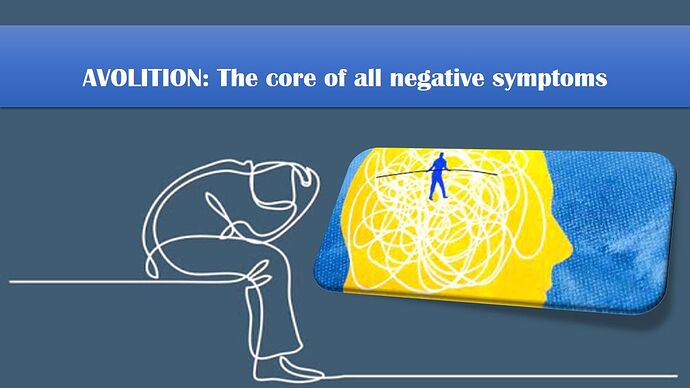 Peeking into the shadows of negative symptoms: Avolition plays the lead role?

Negative symptoms are one of the most difficult to treat traits of psychiatric disorders. This calls for a better understanding of their mechanisms which can pave way for better treatment

I manage to keep a proper house, and take care of my self, but i can sit for hours in my couch, staring with a motionless face and listen to music.

One of the reasons i drank, was to feel a spark of life. But in the end the spark turned in to a fire, i was burning my self up and had to stop.

TCDS has been shown to help negative symptoms.

See my post on the flow depression machine for details:

There is no point in separating a group of sz symptoms from the rest of the other and naming them Negative symptoms,under the pretext that it does not respond to current treatment methods !

In any case,there is no existing treatment that can intercept the casual factor,its destructive functional behavior that causes change and disorder which ultimately leads to the emergence of all symptoms !

Without any exceptions,there is a sudden unexpected malicious change that occurs in the basic meaning of each self-idea that the individual"s mind understood,it will inevitably result in the emergence of every symptoms (whether the individual suffers froms it or it is diagnosed by the researchers)

Until this moment,there is no drug invented by humans that can hinder / suppress the process of altering the meaning of the self-ideas that the individual|s mind has just understood,which occurs as a result of the pathogen destructive functional activity outside the framework of the genetic program of the cell and the rest of the brain regions

In all circumstances,it is imperative for the mind of the individual himself to suppress the process of change that take place in the concepts of self-ideas,whereas there is no opportunity for oneself to practice any positive behavior related the daily life events or personal interests

In reality,the global scientific research does not have the enough information that makes a clear distinction between the whole living health condition of sz (the main structure/ existential form) And all types of symptoms that arise from the functional effect of the condition’s pathogen (Hall.) on the higher cognitive processes and the chemical background that associated with them

Medication initially helped with my positive symptoms of psychosis and delusions. But, with time, my current medication Abilify has helped also with the negative symptoms. It has taken time, much time though. I kept going off my medication and returning to psychosis about 7 times. I went to the hospital each time. Now, I am older and sick of hospitals. My goal is to stay out of the hospital now if I can help it. I think for me being compliant for over three years has made a big difference in my outcome. Abilify has definitely aided in overcoming the negative symptoms but still has not been 100 percent effective. I say this because I still have problems doing self-care and self-maintenance. I eat at times healthy then at times rather unhealthy. I also don’t care about my appearance at times. Is this laziness or avolition? I don’t know, you tell me. Overall, I’m doing much better but don’t fool myself into believing I’m totally fine. I’m not! I suffer from obsessive thoughts and anxiety, but I attribute this to stress I’ve incurred from working and being on my own. Life is ok and has improved dramatically for me since I’ve been compliant. Now, the trick is to remain compliant and healthy.

When a sudden,unexpected change in the self-idea concept occurs through the intervention of the psychosis"s pathogen (Hall.) ,this must be followed by < change /deviation in the personal response behavior,that will happen in the case if the person ignoring the changed concept and does not make any mental effort in order to modifying,correcting and returning the changed concept to its original !

So,do not search about any type of medication to correcting the mythological changed that occur in every seconds in the self-idea concept because the modification need to a conscious mind not a chemical drug !