Ok so this is something

I don’t have a need for religious discussion, you talk like all I talk about is religion which is rubbish, I have my own opinions but I don’t push them on people.

And yet you regularly get suspended for pushing religious content. The fact you are turning down an alternative source to discuss such matters suggests to me your behaviour is deliberate and designed to get a rise out of people AKA trolling. You know what you do upsets people and yet you still persist with it. That’s antisocial and selfish.

I think moderators are right about this

I stolen this from @pixel 's pocket

or lack of insight

If I were a betting man…

If I were a betting man…

After his turning down of an alternative site for expressing his religious thoughts I’m beginning to wonder whether it is just lack of insight. He’s been told countless times he upsets others but doesn’t seem to give a damn about that .

Well, here’s an example of how religious discussions affect me… I’m a 26 year member of Alcoholics Anonymous. The concept of a Higher Power is interwoven through the entire AA program. I’ve found it works for me and I’m basically an agnostic doofus. I don’t really need to discuss that here because this place isn’t AA. Generally – if I do bring it up – it’s when someone else in this community says they’re trying to quit drinking and it’s in that support context. I don’t need to bring it up here every day because I have other places I can talk about that (I’m in AA chat rooms several times per week).

As to those religious guidelines I wrote a few years back? It’s my opinion that they don’t work very well. I was trying to be accommodating, but some things can’t be accommodated. I support the direction the current moderators are headed in and they should be the primary source of guidance on this issue.

@anon51414962, those rules are outdated because they were causing harm to people. The current rules are:

We don’t allow religious discussions on this site. This for a couple of reasons. First, it tends to cause arguments, because for some reason people can’t seem to just respect each other’s different religious beliefs. Second, many folks suffer from religious delusions. It is one of the top three topics of delusion, alongside aliens and government conspiracies. We don’t allow discussions on those topics, either. Third, there are many members here who were subjected to exorcisms by family members who, sadly, did not understand their illness. Those memories can be very traumatic for those individuals, and they don’t need to be reminded of them.

And these are the official rules that we are in the process of updating. Either way, the rules have been broken.

I don’t need an alternative BC I don’t generally talk about religion, and I dont know why you think I am trying to get a rise out of anyone, why would I troll? I am here to get and give support,

And I can’t see how what I write hurts people, I just don’t get it

You have had six posts about religion deleted in the past two months. Would you like me to post them, so you can see examples of how you have been posting excessively about religion and hurting others?

I am here to get and give support,

You are not being supportive when you insist on continuing to post stuff you have been told upsets people. 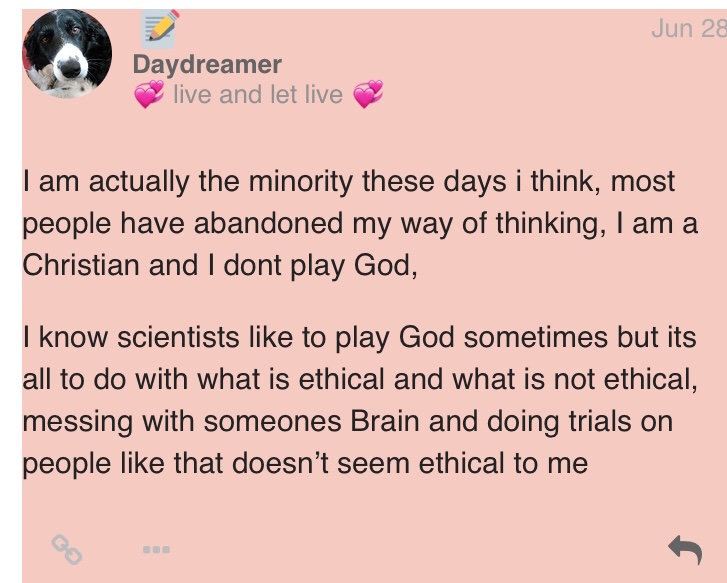 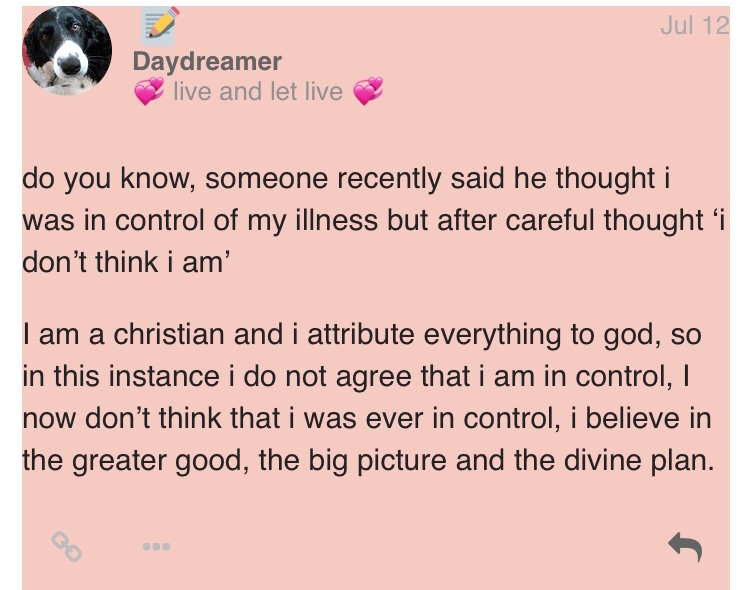 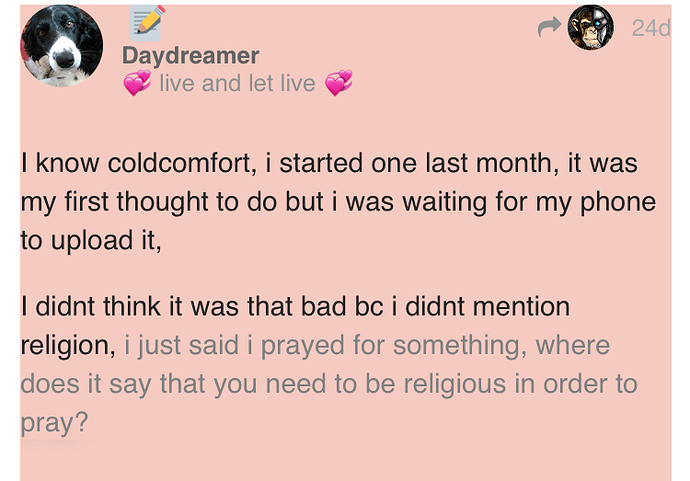 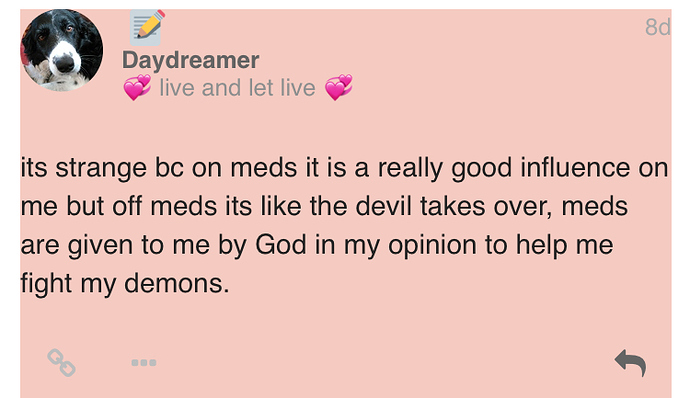 The only reason I haven’t closed the thread is because @Resilient1 is convinced the mods have been bullying him for no reason. I figured if he could hear from others that his behavior is harmful to them, he might realize that this isn’t personal, and we have valid concerns.

Do you remember the parking ticket thread?

He’s not listening to any of us.

those rules are outdated because they were causing harm to people

100% agree. Tried it, didn’t work, time to move on. They should probably be deleted or at the very least unlisted.