Not as smart as some of you

I took the free iq test at www.free-iqtest.net. I scored 111, the lowest score anyone is admitting to. I didn’t think I would do very well on the test because I know my brain doesn’t work very well.

Hey man I’m to scared to take on of those tests again… pride be damned.

That is still in the upper half of the population… just seems like the only people who talk about IQ are 120+ folk… because the human being is naturally either vain and pompous or shy and reserved depending on where their assets fall.

Those tests aren’t accurate sometimes. You’re probably smarter in some ways that the tests don’t reveal. Life isn’t all about math and geography, It’s about experience and potential and attitude.

There are a few test where I’ve gotten 130 on… but did that help me plan my day better?

I’d rather get through my day easier then worry about some number assigned to me.

You’re probably not as dumb as some us of either.

Wise words. Everyone has their own strengths and weaknesses

I am terrible at Math problems, so I dont score super high on these tests - think that last time I scored a 108, which is still pretty good considering

I don’t really care to think that “intelligence” is really necessary for me anymore, especially not mathematics or science. I’d rather be sentient & have perfect physiological performances and have 0 IQ than be smart but patently experiencing jack-■■■■ in reality.

I did the test and got 134 - and being honest - on most of them I just guessed and didn’t actually understand the questions.

I scored 136, but I swear to God, if you ever saw me actually trying to do anything you’d think I am almost retarded. All the jobs I worked at I was way behind everyone else. I don’t know how to operate a cash register. I am sure you are more adept at operating a computer than me. I really can’t do anything. I knew one guy who scored 760 in math on the SAT. (That’s out of a possible 800 - nearly perfect.) He had his own brand of folly. One time I heard him say, "For someone who is supposed to be smart, how come I’m so stupid?) I really think a person’s IQ score means very little. I’ve met people with very high IQ’s who were totally dysfunctional.

a test does not define who you are.

But I pretty much just guessed on the math and shape questions. I dunno, is 125 any good? I haven’t taken any intelligence tests since high school…about 30 years ago.

But I wouldn’t worry about it @ElGato…A couple of wrong guesses and i probably would’ve been below the 111 mark. 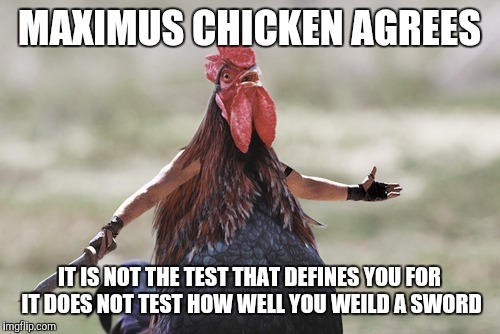 What matters is how well you can use your intelligence in real life situations. Ie it is the practical use of intelligence that ultimately matters in most situations(though creativity as a form of intelligence may not fit that statement).
Your score on an IQ test doesn’t define you as a person.

I did one test that was strictly non verbal and scored 95. On similar tests I have previously scored 56,84 and 78. In all cases I found it hard to work out which shape fitted and most answers were guesses.
My intelligence in that area was significantly below the 111 you scored on the free IQ test.

For me my worst by far is spatial as my previous reply on this topic shows.

yeah, better puting it into practice,

using your intelligence is better than measuring it, what is the measure of intelligence these days anyway? practical use always wins.