Lumosity - Anyone else used it?

I was wanting to see how I compared to others with mental challenges and took the initial calibration testing and my results are poor:

Has anyone else done this and if so what were your results?

I wouldn’t pay too much attention to those numbers on a gauge of how smart you are. Apps like those generaly tend to attract intelligent people.

I haven’t done it really or in depth after my sz, these results were before my sz: 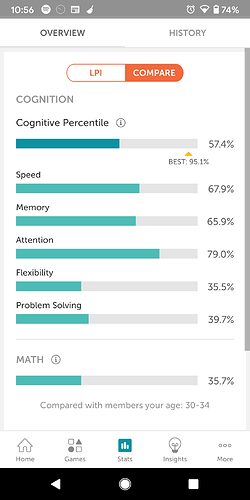 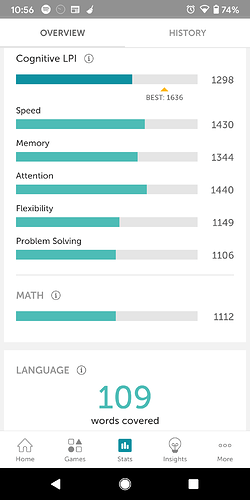 @anon98459728 is right, these tests mean nothing in real life, it just means you’re good only at those specific games.

I do these for fun only.

I wouldn’t pay too much attention to those numbers on a gauge of how smart you are. Apps like those generaly tend to attract intelligent people.

While I agree, you could have worded that a different way hahaha, I honestly don’t care if you do straight up say most people who are using it are smarter than me ha.

I know my cognitive skills are going down which is what I wanted to check how they were compared to others.

I’ve got a free account . I use it occasionally . I’m not convinced it’s worth upgrading to a paid account . The only one I’ve paid for is Cognifit . Most of the games are OK, but I’m not impressed with the way scores can dramatically change , be it up or down.

We had a thread about this not too long ago. They arent an accurate way to measure intelligence and don’t improve your intelligence either - just your ability to play their games (non transferable skills).

I’ve tried it. I tried a lot of them. I didn’t feel like it was worth the cost.

I think I tried the free version of the cambridge app and I enjoyed the listening skills part because I lack that and struggle. I quit them all. I rather read or take a class anyways.

We had a thread about this not too long ago. They arent an accurate way to measure intelligence and don’t improve your intelligence either - just your ability to play their games (non transferable skills

I only tried it out because my therapist said it may be something to help my cognitive issues. I didn’t have high hopes but I would like to know where I am lacking abilities in the form of a statistic, I don’t know a healthy way to go about it all and it would be a bit reassuring if I had things that i could work on.

Intelligence test scores and educational duration are positively correlated. This correlation could be interpreted in two ways: Students with greater propensity for intelligence go on to complete more education, or a longer education increases intelligence. We meta-analyzed three categories of quasiexperimental studies of educational effects on intelligence: those estimating education-intelligence associations after controlling for earlier intelligence, those using compulsory schooling policy changes as instrumental variables, and those using regression-discontinuity designs on school-entry age cutoffs. Across 142 effect sizes from 42 data sets involving over 600,000 participants, we found consistent evidence for beneficial effects of education on cognitive abilities of approximately 1 to 5 IQ points for an additional year of education. Moderator analyses indicated that the effects persisted across the life span and were present on all broad categories of cognitive ability studied. Education appears to be the most consistent, robust, and durable method yet to be identified for raising intelligence.

A drawback with Lumosity is that group play has favored action video games, or that video games were most popular with generation x. Why is the consumer as a customer afraid of Lumosity? Why are games like this in a niche, like for psychology?
Why would others with SZ grab at a game like Grand Theft Auto, or Call of Duty? When these games are on consoles, or handhelds, why wouldn’t they give those games consideration fairly earlier as puzzle, or educational video game? Why does it feel like the user interface changes the results based on the colors in the graphics, or the animation and 3d effects, that Lumosity is changing score results just over the color palette?