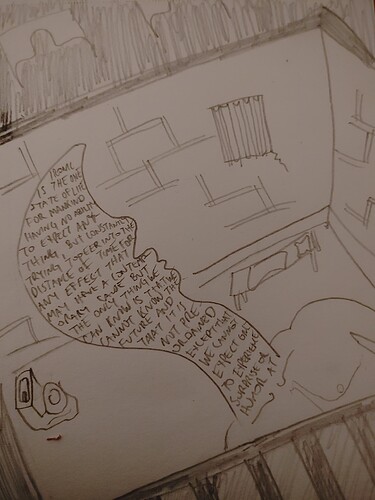 drawing1920×2560 217 KB
I was obsessed with irony once, not sure if I had the right idea about it. I really do think for most of us sz is a cosmic irony in that we would have lived normal successful lives then the opposite happened. At one point in this ironic turn in my life I was thinking irony was the human condition given our limited powers of expectation but general habit of speculating at things. Very rarely do our fears, expectations, anxieties, dreads, worries, delusions ever materialize. Irony is also when what we expect happens.

Even though I think I don’t have positive symptoms anymore I still think about the things I was delusional about and try to make them make sense, maybe to redeem myself. But irony is one of those things were someone will often counter your observation with a “that’s not ironic”. Is that an expectation we have, that something is ironic? If so then maybe it’s true that I can expect nothing right at all.

I was really preoccupied with it when I was sick, my brain was having some serious neuron misfires. I was thinking something about analogy and irony that was producing some complex overintellectualized gobbledygook and paradoxical laughter. I still think about irony quite a bit, but one interesting thing is I really don’t like verbal irony that much.