Is global warming really happening and what does that mean for the disabled?

The Iditarod or whatever? Oh well, the times are changing.

That much is certain…I hope for the better.

Personally I believe it’s something I don’t worry about. There is a whole lot of ■■■■ coming down the pike in all sorts of ways that this earth has seen it’s life time coming to an end. I’m talking about the end of the world but don’t let me scare you. Things have seemed coming to an end ever since I was a young man. I’m glad I only have about 20 or less years to live. I hate this world mostly.

The only hope we have is science. We’ll have to terraform the earth before we ever have the chance to move onto another planet. Boom and bust, it’s the way of nature.

My friend just died. How I envy her…not that I’m suicidal but I’m already getting forced out of my home town by people coming from everywhere.

Yeah, I just hope its quick.

While I spent a couple years hoping for death I really can’t feel more opposed to it at this point. I want to live even if it all goes to ■■■■. There is a good chance I’ll get my mind back. Then it’s all about spending time with people. That’s the best part of life. People can be so cool.

Myself I find death a welcome thought though I am not suicidal. I just want to go to Heaven so bad is all. I have lost a lot of friends and I am sorry you lost your friend. It seems a tragedy that such a pretty woman should have problems like you speak of. I wish you could feel better.

I want to live too but if it gets to hot there will be no food. But your right. Best to focus on what really counts

The reason that the world is ending is because we didn’t evolve we devolved.

We are still so focused on primitive emotions like hate, lust , and greed that we are not able to ascend to the next level of being.

OK cover your eyes for this part.

So God is ending his experiment of humanity. DOH!!!

As for Alaska yeah your right about that for like the last at least 10yrs they’ve been trucking the snow into downtown where the race starts and ends because the combination of high temperatures and traffic pretty much clear the streets of snow.

Gods not doing ■■■■ he never has. We’re destroying the world that’s what’s really happening. Humanity rose up out of the animal kingdom conquered nature and is now murdering the planet. Just like mold on bread. Thanks @Joe Rogan.

I n what ways would global warming effect the disabled and not everyone else?

Yeah idk why she titled it that. Then starts talking about Alaska. Things should remain the way they are for at least the next 20 years. Nice use of rhetoric.

She tilted it that way cause that’s the way its going down. Whether you like it or not.

I don’t want the world to end. I have polo next week. And my Mercedes comes out of the shop next Tuesday.

Yeah GW is a sign the world is ending and I am looking forward to it.

Then we’ll all be normal because we’ll move forward leave behind the defects.

I think it means we’re screwed yet again.

We’ve always been a screwed people down here, nothing ever really changes here when you think about it.

Some work by Dr. Bojana Bajzelj, specifically The Positive Feedback Loop between the Impacts of Climate Change and Agricultural Expansion and Relocation and Importance of food-demand management for climate mitigation most likely will not reach the ears of the disabled or their caregivers. Not to mention the vast information available nationwide.

Some disabled folks need familiar environments where an established routine is consistent. AGW does not look good for this type of population.

The Warning has been communicated by compassionate activists. I am still grounding myself in this direction—to be a more respectable individual to this planet. My nation is wasteful and disrespectful.

LagoonLovely, do you ever see yourself praising Julia Butterfly Hill for her work? I praise her.

I see all the disposables in our society as a magnifying glass to what I call our “disposability consciousness.” We literally have a consciousness that is throwing life away. We consume approximately 14 generations of the Earth’s resources in one single generation, and most of that, we throw away (World Watch Institute). 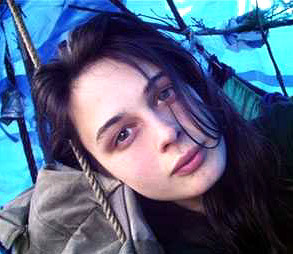 Out of her tree

Julia Butterfly Hill sat in a giant redwood for two years, then kicked the big boys' butts. Now her book's a bestseller and she's talking about a movie deal.