How much you pay for your sim

If you don’t mind me asking ?

£20 a month or just over. Can’t remember if it’s £20 or £21. Comes directly out my account. It’s for unlimited calls and texts and I get a few GB of data which I’ll never go through cause I always use it over my wireless hardly ever while I’m out.

From $10CDN to $20CDN depending on who your wireless carrier is.

I pay 84 a month for unlimited service, that is Canadian Dollars

Consider virgin mobile for 100gb data for that price I’m gonna get it but the deal is only instore.

Soon there will be embedded SIM or eSIM in smartphones and smaller devices like the Apple Watch Series 3. Nano-SIMs and SIM trays will be a thing of the past.

An eSIM is much smaller than a Nano-SIM and can be soldered onto smaller devices like a smartwatch. You can’t fit a SIM & tray onto a watch. The technology is being tested with the Series 3 Apple Watch to root out any bugs or problems before becoming mainstream.

Wait what’s the SIM stand for…

So it just seemed like another move on the telcomms part to trap consumers under one umbrella or the other… Unless they shell out for a new phone.

So it just seemed like another move on the telcomms part to trap consumers under one umbrella or the other… Unless they shell out for a new phone.

I’m saying it’s wrong lol… Not in denial about it happening… But it’s wrong.

We have fair access to water, natural gas, electrical power… Because the government maintains the prices… Because they are human needs…

I’m just hoping it changes… Right now we have big business in office in the states… But I’m hoping that more restrictions fall on cellular companies to make them get their ■■■■ in line… Do it right and provide some longevity… And then streamline there business models to reduce all that overhead… Cause really it’s complication is just a mask and an excuse for them justify price points that allow them to live their sickly dominant self centered lives… Totally at the expense of everyone else.

They are just about as bad as the auto industry

Cyclical consumption & planned obsolescence is a part of technological progression. For a person to use Windows XP in 2018 would really put that user at risk from hackers, malware & computer viruses.

Firms provide water supply, natural gas, electricity & Internet which are all basic necessities that households require to be fully sustainable. Cellular companies do need to generate revenue to keep business operations ongoing which is why they charge for cellular services and smart phones. 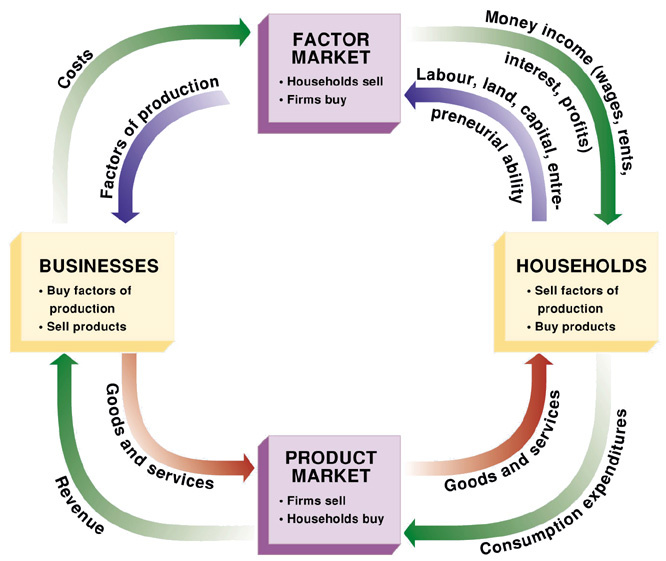 All in the foundations of macroeconomics.

But never mind man… I really can’t afford to get frustrated by this today.

It capitalizes on some very cruel things regarding human maturity…

…And has no respect for the consumer

I know loud and clear what angle you’re coming from… I personally can’t stand it… I’m sorry for being rude but I gotta tap out of this conversation.

yeah that is the party line but Microsoft could still support security updates long into the lifetime of the software but it becomes more sense to sell the whole new package to consumers.

Apple got caught out with their forced consumption updates and that was criminal. Most end consumers don’t profit from that and ultimately they pay more of a price than you could imagine.

Economics is the poorest science. If economists were so smart they could solve world poverty. Why don’t they? Because they are doing flow charts like this above to justify their jobs…