How long does abilify maintena 400mg injection stay in your system?

Ive been given a single injection of 400mg abilify maintena on february 11 of this year. Ive experienced every side effect from akathisia eps symptoms anhedonia and movements.

My question is how long till this poison is out. Everywhere i look up says the half life for 400mg maintena is 46.5 days. So does that really mean this drug will be coursing through my body for 232 days and effecting my receptors?. Ive never experienced such pain and suffering my whole entire life. Its going on 5 months since my last injection is anyone here good with the math of this. How much abilify do you think is still in my body? The first couple of months were torture no sleep 247 akathisia. But ive actually improved and getting sleep now. But still find a lack of interest in things and always laying down. Im ready for this poison to leave my body. I want my life back.

Something else may be causing the remaining issues at this point. There’s not going to be enough in your system, if even detectable at all, which it probably isn’t. Recovery from a psychotic episode can have effects like you are describing and can take months.

Well ive read places that general rule of thumb is 5x half lives for the drug to leave the system. (5x46.5) if thats the case than it would have to mean that there are still amounts of the drug in my system that are effecting me negatively and not allowing receptors to return to there normal function. My theory is that as long as its in my system it will continue to antagonise and agonise certain receptors and only cause further delay in allowing them to return to there natural function or for my brain to reach homeostasis.

So technically if the 5 half lives rule applies which seems that it does. Than 46.5 days after injection 7mg would remain in my system and 46.5 days after that half of the 7mg(3.5mg) would be in my system than 46.5 days after that 1.75mg and so forth. So based off of that i could have upwards of almost 2mg abilify still in my system to this day (5 months later) thats just crazy! My life hasnt been the same since starting this crap but i feel like there will be drastic changes for the better in the next few months since thats how much longer it would take to get the remaining abilify out of my system according to above calculations.

So does that really mean this drug will be coursing through my body for 232 days and effecting my receptors?

Roughly. But I don’t know at what level it becomes a non issue.

If you go to

Im sorry im a bit confused by how it can take 5 half lives and still have a remainder of 10mg after so long. Maybe its my bad brain fog ive gotten but im having alot of trouble making sense of this. I cant seem to find any information on how much of 400mg is administered daily i was assuming since it was a monthly dose it would be 400 ÷30 dosing you at 13.3mg daily. I cant seem to make any sense of this im just trying to find a date i can look forward to where i can feel comfortable saying its completely left my system

Do you mean at that time of 242 days 10mg remains to be distributed in a months time? And im not sure where the 50mg comes from.

There’s a certain level of receptor occupancy that seems to be necessary for antipsychotic activity and for side effects, as determined by PET scan studies. On the D2 receptors, occupancy above 50% can cause side effects. Occupancy above 65% is usually necessary to have an anti psychotic effect. It seems improbable that whatever small remainder there may be would be doing that. But, maybe you will feel better after the 200+ days, let us know.

That makes sense sorry i devided 400mg into a month than calculated half lives based on that. I thought the whole 400mg was used in a months time dont get how that works. Than again i havnt been able to read much or make sense of things since starting this. Im trying really hard thank you so much for providing these answers.

This is the top of Google results when it comes to searching about this matter… so I thought I would add my input to it.

Basically, it probably mostly depends on how long that you’ve been being treated with abilify. Steady state is after like 5 or 10 injections I forget. I only had 3 or 4, so that’s where I calculated mine from. Also another factor is BMI because body weight directly correlates to how fast the poison is circulated into your system (faster if you are heavier).

I’ve had 4 injections but the last one was 300mg only so that’s where my issue comes into play. But I estimated that the medication will be out of my system in 11 weeks (or rather INTO because we should really be discussing absorption half-lives NOT elimination half-lives; two different things). Any effects after that time should be the elimination half-life of ORAL Abilify considering all the medication is already into your system via fat tissues. Usually I find anti-psychotic withdrawals are about 2 weeks and directly correspond with their half-lives. So Abilifies half-life being 2 weeks… I’d say the LONGEST a person will have to wait is 3 to 3.5 months to feel normal again. Cheers.

Here is where I got the graph info,

And in case that site gets deleted, I put an image up on a photo sharing site (which doesn’t delete their images), here it is… 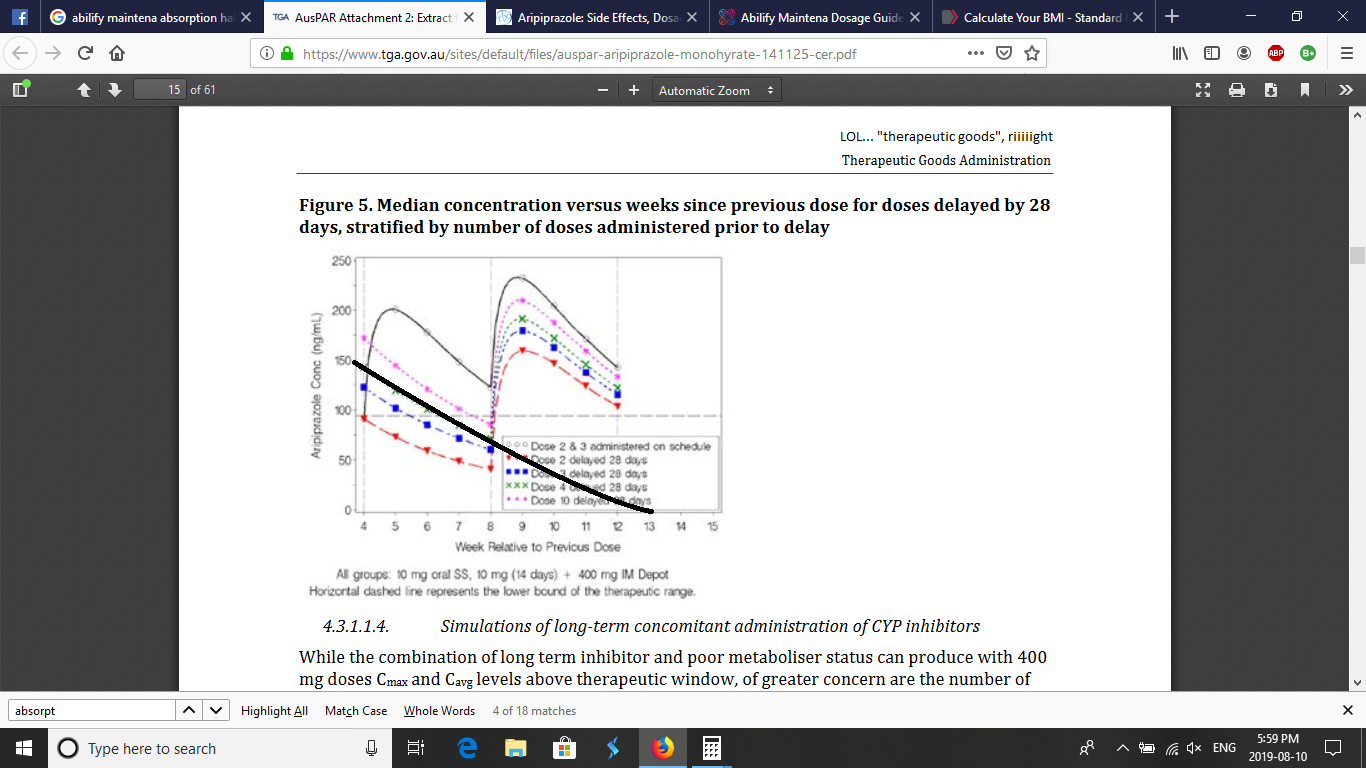 We should remember that we’re talking different numbers here… because the state at which the medication leaves your fat tissue is about equal per hour. The elimination half-life of Depot Abilify is rather irrelevant.

I’m sorry I’m writing this after so long but I really wish you’d respond to this post. I was just wondering how much time it took for you to finally get well (I suppose you’re doing alright now). I’m struggling with pretty much the same problem as described in the topic. Almost 4 months have passed since I was given a 400mg shot and to this day I feel terrible; I feel like I became really dumb, can’t understand people talking to me and I can’t even talk without stuttering, feels like aphasia. I’m really looking forward to get at least a little bit better because so much time has passed and I still fell awfully. Well, at least akathisia is almost gone, but every other side effect is still with me. I was given the shot 2nd march this year and it seems that 69 mg out of 400 are still remaining.

Typically, we like to leave inactive threads alone and just start a new thread instead. This is different than how some forums are run, but we do it this way because it frequently upsets users to have old topics revived when they are no longer relevant. It can also be frustrating to the person who revived the thread when they don’t get a reply, because the original poster is no longer active or no longer finds the topic relevant. Feel free to start a new thread on this topic.