Last night I was discouraged I really was struggling with a part of my homework. But I’m feeling better today.

Although I woke up to a text from my friend of s gravestone and RIP. Thought it was gonna be somebody else but it was our friend who died 1 1/2 years ago. Freaky stuff.

can I see a picture of the text? like a screenshot? I think you may need to reality check this.

Not the most pleasant way to wake up, that’s for sure. 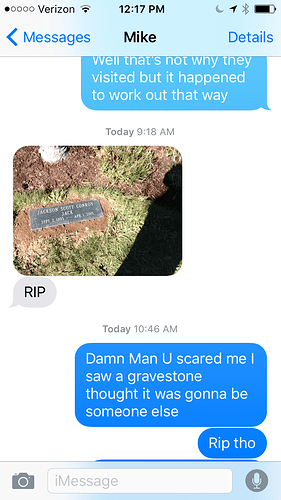 well i guess you really did!

Why did he text you that?

He visited his grave site today I guess. We had a common friend who overdosed on heroin. I actually met mike in June, but knew Jackson (the guy who od’d) back a couple years ago right before he died. So when I was like “did you know jack…?” He was like “no way you knew jack too!!! He was such a good kid…etc etc”. And we grieved together even though we weren’t friends yet when he was alive. So I guess he wanted to text me that cuz he visited his gravesite today.

Awful thing to wake up to though.

Well the good news is mike is six months sober from heroin! So he’s doing real well! He has sz too. We have a lot in common I’ll see him in December

Oh wow! He has a huge achievement under his belt, just like you!