Been like 6 weeks since he’s pooped outside his litter box. I was trying to give him medication. He took it twice then he was onto me…and figured out…stopped touching his food…so I gave up with the pill. But after the two doses of amiltryptamine it actually stopped…until today. I admit I had been bad at doing the litter box for a while might have contributed to his issue but today there was no excuse. I just bought a huge bag of the worlds best kitty litter and put fresh litter in. The poo looked kinda wet. Could he be sick??? Once I gave him bad food and that made him poop diarreah all over the room. His diet hadn’t changed at all recently.

Yeah you have to keep it fresh all the time or they stop using it apparently.

But he hadn’t done it for 6 weeks and it was as clean as it can be this time, the litter box. Just seems like odd timing. I could see like if I forgot about it one morning might be quick to be rebellious but not when I just put fresh litter in…

My mom thinks he was sick to do it.

I hope he’s ok. Hopefully he won’t make a habit of it .

The poo looked kinda wet. Could he be sick???

Yes, cat poo should be solid and firm. Have you made any diet changes lately?

If it’s a different kind of litter maybe he doesn’t like the smell.

Same litter. No diet changes. I mean it’s all fancy feast. Maybe a different flavor I’m not sure. Usually just grab random cans on the shelf

Does he eat any dry food?

Yeah I leave dry food out for him whenever he wants and give him a wet food can split into two portions a day…he goes crazy for the wet food while he eats the dry food as he chooses. He’s like 12.5 lbs the vet said he’s not small but definitely no where as big as my parents cat lol.

For the first year or a little less he would have diarrhea every time he ate wet food but he freaking loved it lol it was a treat he could only do dry food for a while. Then around one year he stopped getting loose bowels now I give him both every day. I think it’s good for them to have a mix. My parents cat is the opposite. Loves the dry food is so so about the wet food he’s got a huge appetite. My parents give him the dry food sparingly. Don Juan’s much easier because u can just leave a whole bowl of dry food for him while geno would eat the whole thing right away! 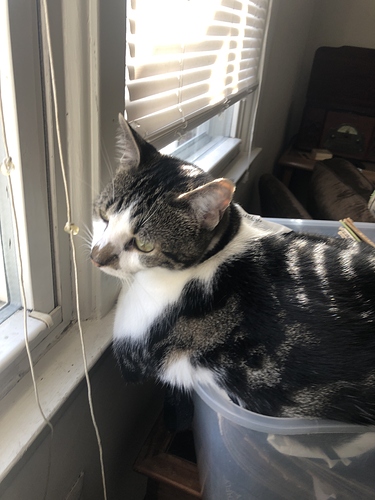 I love him chewy!

Damn she really gave herself up. Thought she was skinny. And she’s a transsexual no?? I thought u said.

Cats don’t understand punishment, I guess. What can you do?

That’s not ru Paul chewy. That’s one of her drag race contest. You should watch that show it funny

LOL I’d probably get a kick out of it.