Did a teacher ever give you a break? Like not get you in trouble for something you definitely should have been?

I got in trouble a lot, but occasionally, a teacher would be cool.

The first time it ever happened I was in seventh grade.

All year I had been picked last for every game, competition, and PE sport.

I was unpopular to say the least.

It was a private Christian school,

I was Jewish and weird.

Not a great mix, anyway,

What happened on the last day of school was interesting.

My most conservative and religious teacher was setting up for us to play a game.

She asked the “team captains” to pick people that usually aren’t picked first,

Because it was the last day, and thought she was doing something nice.

I was first picked.

Instead of going to my team’s side,

I knew I was going to get in trouble, but I couldn’t help myself.

My teacher pulled me out of the room.

She told me she understood my frustration and wouldn’t report it.

It was a big deal because I could have been suspended from the next year.

At the same school, a really cool teacher found a note I had written to a friend about how much I hate Christian school.

He read it in front of me after class and couldn’t make it through the note without laughing hysterically.

After he read the note and finished giggling.

He crumbled it up and threw it in the trash, told me to go to lunch.

At that ultra conservative school, the note could have got me expelled.

Those are just two that happened in middle school.

There are many more.

There were times in my life where I just stopped doing my work. Most of the teachers were ■■■■■■■■ about it, but a few were cool.

I was a straight A student, and then I would just start failing. One year, they asked me why I was suddenly failing English, which was definitely “my” subject, and I flat out told them that the teacher was an idiot, and that the work she gave was insulting and beneath me. That was my junior year of high school. She wanted me to not graduate. She insisted that I not graduate. But the principal stepped in, and said this girl has just been through chemo, blah blah blah, and he gave me a break. Let me take all the classes I ■■■■■■ up in – history (also told them the teacher was an idiot), pre-calculus (that teacher was nice, and said he’d do anything to help me) – over the summer to make it up.

Meanwhile, I went on to get into two Ivy League schools with my failing grades when I told them the teachers were idiots and beneath me. Ha ha, English teacher.

My creative writing teacher in 8th grade let me slide on my big project for the year. I couldn’t do it. She knew I was an excellent writer (I won the award for it at graduation) and also could see I was in a major depression. She also knew I’d tried to kill myself in April of that school year.

My sophomore year chemistry teacher – I busted my ass to make As in chemistry. I like chem a lot, but it doesn’t come naturally to me. So I worked hard for the first three semesters, then did some calculating, and realized that if I did nothing for my last semester, and failed the final, I’d still come out with a C. So that’s what I did. My teacher thought I was very clever, and thought I would make a good doctor. (I didn’t fail the final.)

So there were some good ones. I definitely had a few that I could talk to one on one like human beings.

There are probably more. I went to school while I was going through chemo, radiation, surgeries, all while battling this MI ■■■■■■■■ that no one knew what it was. (Bad grammar, sorry.)

Good on you getting into two Ivy League schools after all that ■■■■■■■■.

Thanks! My SATs were really high, and when they asked about my erratic grades, I flat out told them with brutal honesty what went on. I think they considered me some interesting thinker, and wanted that kind of diversity at their schools. I eventually wound up turning them down and going to NYU, though.

Not a teacher but the Dean of the University I was attending.

Without getting into details I did a stupid thing while being a member of a Fraternity.

He let me off the hook and it was a serious situation.

I could have gotten kicked out of school and could have faced the legal system.

He was very kind.

I was very lucky.

I blame it on Mania

I remember getting caught cheating on a math test in high school. Instead of failing me my teacher held me after class and made me retake it alone.

I was a trouble maker and was labelled with a “behavioural problem” in primary school and spent some time in detention and in the principles office, but my grade 9 high school geography teacher made it his mission to help straighten me out, then at the end of the year at the school awards he gave me the “most improved student” award.

He gave me a book all about Toronto (I live near there). It took some digging around but I found it, this is what he wrote inside it… 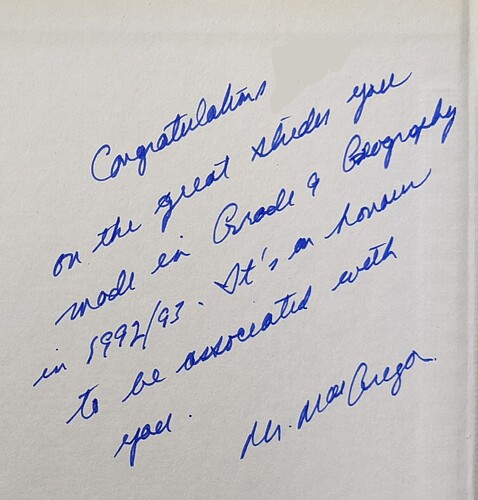 Yeah. When I was in high school I was bullied. My mom even told the school faculty. It didn’t really help. One day I finally stood up for myself. I beat up the bully. He went to the hospital and had a triple concussion. His family pressed charges. My English teacher at the time wrote a character reference letter to present in court. He didn’t have to but I am forever grateful he did. It was very kind of him to do so.

I sort of regret it to be honest. I ended up going to Juvenile Hall. He didn’t remember his grandma for awhile. What’s worse is that while we were going to court he challenged me to another fight. I didn’t want to deal with all the ■■■■■■■■ it caused. Luckily, he did stop bullying me. To be honest what really set me off is that he spanked my childhood sweetheart really hard once and she told me about it. That’s when I decided to beat him up. It didn’t help that his uncle/father was a police officer. I even tried to befriend him at one point… with a mutal friend we ended up baking cakes for our mothers on mother’s day. Poor kid was born of incest.

He was a big guy and part of the football team. He bullied a lot of people, for awhile I was hailed as a hero amongst my fellow nerds.