I’m curious about it.

Of course anyone can

They are human beings so, yea

Thanks, I read contrarictory opinions so I asked here.

I think I know one.

So does the sz make them less psychopaths bcz it disables them?

I thought one percent of the population is sociopathic. It makes sense to me, therefore, that 1% of schizophrenics are also sociopaths

Of course there can be. In example look at Richard Trenton Chase the vampire of Sacramento.

Of course there can be. In example look at Richard Trenton Chase the vampire of Sacramento.

Wow thats horrible, I just read about him, he was also a cannibal. I think the meds were helping him but his mother stopped his meds. Never stop your meds! 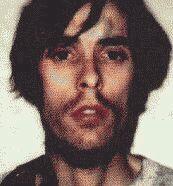 Richard Trenton Chase (May 23, 1950 – December 26, 1980) was an American serial killer, rapist, cannibal, and necrophile who killed six people in the span of a month in Sacramento, California. He was nicknamed The Vampire of Sacramento because he drank his victims' blood and cannibalized their remains. Chase was a native of Sacramento, California. By the age of 10, he exhibited evidence of all three parts of the Macdonald triad, an archaic theory suggesting the development of psychopathy. In ...

The statistics are worse. Like 30% of humanity has socio-pathy I think…correct me if I’m wrong. Then multiply the two together and you get your number. I think basic probability.

To reply to your question about psychopaths hearing voices; I would say yes; it is possible.

Persons who are antisocial and psychopathic can also have a major mental illness such as schizophrenia . If they manifest extreme aggression and difficult to manage behaviors, they may require intensive treatment in a maximum security hospital.

I wet the bed until I was 17 so maybe I’m a psychopath ha ha! Yes but most likely I’m not.

Most serial killers wet the bed until a late age ! Fun fact! Not all but a lot!

My ex wife was a sociopath.
She wasn’t schizophrenic but suffered with borderline personality disorder and DID.

She did awful things and had zero remorse.

At the time I was easy prey for her.

Many people with a schizophrenic disorder become easy targets.

I’m sure you were very popular…

People that didn’t like me weren’t as smart or good looking as me and I didn’t waste my time with them. They sucked. They lived from a long line of suckers and they weren’t as creative or interesting as me. But in general people liked me!