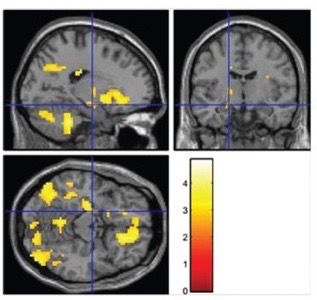 The researchers hypothesized that individuals with ASD(autistic spectrum disorder) and those with SPD(schizotypical personality disorder) would show impaired social judgment compared to controls, but that, consistent with the diametric model, those with SPD would show increased activation of these brain regions while making social judgments whereas the opposite pattern would be seen in ASD

Then why the hell aren’t my two conditions cancelling each other out?

That would be interesting. If autism was the cure for schizophrenia, then I’d say sign me up!

Then why the hell aren’t my two conditions cancelling each other out?

That’s a good point. You’d think based on the article that a combination of both conditions was contraindicated.

Complete lay person theory - maybe the ASD brain senses it is under performing so measures to increase activity kick in. But they go too far and you get a sz brain?

Psychosis in autism: comparison of the features of both conditions in a dually...

BackgroundThere is limited information on the presentation and characteristics of psychotic illness experienced by people with autism spectrum disorder (ASD).AimsTo describe autistic and psychotic phenomenology in a group of individuals with comorbid...

Diagnostic Characteristics of Psychosis and Autism Spectrum Disorder in...

If autism was the cure for schizophrenia, then I’d say sign me up!

I’m okay with the autism, wish more people had it so I could tolerate them. Being surrounded by people who value eye contact and watching sitcoms is irritating.

I used to work at a residential school for kids with autism, and let me tell you, when everyone you intetact with on a daily basis is autistic, you pick up some social habits. Including zero eye contact and clearly stating your feelings on any subject.

To all, my best friend has autism and sz. He has very difficult days.

clearly stating your feelings on any subject

Me to wife’s friend: I realize you’re of below average intelligence and can’t help that, but could you please stop speaking out loud? No one else needs to share in it.

Well there are ways of clearly stating your feelings without being a jerk about it. But things like “I don’t want to be here anymore, so I’m going,” or “Please stop talking because it hurts my ears.” Mr. Star’s favorite one at parties is, “Have I fulfilled my social quota for the day yet?”

Well there are ways of clearly stating your feelings without being a jerk about it.

I was up to my second attempt on my polite options and it was still yammering.

Edit: This is literally me in social situations except that part of my face hasn’t been shot off. Yet.

It can definitely take some practice, if social etiquette is not your native language. I think that’s something a lot of people who are fluent in it don’t understand.

When Mr. Star and I fight over things, he usually says, “You’re really angry and I don’t want to be here anymore. I’m going to mow the lawn.” And then he just leaves for two hours. It really ticks me off, but he’s riled up and doesn’t have the energy left to remember how to word things in the polite way. So I have to deal.

I know that I have friends my wife will enjoy visiting with and ones that she won’t. I don’t make her visit the ones who know the minutiae of the various editions of D&D, seasons of Doctor Who, or writing calls to a SQL database. The ones who like Shakespeare or fine art, I’ll make sure she’s there for those visits. She seems to think I’ll enjoy ALL of her friends, especially the ones who can expound at length for two hours about how they had their dog’s toenails done. Which blows my mind because I’m certain she’s actually smarter than I am in most ways.

I’m ok with family/step family but throw anyone else into the mix and it’s gets hard. I think family knows it’s hard for me to initiate conversations.

Last social gathering was at my gt grandchild’s birthday. I sat there like a dummy with my granddaughter’s boyfriend’s family there. My granddaughters spoke to me , but there was almost zero conversation between the others and me.

She seems to think I’ll enjoy ALL of her friends

Bwahaha it’s so me and Mr. Star! It’s not that I think he’ll enjoy all my friends so much as that I tell him he has a social quota and must be at certain specific social gatherings, regardless of whether he enjoys the people present. Because if he isn’t at at them, I have to fend off advances all night and I hate it. Certain creepy guys seem to take his absence as a sign that I’m available.

We recently started hosting more gatherings than we go to, so when he’s overwhelmed, he can just go to his office and lock the door. By now, all my friends understand it’s nothing personal, he just gets burnt out at parties. But we have our baby shower coming up, and he has to be present for the whole thing, and he is really not looking forward to it. I told him that staying at the party is the price of all the presents. He gets that.

Last social gathering was at my gt grandchild’s birthday. I sat there like a dummy with my granddaughter’s boyfriend’s family there. My granddaughters spoke to me , but there was almost zero conversation between the others and me.

I’ve heard a story of a monk and college professor who were friends. The monk would go to the professors house and they would make tea. All they did was sit by the fire and they didn’t say a word to each other.

You are just ahead of your time buddy.

I tell him he has a social quota

My wife gave up on that when she realized that she can force me into socializing, but that it may not be in a manner that reflects well upon her.

You’ve probably already guessed this, but I’m also the last person you want to include in a “team building exercise.” (With those I can be subtle, yet equally devastating.)

I guess that’s the difference. Mr. Star doesn’t understand social etiquette, but he does at least try. So when he messes up, people know he didn’t do it on purpose to be mean.