What do you see in this image?

Take a look at this picture, published more than 100 years ago in a German magazine. Do you see an animal? 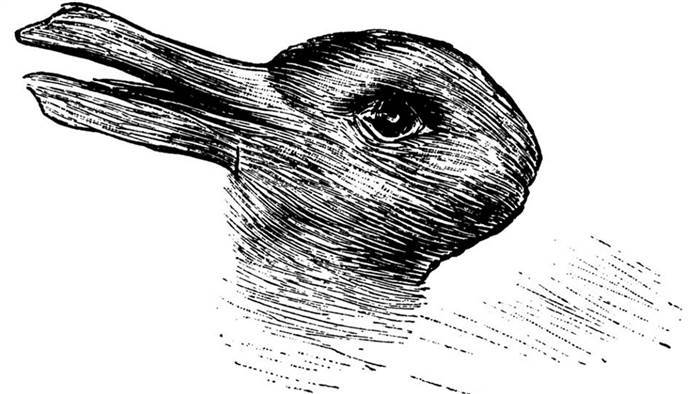 According to The Daily Mail the speed with which an observer can see one animal and then identify the other is an indication of the person’s creativity level.

And NBC’s “Today” said that Dr. Joseph Jastrow, a psychologist, determined that those who could see both a rabbit and a duck were also capable of coming up “with five unusual uses for an everyday item,” while those who saw only one animal or the other were able to only come up “with two unexpected uses for that same everyday item.”

The Daily Mail also notes that test results can vary at different times of the year. For example, children taking the test are more likely to see a rabbit around Easter.

The image recently re-emerged on social media, with users around the world taking the personality test

I saw a Rabbit first then a few seconds later a Duck.

I saw a duck then the rabbit. I like this picture.

Im not sure wich one came first. They both came almost instantly.

Saw a Duck at first then quickly a Rabbit - Pretty Neat!

I saw this distributing half duck half rabbit creature…

I thought it was a seagull and then a rabbit right away too.

I saw this distributing half duck half rabbit creature…

Did you mean disturbing ? Both are to me duck + rabbit, too. First I saw the bill, then the head, then all together - duck. From the question, I looked for a second animal + saw the disturbing rabbit. Each was separate.

I saw a chicken and then an egg or was it the other way around? Knot sure which witch is which

I did mean disturbing oops XD. I saw some weird hybrid version mashed together. Freaky…

It was obviously not a drawing of a normal rabbit or duck - mashed together does seem disturbuting.

I saw a duck first and then very soon after a rabbit.

The beak does make it look more like a seagull then a duck.

I saw a duck and never saw a rabbit until I read all your post. Even after if I know we can see it as a rabbit, it’s difficult for me to see it as one. . . rabbit’s ears don’t look like these.

A SnaiL RACEING ON WATER DONT YOU SEEIT

Yes I see it. I also see a muppet

I saw only duck at first. I saw rabbit then when you mentioned it in the paragraph.
Note that I have to use “full mental power” to identify the rabbit.

May be I was looking it from left to right in the picture.