What did you make/eat for dinner tonight?

Truth be told I just want you to be jealous of my alfredo with chicken and brocolli recipe. I call it: my not-so-famous alfredo. 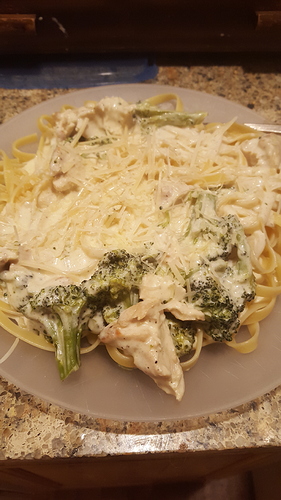 I was at my friends house, and her parents are from Poland. I had a meal of perogies and pickle soup. Yes, pickle soup. It was…good…or so I said

It looks very good. I went out with my gf and our 1 year old we had chinese…well american chinese cooked by mexicans run by a japanese woman but whatever it was nice and we now know my baby Ivan likes sushi.

It looks great. I’m not really jealous because it’s 9 in the morning and I’m having coffee

But I’ll come back later

Had chicken and chorizo at my folks last night.

I had a hot link sandwich - bad for my cholesterol, but delicious.

I made chicken marsala last night. New easier recipe than the one I was using. Tonight it’s slow cooker corned beef and cabbage which I had better get started if we plan on eating before 10 pm.

Looks good!!! I had lasagna and salad for dinner last night.

Alright, I came back and I’m definitely jealous now. Don’t know what to eat for dinner tonight.

I baked salmon with lemon-pepper seasoning, we had it with macaroni and cheese on the side, and a kale salad. Yummy! Your dinner looks awesome too!
I saw a video the other day of a chef stirring linguini noodles around on a wheel of Parmesan cheese that he had lit on fire so it was melting as he was stirring the pasta around. Gotta love the cheese.

It’s a super easy recipe I modified from one online. Takes like 20 minute to make, mostly because of the chicken and broccoli.

I will eat chicken but in cordon bleu, it’s also delish

Last night I had steak topped with mushrooms and onions. The sides were pasta and brussels sprouts. Tonight is pork chops with undecided side dishes.

Right now I am cooking a hamburger to be put in a bagel, for breakfast, at 3 pm.

Hamburger for breakfast? The world is right with me in this moment.

It’s so nice to eat whatever you want. Especially the bagel I am going to be using. It’s the cheesey one from Costco. I’ve never done this before but I’m excited.

I’ll find out in ten minutes what the cafeteria is serving tonight and then I’ll get back to you.

Only had a few almonds, and a couple spoonfuls of nutella, earlier drank a mixture of coffee, protein powder, honey, and milk

home made chicken pot pie and a salad for dinner.

And tons and tons of crow. In fact I went back for thirds on the crow.