…but after been fishing for five hours in tough terrain, and a 30 km bike ride, I was so tired I could hardly lift the knife to gut them and remove scales.

I threw them out, and now I feel a little bad they died for no reason. 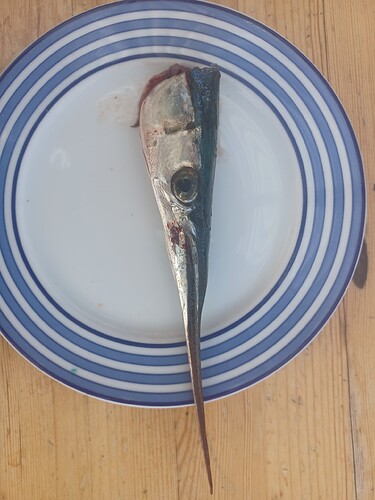 I would not want to get in a fencing match with that kind of fish.

Or someone holding that fish

On a more serious note my dad has been telling me of all the lakes I can visit once I get my fishing float tube.

Looking forward to fishing this year. Our season does not officially open for another week though.

Once I went on a fishing boat I caught 12 fish. The 13th fish was a bass it fell off my hook. Unlucky 13. I didn’t catch another fish the last hour there. We caught a buncha sea Robin and porgys and even sharks and bluefish. I didn’t catch a shark tho it was mostly sheer luck

I was spoiled enough to go to Alaska twice for fishing.

My first time there I caught a 69 pound Halibut which was the biggest catch of the day. Believe me it took my 12 year old self an hour to reel it in and the boat captain had to shoot the thing before bringing it onboard.

Second time I went bank fishing for Silver Salmon. That was a lot of fun. My cousins are snots but the fishing was awesome.

Going after Bass, Northerns, Panfish, and Lake Trout this year. I have to remember to get a Trout stamp too.

We were lucky to always have a boat. We recently got rid of the boat. No more boat. But we would fish a lot in my younger years. But on the Long Island sound. Not the best fish here. Once we caught like 40 sea robins between 4 of us in a 30 minute span. There’s lots of sea robins here they aren’t really edible. They’re poisonous if you cut it wrong. And barely any good meat. So you throw em back but they sure do love calamari on a hook

We were lucky to always have a boat

We have a boat too but now nothing to haul it with until dad gets new brakelines in his Suburban.

Yup! In my younger years I spent so much time in an ice house during the winter and sitting next to the river in the summer. My dad taught me well.

I gave fishing up for a while but now I am looking to get back into it.