The Causes of Schizophrenia: It's Probably Not Genetics

The Causes of Schizophrenia: It's Probably Not Genetics

For more than a century, researchers have had a deeply-held belief that schizophrenia is one form of mental illness that has its basis in genetics. In the intervening years, hundreds of millions of

It’s mainly epigenetics and other gene-environment interactions. Pure environmental effects are about as rare as the pure genetic effects. Children with little genetic risk raised in families with high levels of environmental risk factors do not have a much increased risk of developing sz. It takes both kinds of risk, genetic and environmental, for the total increased risk to be large.

The point is that this absence of large purely genetic effects does not mean sz is any more of a psychological condition.

Hiya. You have somehow summoned me.

Genetic causes are not 100% sure on schizophrenia. OMIM listings on schizophrenia are not actually causes but just “assumptions”. And we don’t even know how it is inherited.

So there is more research to be done.

Do u guys mean there wont be any medication for schizophrenia…!!!

@laetitia @everhopeful @anon9798425
its not genetic then what…

What about medication …!!! is it an Unapprochable mental illness…!!

No it doesn’t mean that.

There are still identifiable chemical, cellular, structural and electrical changes in brains with sz, whether an individual case is more genetic, or more environmentally influenced. Those changes are what can be targeted with new treatments, and existing ones too.

What I know is that I had symptoms from the age of 8. 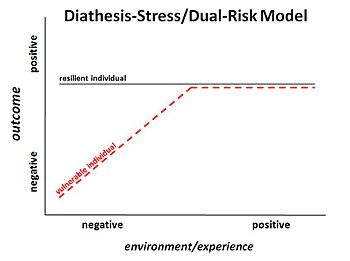 The diathesis–stress model is a psychological theory that attempts to explain a disorder, or its trajectory, as the result of an interaction between a predispositional vulnerability and a stress caused by life experiences. The term diathesis derives from the Greek term (διάθεσις) for a predisposition, or sensibility. A diathesis can take the form of genetic, psychological, biological, or situational factors. A large range of differences exists among individuals' vulnerabilities to the develop Th...

Not sure if that model is outdated now. I know a lot of us have a downturn in how we are when stress levels increase.
For me it’s increased anxiety,irrationality,paranoia, and my cognitive functioning takes a hit.